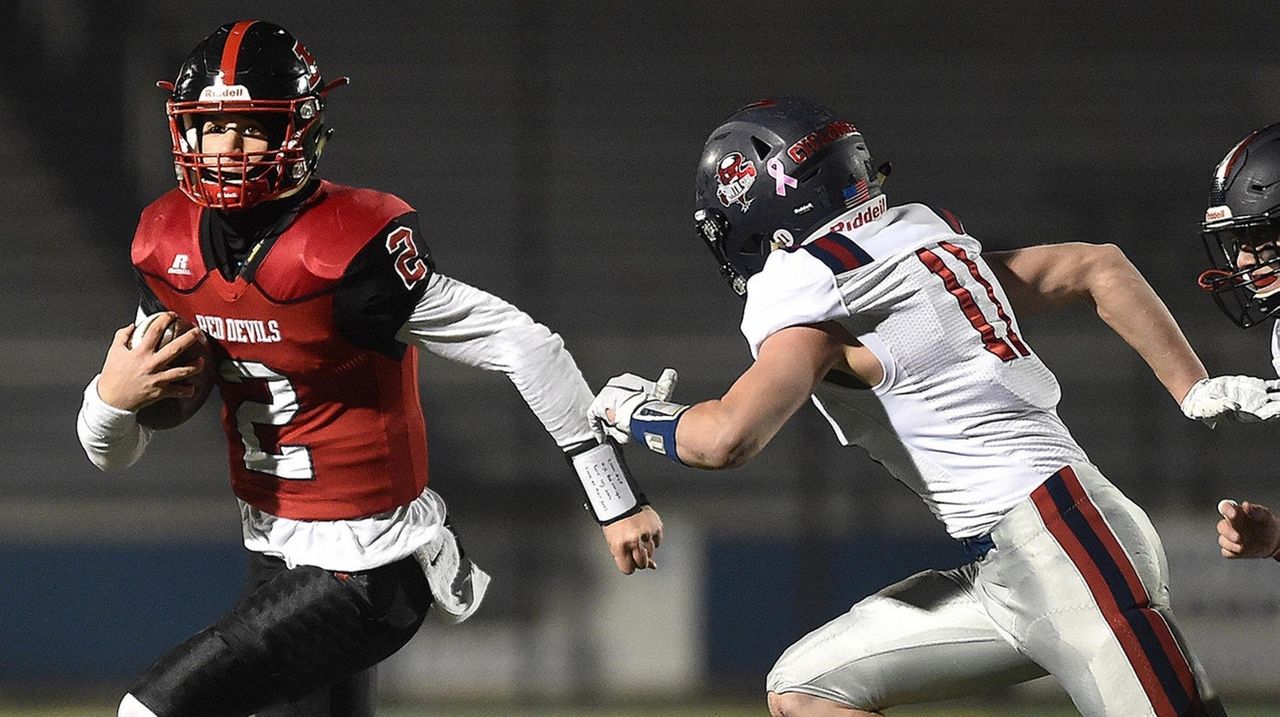 It was spectacular. Just not a national spectacle.

Plainedge overwhelmed South Side on both sides of the football for the second time in two meetings this season, rolling to a 41-13 victory in the Nassau Conference III championship game Friday night at Hofstra’s Shuart Stadium.

The regular-season meeting — a 61-13 win in a battle of unbeatens — earned Red Devils coach Rob Shaver a controversial suspension for violating a county rule intended to prevent teams from running up the score. This victory earned Plainedge (11-0) a trip to the Long Island Championships and a date with unbeaten Sayville in the Long Island Class III title game at noon Friday at Stony Brook University.

Plainedge fell to Half Hollow Hills West in the 2018 LIC after quarterback Dan Villari suffered a broken humerus bone on a hit early in the game. He and all of the other returning players made it their mission to earn one more try at the ultimate victory.

“Since last year when we lost that game, all of us returning players have had the same thing in our minds — we couldn’t wait for this season and to get back to the LIC,” said Villari, who had a Superman shirt peeking out from under his uniform. “You think about it every day and this feels great. I really want the feeling of winning the last game.”

South Side quarterback William Pickett threw his second touchdown pass to Nick LiCalzi, a 19-yarder with 8:10 left in the game, to make the score 41-13.

Plainedge was even more overpowering in the Oct. 25 meeting. The suspension of Shaver brought national scrutiny of the three-year-old county provision that dictates that a committee review a coach’s explanation for wins by more than 42 points. Though South Side coach Phil Onesto did not believe the score had been run up, Shaver drew the first suspension in 10 cases over three years.

“If that ruckus was going to happen to somebody, I’m glad it happened to me,” Shaver said. “To be honest, that stuff doesn’t bother me. I didn’t go out and do interviews because that’s not me. Do I think it’s a stupid rule? Yes. But things happen and it’s over with.”

The Red Devils have reached the big game they’ve waited a year for, but Shaver, too, has been waiting. He’s taken three teams to the LIC and still is seeking his first Long Island title.

“Do you want to win that last one? Absolutely,” Shaver said. “We knew we had a good team coming back with a lot of key players. This is what we’ve been getting ready for.”

Added Kuinlan, “We know this will be our hardest game, but we’re ready for it.”