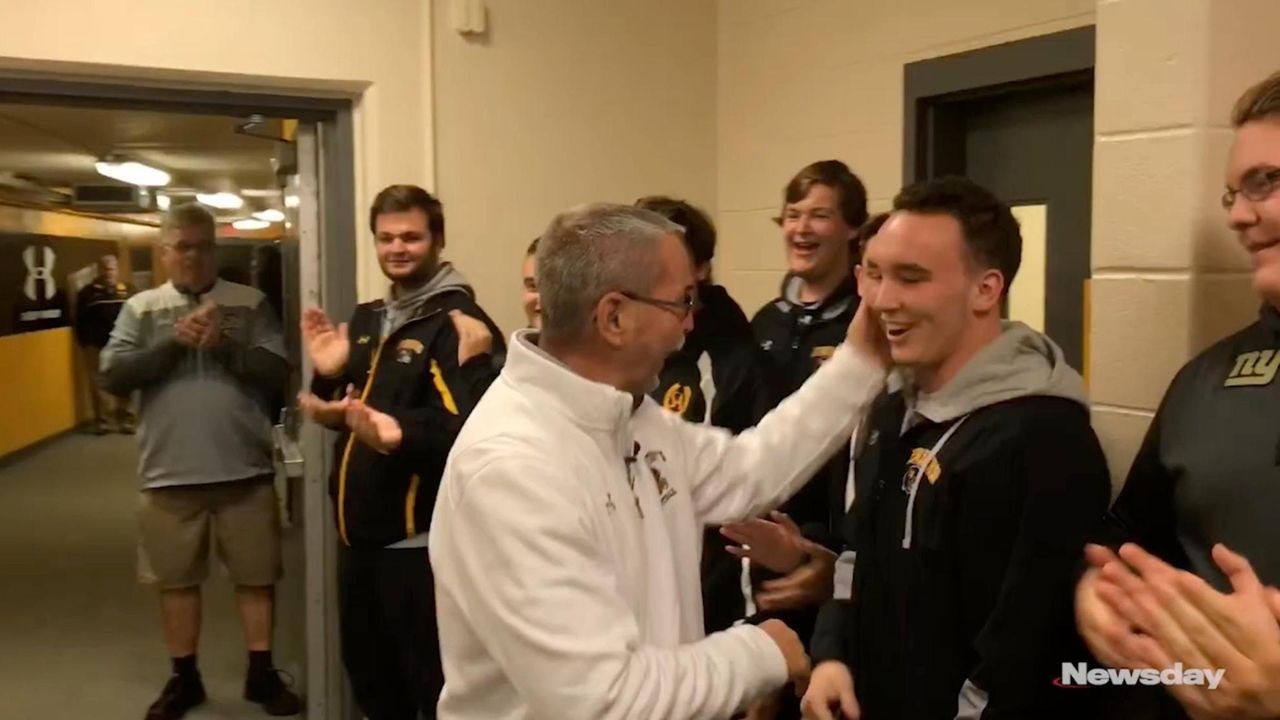 They are Friars forever. And they came — more than 300 strong — to salute the man who impacted their lives during their careers at St. Anthony’s High School.

Former teammates and players, spanning parts of five decades, converged on St. Anthony’s Friday night to salute Rich Reichert in his last regular season home game as football coach. Suffolk’s all-time winningest coach has announced that he is retiring after the season.

After warmups for the game against Iona Prep, Reichert walked to the school’s fieldhouse for his pregame speech. He descended the stairs into a virtual twilight zone. The doors to the facility swung open and Reichert was stopped in his tracks. Former players lined the way to the locker room — a gauntlet of men standing side by side, greeting him in a sea of hugs, handshakes and tears. All of his boys.

And now they were men built on the foundation set by Reichert over the past 32 years. Fathers, brothers, men of faith, doctors, lawyers, servicemen, policemen, firefighters, business owners. All came to share in the moment.

“That was overwhelming,” Reichert said after Friday night’s stirring 43-33 victory over Iona Prep. “I had no idea. I don’t know how they kept it quiet. There were guys from the very first team I coached. My teammates were there — it was unbelievable.”

It was a testament to Reichert’s legacy steeped in the Friars’ winning tradition and his love for his players. He will walk away from the job he’s embraced on his own terms. He said it was time to really enjoy his family, especially his wife of 41 years, Maryann. And it was time to give a younger coach an opportunity to build his own legacy.

“It was never about me,” Reichert said. “It was always about St. Anthony’s and the players. It was always about the school and what it offered to young people in a way that helped them to be molded into young men with a purpose. My job was to guide and teach. The winning would take care of itself.”

Reichert graduated from St. Anthony’s in 1970 and went to St. John’s University. He retired as a Nassau County police officer of 23 years in 2003.

“He felt the timing was perfect,” Mary Ann said. “He’ll have time to be with our two girls and his eight-year-old grandson Ben. And he loves watching our son Rich Jr. coach.”

Reichert’s impact at St. Anthony’s will be felt for many years.

“This is a man who’s invested his life into other people’s children, turning boys into men,” said Brother Gary Cregan, the principal at St. Anthony’s. “He’s an institution. These men that came here to celebrate this coach did so because they looked to him as a father, not just a coach. He cared for the individual person as much as the win. That’s what makes him so unique. He intimately connected to our students and school.”

Reichert turned St. Anthony’s into a football powerhouse, winning 14 CHSFL AAA titles. His record of 265-65-3 and winning percentage of .803 is tops in Suffolk.

Keiron Bigby, a 1983 graduate, fondly remembers Reichert, who was new to the Friars coaching staff in Bigby’s senior year.

“When I was a senior there weren’t too many people of color at St. Anthony’s and coach Reichert was always there for me and so supportive,” said Bigby, who played basketball and football at Brown University and earned a Super Bowl ring with the Washington Redskins in 1988. “I was from Central Islip and he connected with me and helped me through some difficult times. He was a very important influence in my life.”

Bigby, 52, who owns a liquor company, is not surprised at Reichert’s legacy.

“He was a St. Anthony’s alum and understood what the school was all about,” Bigby said. “He was dedicated to molding young people. He emphasized diversity and was sensitive to the issue. There were few African American quarterbacks and I dealt with many slurs in my day. I always knew I had coach Reichert’s support and that left an impression.”

Former player Tom Monaghan, a 1986 graduate, said Reichert was successful on every level because he was loyal to people and stuck to his principles.

“I coached with him for 14 years and it was a privilege to be on his staff and learn from him,” Monaghan said. “He treated people fairly. He taught me as a young coach to give every player a fair shot. His philosophy is to play as many people as possible. He rarely allows guys to play both ways. And special teams are comprised of 11 more of his players. He gave everyone a chance and that resonates when you’re an adult.”

Monaghan said when he sent the email that informed people of plans to honor Reichert Friday night, there were more than 50 responses in 10 minutes.

Reichert coached just over 1,200 players in his career. And every time he runs into a former player he first asks, “How’s your family?’’ He cares deeply for people. He’s genuine.

“Don’t mistake kindness for weakness,” said St. Anthony’s athletic director Joe Minucci, who graduated in 2004. “He could be tough when he it was warranted. He understands implicitly how to deal with young people. He patiently works in our weight room to give students a plan of action, direction, encouragement and discipline to stick with it.”

Matt McLees, who graduated in 1982, went to Southern Connecticut and played for the Cleveland Browns in 1987 and is the current Nassau high school football coordinator and district athletic director for Sewanhaka Schools, was emotional revealing Reichert’s impact on his life.

“He treated players lovingly and fairly,” McLees said. “When he needed to have a hard hand and lay the wood he could do it without humiliating the player. He championed good men. My son loves him.”

“I became a leader in my field because of my experience with St. Anthony’s football under coach Reichert,” Tyler McLees said. “There was discipline and accountability and it built a strong foundation. And now I serve my country.”

Reichert said the high school experience should be one students never forget.

“You never forget your high school days,” Reichert said. “I know I didn’t.”

As Reichert walked from the field after Friday’s win that gave the Friars a 6-1 record and a first-round playoff bye, he was surrounded by an army of friends and grads. They crammed into fieldhouse and sang the school fight song with Reichert leading the booming melody.

How fitting it would be if he goes out singing one more time after the CHSFL title game.

*Most wins in Suffolk football history: 265