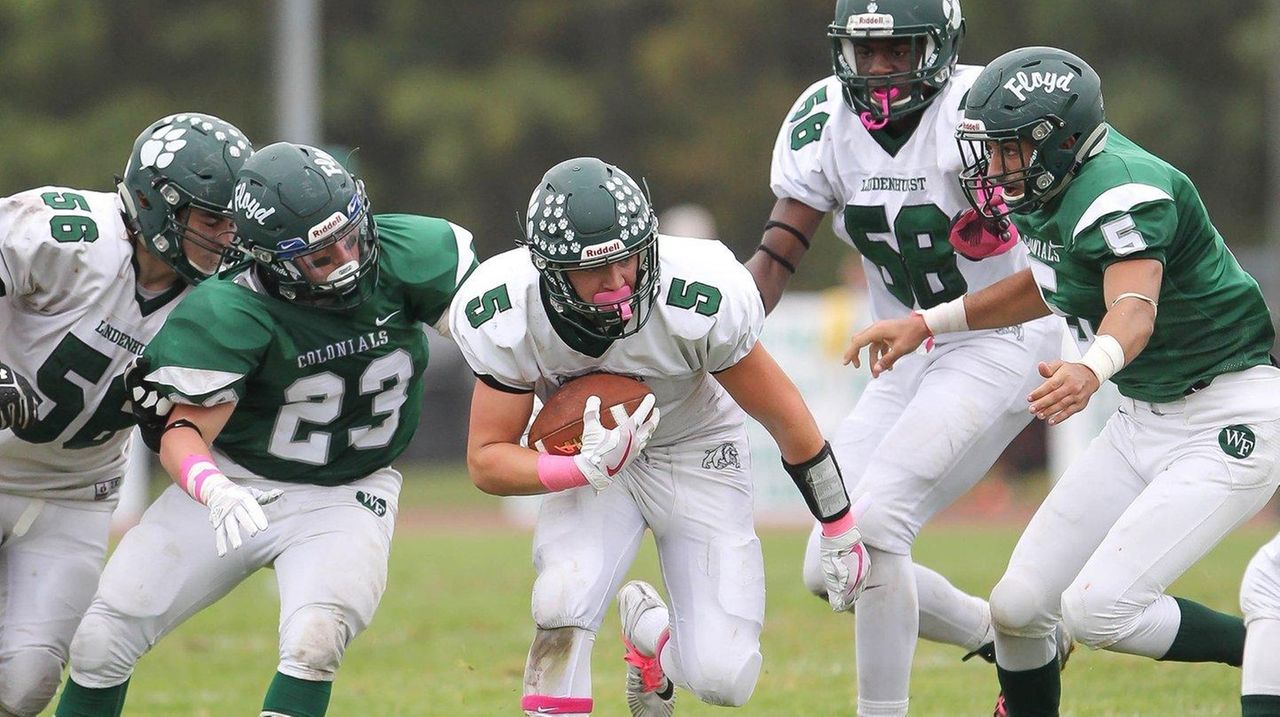 When they come on back-to-back possessions, it’s fourth-and-downright dominating.

In a type of game indicative of the caliber of teams on the field, Lindenhurst and Floyd traded blows for much of the first three quarters. But with the Bulldogs leading by a touchdown late in the fourth quarter, the Floyd offense was suffocated on consecutive drives, both ending with unsuccessful runs on fourth-and-short.

Lindenhurst’s Ricky Conway tacked on his second touchdown of the game with a 14-yard scamper immediately following the second turnover on downs, and his bullish performance lifted the Bulldogs to a 21-7 win over the host Colonials Saturday in Suffolk I football.

“We were living in the backfield,” said Jeremy Ruckert, whose contributions at defensive end (1 1⁄2 sacks) complemented his performance on offense (five catches, 100 yards, one touchdown). “That was the biggest key to this game. We didn’t give them any holes.”

Floyd runners Nick Silva, James Taitt and Mack Driver ran hard, but holes collapsed quickly as Ruckert and his younger brother, Will, Malik Grant, Sunkonmi Agunloye and others won the battle in the trenches.

With 6:35 left in the fourth quarter and Lindenhurst leading 14-7, Floyd lined up for an attempt on fourth down and a long one. Silva took the carry up the middle but was met immediately by a swarm of Bulldogs at Floyd’s 14-yard line — similar to his previous attempt on fourth-and-1 the previous drive.

On the next play from scrimmage, Conway’s hard-nosed touchdown run through traffic sealed the win.

Conway credited an offensive line of Mike Bradley, Jeff Perez, Will Ruckert, Grant and Agunloye for helping him grind out tough yardage.

Grant said watching Conway score is like “we’re scoring because we know we did our job to get him in the end zone.”

The running back also ran in a 17-yard score on the first play of a drive that started after Justin Zotto jumped a route, intercepting Rob Taiani’s pass and giving Lindenhurst excellent field position.

While Lindenhurst enjoyed optimal starting points on its drives, Floyd faced long fields on many of its possessions. Jeremy Ruckert’s four booming kickoffs resulted in touchbacks each time. In the fourth quarter, Conway’s low line-drive punt pinned Floyd at its own 4-yard line.

This set up the defense to execute.

“The defense came with a mission to really strap themselves down and get into the backfield,” coach Nick Lombardo said. “They did a really nice job of forcing the quarterback into some interesting decisions.”

Although Taiani was forced to make errant throws because of constant pressure, his counterpart, Nick Anzalone, was an effective game manager. He completed 14 of 24 passes for 148 yards, a touchdown and an interception on a deep attempt to Ruckert in the end zone.

But make no mistake, Lindenhurst’s win to stay undefeated was all about a defense that played with a high intensity on every play. The Bulldogs tallied five sacks and stopped the Colonials’ ballcarriers behind the line of scrimmage five times.

That’s just how the Bulldogs drew it up.

“I think our defensive line came to play today,” Lombardo said. “I think they did a great job of following our defensive coordinator’s game plan, and they just played well.”