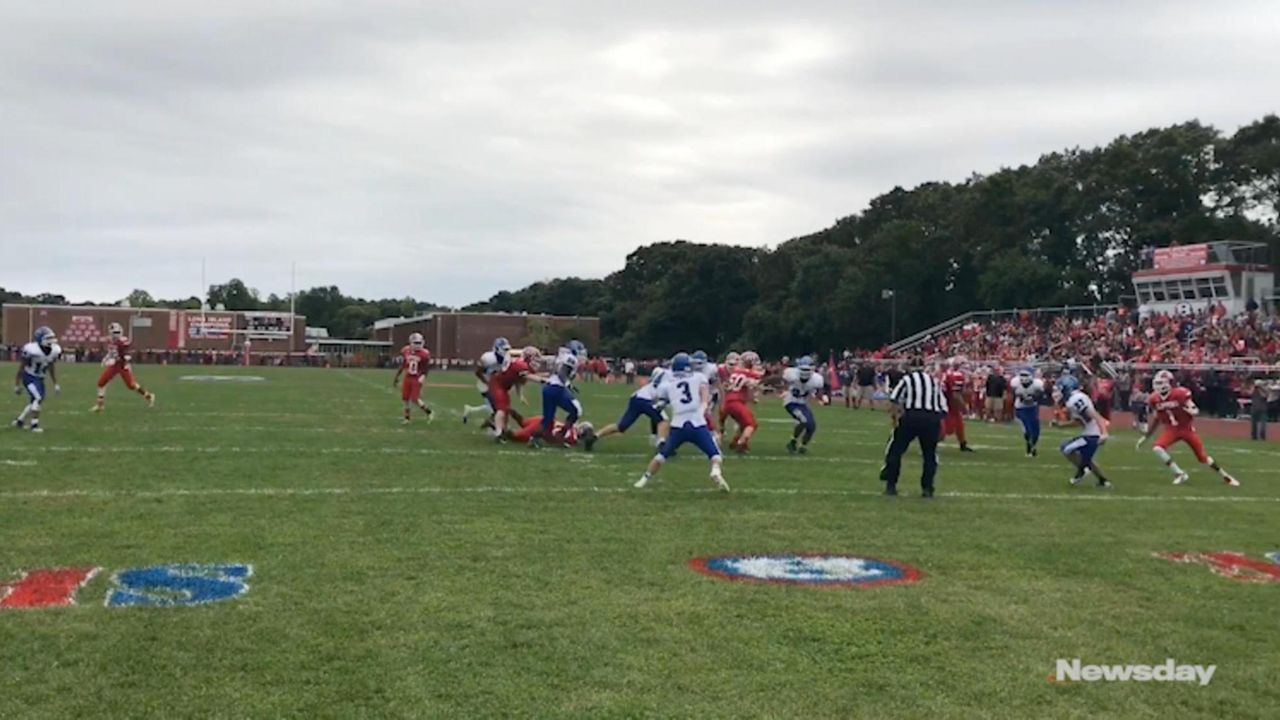 DJ Trent rushed for 40 yards and a touchdown in Bellport’s 35-8 win over Riverhead in a Suffolk II football game on Saturday, Oct. 6, 2018. Credit: Newsday / Kenny DeJohn

Defining Ka’Shaun Parrish as a quarterback limits the scope of his impact. Simply put, he’s a playmaker. On Saturday, he made plays.

The sophomore rushed 10 times for 99 yards and two touchdowns, completed 5 of 12 passes for 72 yards, caught a 28-yard trick-play pass that led to a TD, and returned a kick 74 yards that set up another score in Bellport's 35-8 homecoming win over Riverhead in a Suffolk II football game.

Parrish set the tone with an 8-yard rushing touchdown in the first quarter and the Clippers (3-2) never looked back.

“My linemen, they did a good job, helped me get time to throw the ball and run,” he said. “We just did our thing.”

A running back on junior varsity, Parrish was converted to quarterback this season by coach Jamie Fabian out of necessity. He’s a slippery runner who broke countless tackles in the backfield to gain positive yardage.

That happened with 7:23 left in the second quarter on fourth-and-6 from Riverhead’s 41-yard line. Parrish felt pressure and scrambled, shifting direction and shedding oncoming defenders to run 41 yards for a touchdown and a 15-0 lead.

“With Ka’Shaun, I think it’s his speed, his elusiveness,” said senior running back DJ Trent, who ran 12 times for 40 yards and a touchdown. “He likes to make moves, dance on people. I like that about him. His mentality, he does not like to lose.”

Trent benefitted from Parrish’s 74-yard kick return, which came after Riverhead's Cristian Pace found Anthony Marcello for a 14-yard TD pass with 1:30 left in the first half.

On the first play of Bellport's drive, Trent ran 9 yards into the end zone, with key blocks on the offensive line setting up the score. It was a much needed answer to the Blue Waves' touchdown and gave the Clippers a 22-8 lead.

Riverhead (2-3) didn’t kick or punt to Parrish again. The Blue Waves opted to punt out of bounds or squib kick to another returner instead.

“I think he’s gained some attention in the county,” Fabian said. “Not a lot of people kick to us.”

Parrish had another explosive play in his back pocket. On Bellport’s second offensive play of the third quarter, Parrish took the snap in shotgun and handed to running back Jhamari Bell. Parrish then zipped up the sideline and hauled in a long pass from Bell, a gain of 28 yards to the 20-yard line.

“This is my first homecoming, so I was really nervous at first,” Parrish said. “But then, as soon as I got the first play, I was normal. I was really into it.”

Bell finished the drive by recovering his own fumble in the end zone after a 13-yard run, putting the Clippers ahead 28-8. On Riverhead’s next possession, Kyler Pizzo returned an interception 21 yards for another Bellport touchdown and a 35-8 lead.

The rout was made possible by the sophomore quarterback who was anything but limited to playing in the pocket.

Said Trent: “Ka’Shaun, he’s what I would call a ‘super-athlete.’ I love the kid to death, and he works hard.”