James McHugh #1 of Seaford rushes for a touchdown to give the Vikings a 20-14 lead in the third quarter of a Nassau County Conference IV football game against host Clarke High School in Westbury on Saturday, April 10, 2021. He rushed for a successful two-point conversion on the following play. Seaford went on to win by a score of 28-14. Credit: James Escher

James McHugh may be somewhat lacking in the experience department, but entering Saturday afternoon’s action, it was certainly hard to tell simply based on the numbers.

The junior running back, despite playing in just his first season on Seaford’s varsity football squad, came into the day leading Nassau County in rushing yards at 512.

And with the score tied in the second half, McHugh once again reminded everyone of his unique talent, beginning on the defensive side with a game-changing interception followed by a go-ahead touchdown, sparking Seaford to a 28-14 victory at Clarke in Nassau Conference IV.

"James is unbelievable," Seaford running back Tom Kofod said. "Without him we would not be undefeated." 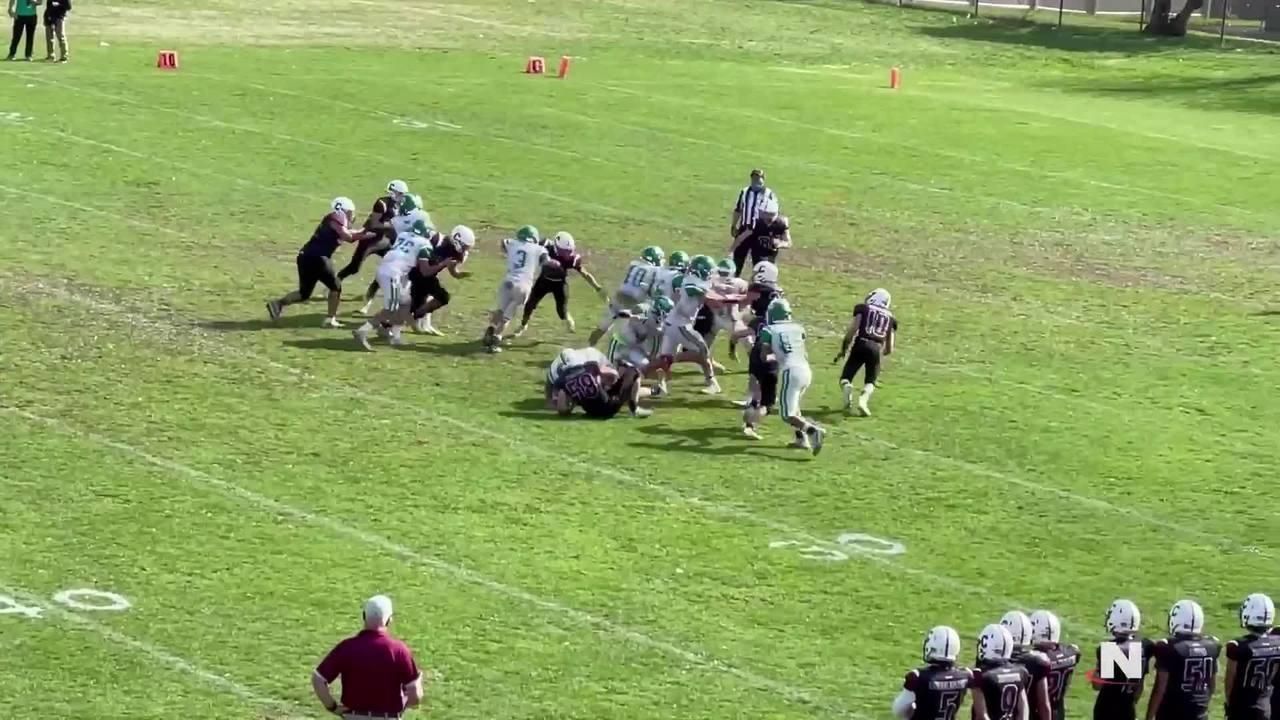 As Clarke (3-2) threatened to take the lead on the opening possession of the second half, McHugh, who also had 10 tackles playing defensive back, jumped the route on 3rd-and-goal, picked off the pass and returned it to the end zone.

Though the score was negated due to an illegal block in the back penalty, McHugh capitalized nonetheless, finishing off the drive with a 13-yard rushing touchdown and two-point conversion run that gave Seaford (4-0) a 22-14 edge. He recorded 15 carries for 151 yards and a touchdown on the day.

"I give all the credit to my offensive line," McHugh said. "Without them and the blocking they do I wouldn’t be having a season like this."

"He’s been huge for us and he was a junior varsity player last season," Seaford coach Rob Perpall said of McHugh. "The development of guys like James, Tom and Jake shows that the players believe in what we do."

Murphy also provided Seaford with plenty of punch with 12 carries for 127 yards and a touchdown, as well as 13 tackles.

Another Seaford running back, John Raucci, helped extend the Vikings’ lead to two possessions at 28-14 as he scampered down the right sideline and outran the defense for a 65-yard touchdown on his lone carry of the game with 9:55 remaining.

"It was a sweep play and I saw a hole," Raucci said. "Kofod made a big block and I just cut and broke loose."

Kofod did just the same toward the end of the first quarter, as he burst through the middle for a 57-yard touchdown. He finished with five carries for 78 yards and a touchdown. McHugh followed up with a two-point conversion run to give Seaford a 14-6 advantage.

Clarke tied the score at 14 with 6:17 remaining in the first half after quarterback Nick Giardino lofted a 15-yard touchdown pass to Joe Dieppa, who also ran in a two-point conversion.

After that, it was all McHugh and the Vikings.

"It’s awesome having a player like James," Raucci said. "He’s a great player and there’s just no one like him."