He is the X Factor!

Xavier Arline has earned the nickname through a variety of tantalizing touchdown runs. On Sunday, the senior quarterback gave Shoreham-Wading River fans three more to talk about in the Suffolk Division IV championship game.

A modest crowd of 500 braved a 30-mph crosswind and slashing rain as Arline and a gritty Wildcats defense captured the school’s second straight Suffolk title. Shoreham-Wading River scored 22 unanswered points in a span of 5:40 to erase a 14-13 deficit. 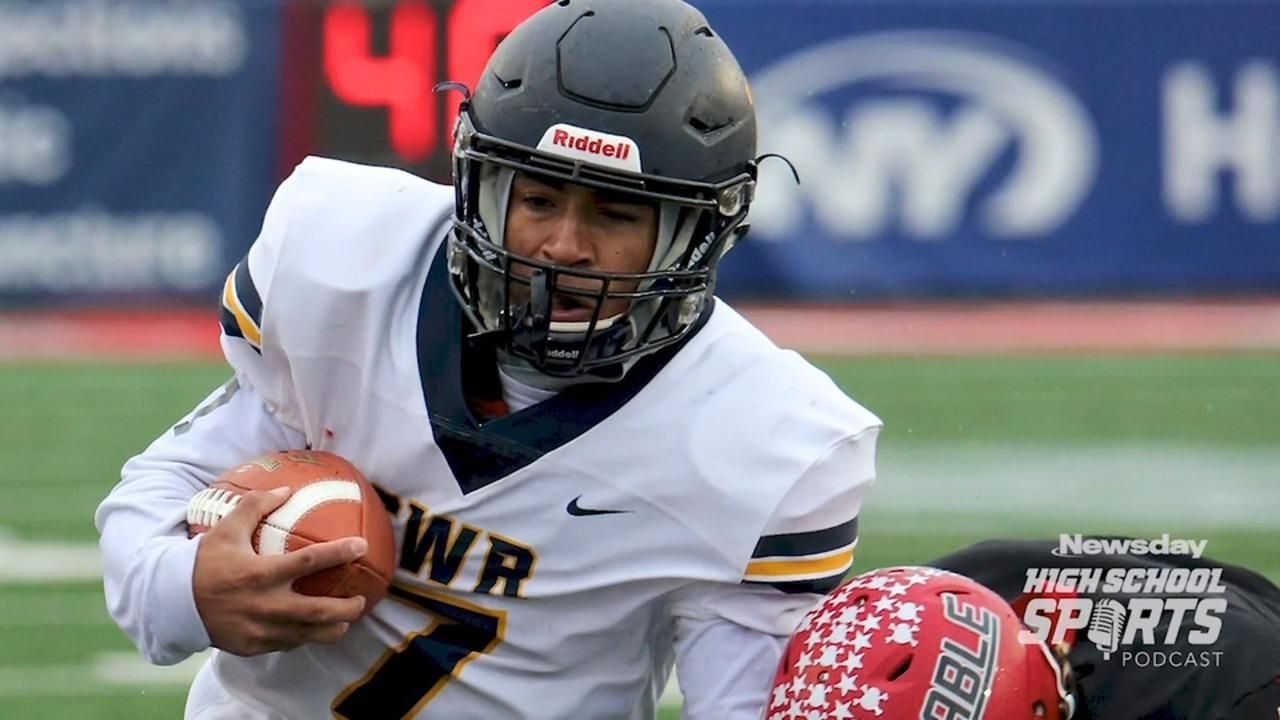 “He’s an amazing player,” Shoreham-Wading River coach Aden Smith said. “He led us to the championship. He’s the best player in the county.”

Shoreham-Wading River opened the scoring when Mike Casazza turned a short pass into a 47-yard touchdown on the opening drive. Mount Sinai (10-1) responded with an 11-play, 72-yard march capped by Brandon Ventarola’s 2-yard touchdown run. That tied it at 7-7 with 3:47 left in the first quarter.

Arline took over from there. He rushed all seven times in a 61-yard drive, scoring on a 2-yard run for a short-lived 13-7 lead with 2:20 left in the half.

Thirteen seconds later, Mount Sinai’s Matt Lomonaco was standing in the end zone after a 90-yard kickoff return. The extra point gave the Mustangs a 14-13 lead.

The game completely flipped on an unsportsmanlike-conduct penalty assessed against Mount Sinai on the Mustangs’ first drive of the third quarter.

Leading 14-13, the Mustangs marched 61 yards to the Shoreham 17. Joe Spallina’s run on third-and-5 came up a half-yard short of the first down, setting up fourth and less than a yard for the first down.

But the 15-yard penalty for unsportsmanlike conduct turned a fourth-and-short call into a fourth-and-16. Ventarola rolled right and was sacked from behind by linebacker Jake Wilson for an 8-yard loss to the 39.

“The unsportsmanlike penalty changed the entire complexion of the game,” Mount Sinai coach Vinnie Ammirato said. “We were driving for another score, with the lead, and that killed all of our momentum.”

Arline promptly engineered a seven-play, 61-yard scoring drive capped by his 38-yard touchdown run behind a huge block from Robert McGee. McGee’s two-point conversion run made it 21-14 with 4:10 left in the third quarter.

“He’s a beast out in front of me,” Arline said. “And our line never disappoints, they always come to play. It was hard to throw today, so it was about the blocking and the run game.”

On the next Mount Sinai possession, the Mustangs had a fourth-and-1 at their 25. Ventarola was stuffed at the line by a horde of Wildcats for no gain.

Arline made Mount Sinai pay for the gamble. He followed blocks from Wilson, McGee and Casazza around right end for a 25-yard score and a 28-14 lead with 1:20 left in the third quarter.

“We just get him in space and let him do his thing,” Smith said. “He’s so gifted and has such great vision.”

The Shoreham defense came up big again as Dylan Blanco came off the left edge and chased halfback Ryan Jones into the end zone, where a fumbled pitch rolled loose. Jones slid past the ball on the slick turf and Blanco pounced on it for a touchdown and a 35-14 lead with 20 seconds left in the third quarter.

“I came from the outside and saw the pitch get away from the halfback,” said Blanco, who had 11 tackles. “And I dove on the ball. It was the happiest moment of my football life.”

He added, “We shut them down after the first drive of the game. We were pinching the ends and giving the backs nowhere to run. What a great win.”