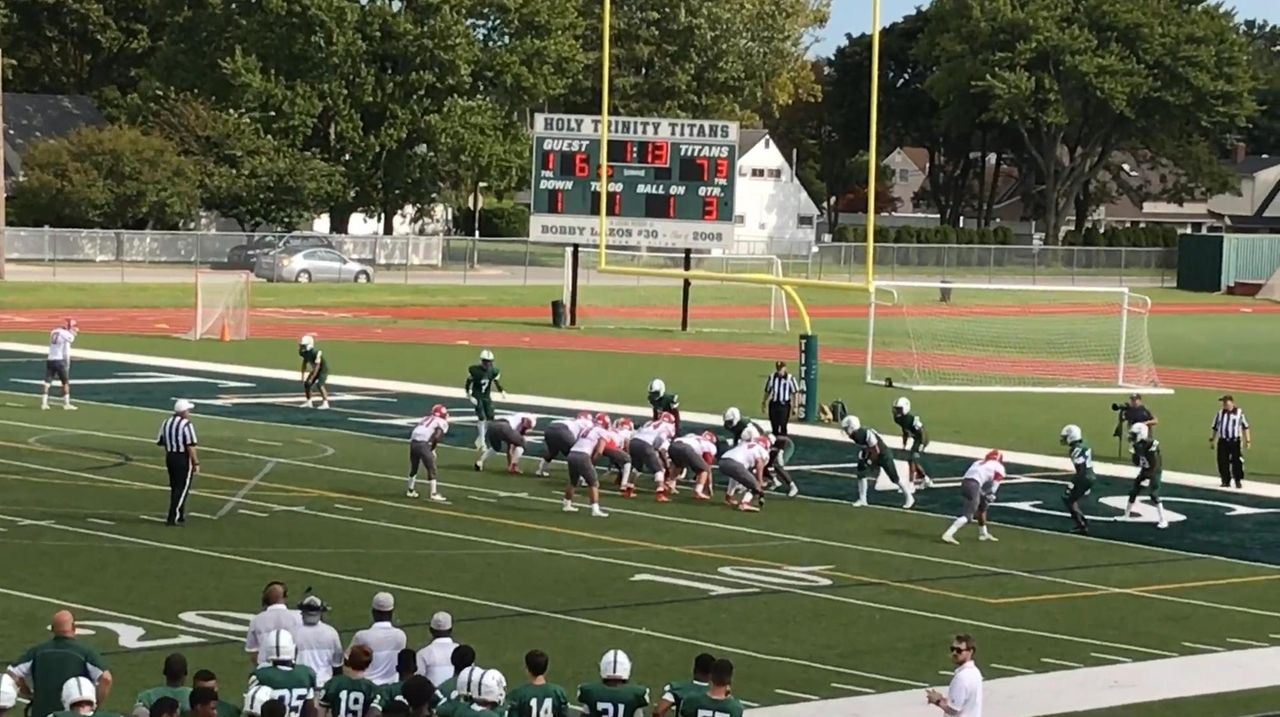 Christian Maisel was beaming alongside his teammates postgame. His energy was hard to contain, just like his play throughout the day.

Maisel finished with two touchdown receptions, three fumble recoveries and two forced fumbles as St. John the Baptist opened their season with a 22-7 road victory over Holy Trinity in a CHSFL Class AA-II on Saturday afternoon.

“We were not losing that game,” said Maisel, a wide receiver and strong safety who also had 80 rushing yards on five carries. “After being down at half coach said new beginnings. We came out bigger than they did in the second half.”

Maisel’s biggest offensive play of the day came with 7:33 left in the game. He caught a short pass from quarterback Kyle Chase, eluded multiple defenders and burst down the sideline for a 41-yard touchdown. Running back Jayden Louis, who had 82 yards on 17 carries, ran in the two-point conversion to cap the scoring for the Cougars.

“I knew I was scoring right when coach [Phillip] Alba called the play,” Maisel said. “There was no doubt about it.”

St. John the Baptist opened the scoring with 2:38 remaining in the first quarter on 4th-and-goal from the 10-yard line. Starting quarterback Nicholas Mazziotti scrambled to his left after a wide snap and, under pressure, found a well-covered Maisel just across the goal line for the TD. The Cougars led 6-0 after a failed extra point attempt.

“I know Maisel can make the play,” Mazziotti said. “I just knew I had to get it out of my hands and give him a chance.”

Holy Trinity responded with 5:39 to go in the half on a 3-yard rushing touchdown by Kameron Robbins. Jaden Sinclair set up the scoring drive by returning a punt 17 yards to St. John the Baptist's 28-yard line. The Titans led 7-6 at halftime before the Cougars put their sluggish start behind them.

“We always talk about overcoming adversity in a football game,” Alba said. “You’re always going to have it. I reminded the players at halftime that we had some. But to have that resolve to overcome that was big.”

Maisel had a big impact on the defensive side of the ball. He made an eye-opening play early in the third, stripping the ball from a Holy Trinity running back in the middle of a moving pile for his second forced fumble and recovery.

With 3:11 remaining in the third at Holy Trinity's 29, Maisel came up with his third fumble recovery, which set up the go-ahead score two minutes later. Chase, who was in the game after Mazziotti was injured, sneaked into the end zone from the 1-yard line. Matthew DePaola ran in for the two-point conversion to give St. John the Baptist a 14-7 advantage.

“Christian was invaluable on the defensive side,” Alba said. “He’s a gifted player offensively too . . . When we needed a first down or a touchdown, we knew who to get the ball to.”

The Cougars couldn't help but get a lift from Maisel's energy on both sides of the ball.

“It doesn’t get much better than that,” Mazziotti said.