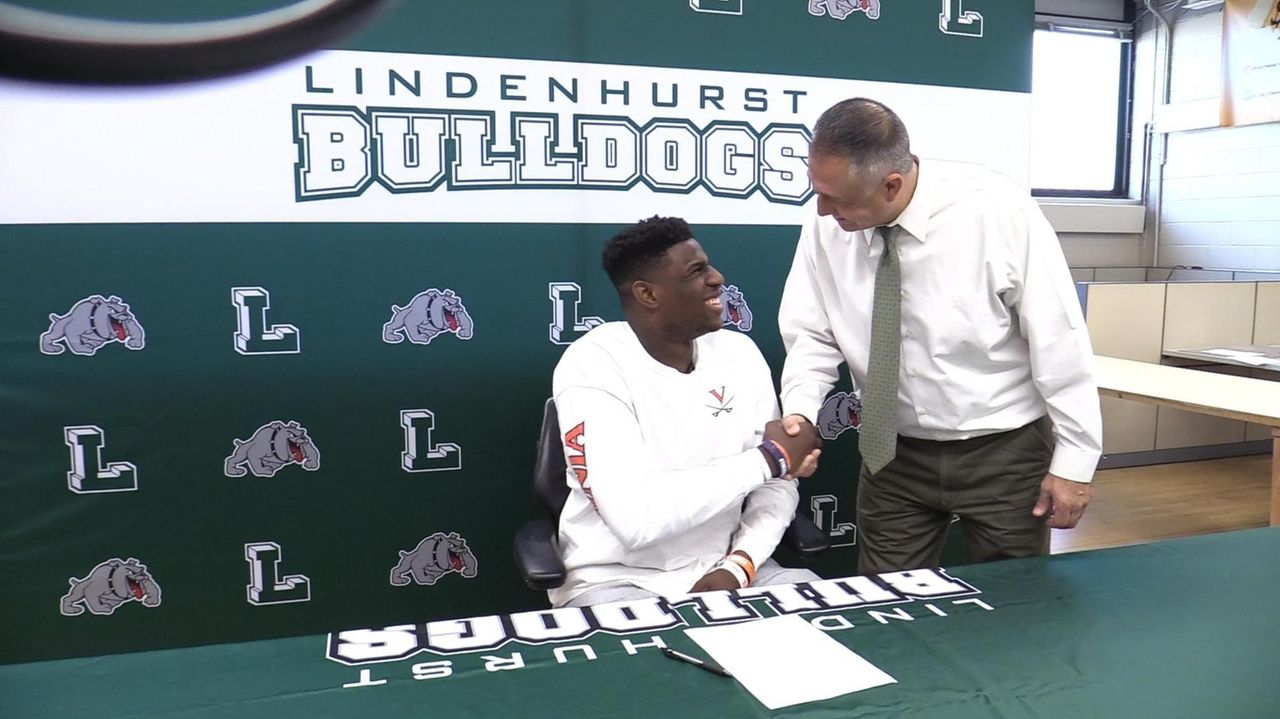 Sunkonmi Agunloye, who led Lindenhurst to the Long Island Class II championship, signed his letter of intent on Thursday to play football at the University of Virginia. Credit: Heather Walsh

The football coaches at the University of Virginia are betting opponents can’t run around Su.

Sunkonmi Agunloye, a 6-6, 252-pound two-way star for Lindenhurst, accepted a full scholarship to play football for the Cavaliers on Wednesday, the first day of the early signing period for the Class of 2019-2020.

“He had a really tough decision with all the great schools that were interested in him,” Lindenhurst coach Nick Lombardo said. “He flew out west and made an official visit at UCLA and thought that was his school because he loved it. He’d visited Rutgers, and Rutgers coach Greg Schiano took a helicopter to Long Island to recruit him. And this weekend Su visited Virginia, and the campus and coaches just blew him away.”

Agunloye, who led Lindenhurst to the Long Island Class II championship, had offers from more than a few FBS schools, including UCLA, Navy, Rutgers, Virginia, Pittsburgh and Syracuse. But Agunloye, an excellent student, also was considering his options with the many Ivy League schools that expressed an interest.

Agunloye, recruited as a defensive lineman, narrowed the field to three schools by Tuesday before choosing Virginia over UCLA and Rutgers. Virginia had an excellent season before losing to Clemson in the ACC championship game. Virginia was selected for a New Year’s Six bowl game and will play Florida in the Orange Bowl on Dec. 30.

“I wanted my choice to be a surprise,” Agunloye said. “I loved UCLA and Virginia. I could see myself studying and playing football at both schools. Beautiful campuses, sunny and warm. Very little set them apart. UCLA was amazing. It was my first time on the West Coast in Los Angeles. And Virginia, such a historical place, felt like the perfect fit.”

Virginia is getting an outstanding student-athlete. Agunloye, who won’t turn 18 until May 29, will study economics with a concentration in finance.

He said his decision came down to distance and love for family.

“I wanted to be near my parents, my family,” he said. “I’m an hour-and-a-half plane ride away and they won’t have to stress to visit or see my games. That’s a big part of my decision.”

The close-knit family bond built by Agunloye’s parents, Michael and Christianah, contributed to his decision. They emigrated from Nigeria in 1985 and had three daughters: Jemibayo, who works in the fashion industry in Manhattan; Funmilayo, a doctor at the University at Albany, and Banke, a senior at Cornell.

“My sisters are such great models and drive me to be successful,” Agunloye said. “I want to meet that standard my older siblings have set — it’s a great motivator.”

Agunloye was brought to the varsity as a 14-year-old freshman. The three-year starter played for two Long Island championship teams. He had 86 tackles, seven sacks, one forced fumble, three fumble recoveries and four blocked kicks this season.

Agunloye’s blocked extra point was the key play in Lindenhurst’s 14-13 win over Garden City in the Long Island Championships.

“He’s a physical specimen with raw ability that can really run to the football,” Lombardo said. “Just wait until the Virginia staff gets him into the weight room. He has great length and a long wingspan that’s tough to get around.”

Lombardo added, laughing: “We struggled with the pronunciation of his given name, so we nicknamed him Su. He is loved by everyone. A total team player and an absolute stud.”

“It’s been an amazing last four years at Lindenhurst,” Agunloye said. “And our community was so supportive with packed-out stands at home games. I’m ready for Virginia.”