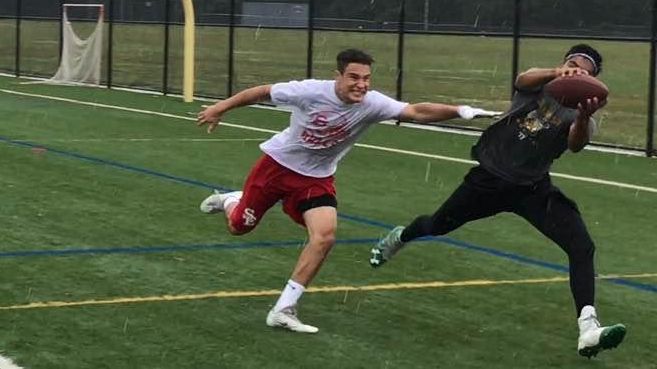 The Patriots entered last season with their highest preseason ranking in program history, No. 3, coach Chris Boltrek said, and proved worthy of their seed on the field. Ward Melville advanced to its first county final in 29 years before losing, 28-21, to Floyd.

“We look at last season and we say we made it there, but now we want to take it to the next step,” senior running back and defensive back Nick Messina said. “We want to win and then we want to go to the Long Island Championship and win and we’re going to do everything we can to do that.”

Despite graduating their starting quarterback, Wesley Manning, and a strong core of skill players like John Corpac, Eddie Munoz and Andrew McKenna, Ward Melville returnees include Stephen Torrico, who led the team in sacks last season at defensive line and is expected to convert to linebacker this season. The Patriots enter this year ranked No. 5 in Suffolk I.

“There’s a lot more expectations from us now to continue our upward trend of being a great football team,” Torrico said. “Everyone’s stepping up right now, they’re committed and showing off what we got.”

One of the Patriots’ strengths this season will be the offensive and defensive lines, led by twin brothers Thomas and Tim Kutchma along with Jimmy Small.

“At the end of the day, I think it begins and ends in our line,” Boltrek said. “I feel confident in our offensive and defensive line this year, it’s one of our major strengths, as well as some of those skill players we are bringing back.”

Ward Melville finished last season 6-5, rebounding from a three-game losing streak in the middle of the season to win its final four games, including two playoff victories. Ward Melville defeated Connetquot, 14-0, in the first round and handed top-seeded Lindenhurst its lone loss of the year, 27-10, to advance to the Suffolk I championship game.

“Going to the championship was amazing and the group of kids we had is special,” Messina said. “We lost a lot of our good wide receivers and we lost our QB but the kids that are stepping in their place are really stepping up and getting ready to take the spots that were left.”

Messina, who had a 74-yard touchdown run in the county championship game, will continue to be a featured part of the Patriots’ offense throughout the season and Boltrek complimented his playmaking ability.

“I’m really looking forward to watching Nick Messina out there,” Boltrek said. “I think he’s one of the best athletes in the county and any chance you get a kid like that on the team, it can certainly be electrifying.”

Boltrek, who pushes for multi-sports athletes, has confidence in the returning players this season to continue the upward football trend at Ward Melville.

“I think the kids coming back this year have a chip on their shoulder that they feel they have to prove that it wasn’t just those kids last year that kind of took us there and that they took us there as well,” he said. “So I think that’s a major motivator for them.”