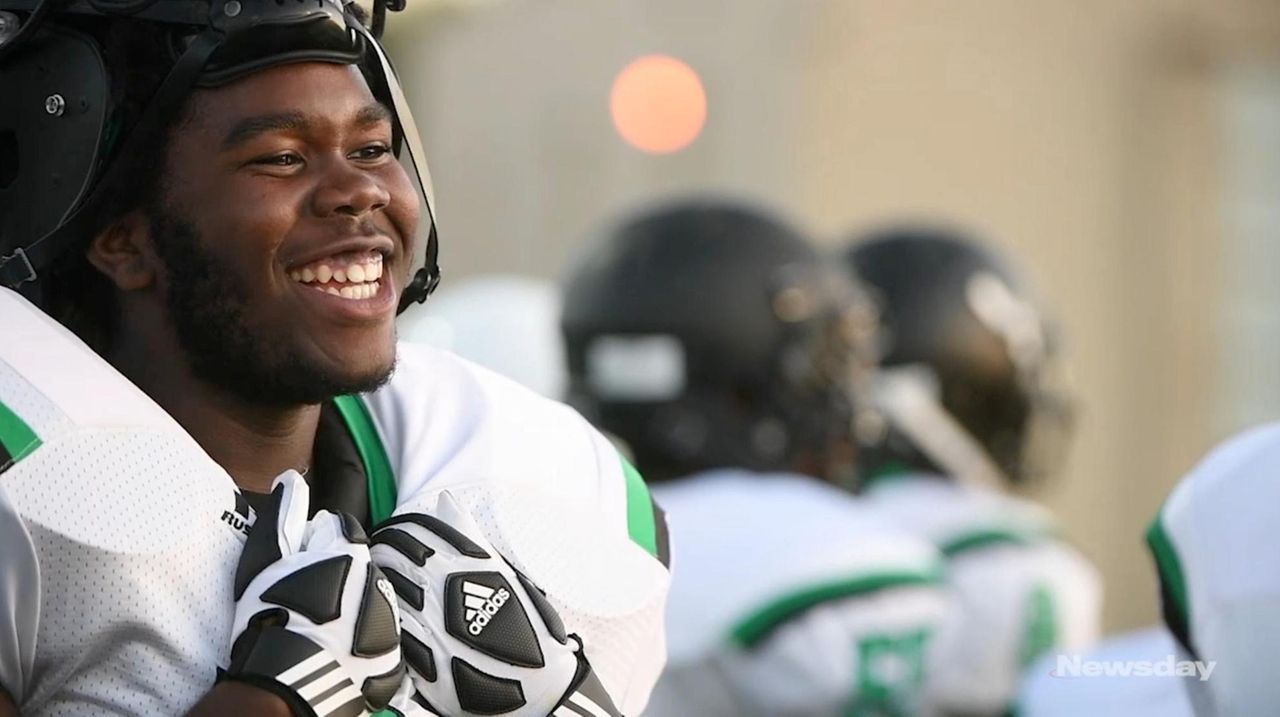 The Wyandanch football team played their first game of 2019 after $350,000 of donations were raised to save their season. Wyandanch defeated Greenport-Southold, 54-12, on Friday, September 13, 2019.  Credit: Newsday / Steve Pfost

Rashaun Malloy in his pregame stretch said, “Oh man, it feels so good to play football again. I’m so grateful for the people who made it possible for us to have this season.”

Wyandanch teammate Jadan McNaughton leaned over and high-fived his teammate and echoed the same sentiment as the two senior captains got ready for Friday night’s game in Greenport.

The Warriors traveled an hour and 45 minutes by school bus and covered 71 miles to play in a Suffolk Division IV season opener that would not have materialized had the district not found donors to raise $350,000 for the school’s sports programs.

Malloy made the most of his opportunity, scoring three first quarter touchdowns as Wyandanch rolled to a 54-12 win over Greenport-Southold on a beautiful evening on the North Fork’s east end.

“It’s going to be a great ride all the way home,” Malloy said. “We really didn’t know what to expect because we had a late start and things weren’t coming together quick enough. And we still have plenty of work to do but I’m happy with the effort from our guys and the way we pulled it together.”

Wyandanch was forced to raise $350,000 to pay for the school’s sports teams after all after-school programs were cut from the $69 million contingency budget plan adopted in June.

The New York Jets donated $25,000 to the football team. The Suffolk County Police Department gave $150,000 as part of a state grant intended to help fight gangs. The remaining funds came from local companies and individual donors.

“We had a bye last week and that gave us a little more time to get our guys on the same page,” said Wyandanch coach Josh Shields. “There were some really good things out here and some that need a lot of work. We didn’t have any real expectations. But our players and coaches are going to make the most of a great opportunity to have a football season.”

Malloy set up his first touchdown when he stripped Greenport quarterback Nick DeNicola on a fourth down run at the Wyandanch 19. Malloy returned the ball 61 yards to the Greenport 20 to set up his 4-yard scoring run with 5:17 left in the first quarter.

It took just 15 seconds for Wyandanch to add to its lead. Junior Turrell Simmons recovered the ensuing kickoff at the Porters’ 31 and the Warriors scored on the next play. Malloy went up the middle and cut back to the outside behind a big block from McNaughton and raced 31 yards for the touchdown and a 14-0 lead.

Greenport (0-2) scored just before the half ended when sophomore defensive tackle Hunter Anderson recovered a fumble at the Warriors’ 17. On second-and-goal, DeNicola fired a 7-yard touchdown strike to freshman Jay Tramontana to get within 22-6 with 5:02 left.

Wyandanch responded on the very next play when Malloy ripped off a 79-yard touchdown run for the 30-6 halftime lead.

“This was really important for the seniors,” said McNaughton, who had a fumble recovery and five tackles. “It’s one last ride for us.”