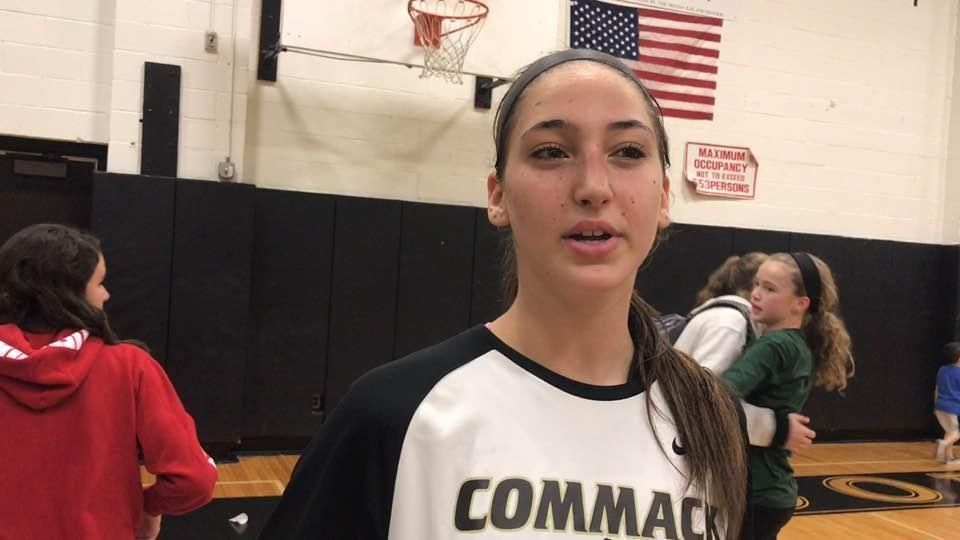 Amanda McMahon spoke about how the Commack girls basketball team responded from a rough first quarter in its 52-33 win over Sachem East in the Suffolk Class AA quarterfinals at Commack on Tuesday, Feb. 20, 2018. (Credit: Newsday / Kenny DeJohn)

The Commack girls basketball team didn’t let an ominous start to the first quarter linger. Instead, the Cougars ramped up the pressure and took over a game that initially had the makings of an upset.

Sachem East jumped out to an eight-point lead and then led by five at the end of the quarter, but Commack responded.

Amanda McMahon scored 15 points, Casey Hearns had 11 and Katie Kelly scored all 11 of her points in the second half, propelling the top-seeded Cougars to a 52-33 win over No. 8 Sachem East Tuesday night at Commack in a Suffolk Class AA quarterfinal.

The Cougars advance to the semifinals Saturday at SCCC-Selden against No. 12 Ward Melville.

“I don’t think we played the best we could’ve played in the first quarter, and I think that was obvious with how different the rest of the game was,” said Hearns, a senior who said she hasn’t lost a home game since 2013. “I think when we turned it on, it was a total game shift.”

Sachem East (11-10) managed only 12 second-half points, while Commack used a 13-0 run in the fourth quarter to blow open the game. Lauren Maline’s free throws with 4:41 left in the third quarter gave Commack the lead for good at 23-21.

Danielle Cosgrove, a senior bound for Notre Dame, scored 20 points for Sachem East, 11 of which came in the first quarter. Maline, Hearns and Sydney Rosenoff effectively denied her the ball in the paint for much of the second half, disrupting the offensive flow.

“The second half we just took it away,” Kelly said.

The turnaround began at the end of the first quarter when Hearns made a transition layup, making the score 14-9. McMahon converted a three-point play for the first points of the second quarter and then made a driving layup on the next possession, tying the score at 14.

The sides entered the break tied at 21.

Coaches Denis Conroy and Russ Tietjen opted to press more after the sluggish start, allowing Commack (21-1) to use its speed. Conroy said he didn’t want to press from the beginning but knew it was the right decision later on.

“To a degree, you want to make the other team prove they can hurt you before you start going to the reserve,” he said. “You don’t want to press early and have it not work, and then, now what?”

“In the first quarter, we came out a little slow as we always do,” she said. “We took a little step back, but with switching defense from man to a zone, we just keep the intensity going and we get a lot of steals. That’s our game.”