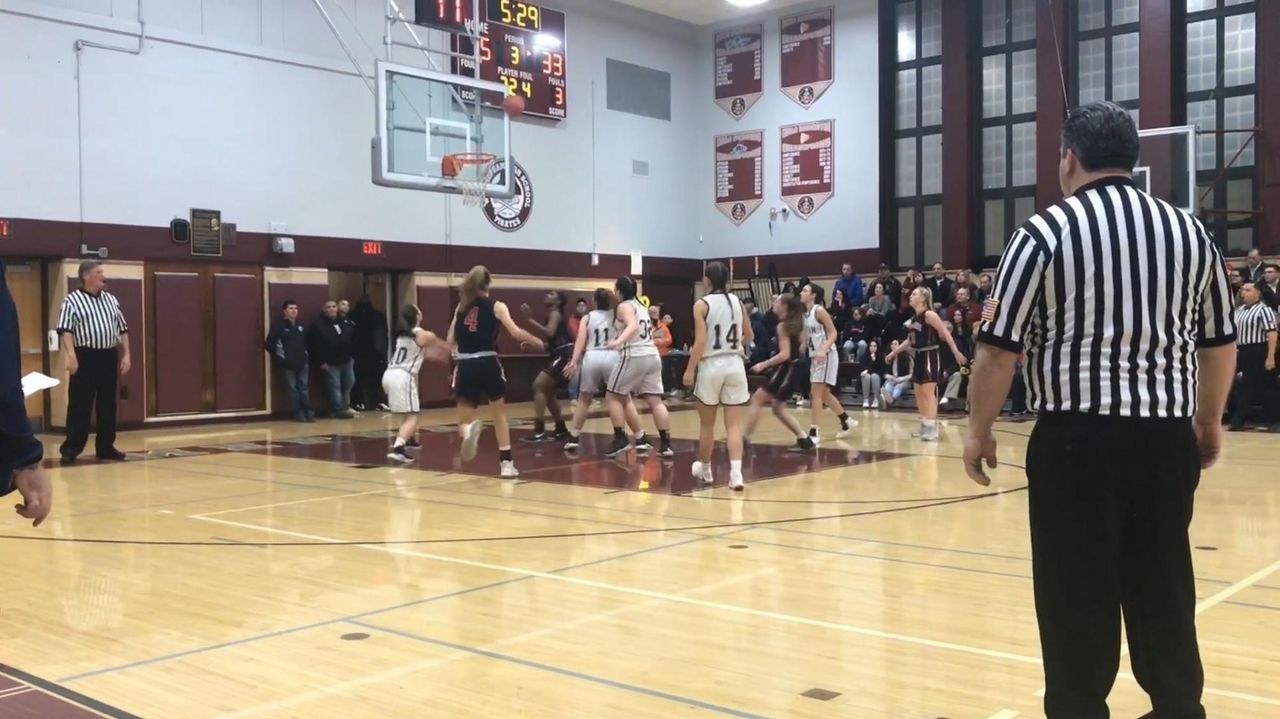 South Side sophomore guard Bridget Basile discusses the ninth-seeded Cylones’ 52-37 victory over No. 8 Mepham in the second round of the Nassau A playoffs on Thursday, February 20, 2020. Credit: Newsday / Laura Amato

The South Side girls basketball team flipped the script on Thursday night.

It wasn’t how the ninth-seeded Cyclones finished, it was how they started, topping No. 8 Mepham 52-37 in the second round of the Nassau A playoffs after holding the Pirates to zero first-quarter points.

“We were saying before the game started that we wanted to win every quarter,” said senior guard Katie McMahon, who finished with 10 points. “We were trying to come out with high energy.”

With both teams struggling to find their offensive footing in the opening minutes, McMahon credited South Side’s defense for helping the Cyclones find a rhythm. The squad forced a handful of early turnovers, setting a quick tempo, before Sydney Rathjen scored the game’s first point with 5:17 left in the quarter when she went 1-of-2 from the line.

“We were playing good defense from the start and we really wanted to cause turnovers,” McMahon said. “That helped us, and we started getting our shots.”

South Side (15-5) scored 11 points in the final 3:43 of the first, highlighted by sophomore guard Bridget Basile who came off the bench hit back-to-back buckets. The run was enough to spark the Cyclones’ confidence and give them some breathing room for the rest of the game.

“Our main thing is we want to get the ball moving and work as a team,” said Basile, who led all scorers with 13 points. “We did it really well this game.”

South Side coach Dan Ferrick echoed the team-oriented mindset, adding: “Everyone played, everyone participated and that’s kind of the way we are. We don’t have a girl who’s going to score 40. This is what we have, and we use it.”

Mepham (14-6) did its best to rally in the second half, making it a 10-point game on Ali Heller’s free throw with 2:09 left, but the Cyclones didn’t flinch.

South Side answered each one of the Pirates’ pushes with one of its own and wrapped up the victory as McMahon and Basile combined to go 5-of-6 from the line in the final 44 seconds.

“We knew [Mepham] was going to go on a run, but it was all about how you handled the run,” Ferrick said. “They were resilient, and they never got upset.”

The Cyclones will take on top-seeded Floral Park in the quarterfinal on Tuesday, looking for another strong start and lockdown defensive effort.

“This was a big win,” McMahon said. “Now we’re trying to go to counties, so we want to keep winning and improving.”