The Commack girls basketball team’s experience Tuesday night in the Suffolk Class AA final at Farmingdale State was one of second chances.

The Cougars had the opportunity to avenge last season’s loss in the final, and senior Lauren Maline made it possible by corralling missed shots and giving her team second chances. Sometimes third chances.

Her relentless performance on the glass helped No. 1 Commack make nine three-pointers en route to a 52-25 win over No. 2 Half Hollow Hills East, securing the program’s third county title in four years.

Commack (22-1) awaits the winner of the Nassau Class AA final between Baldwin and Massapequa in the Long Island championship/Southeast Regional semifinal on March 8. 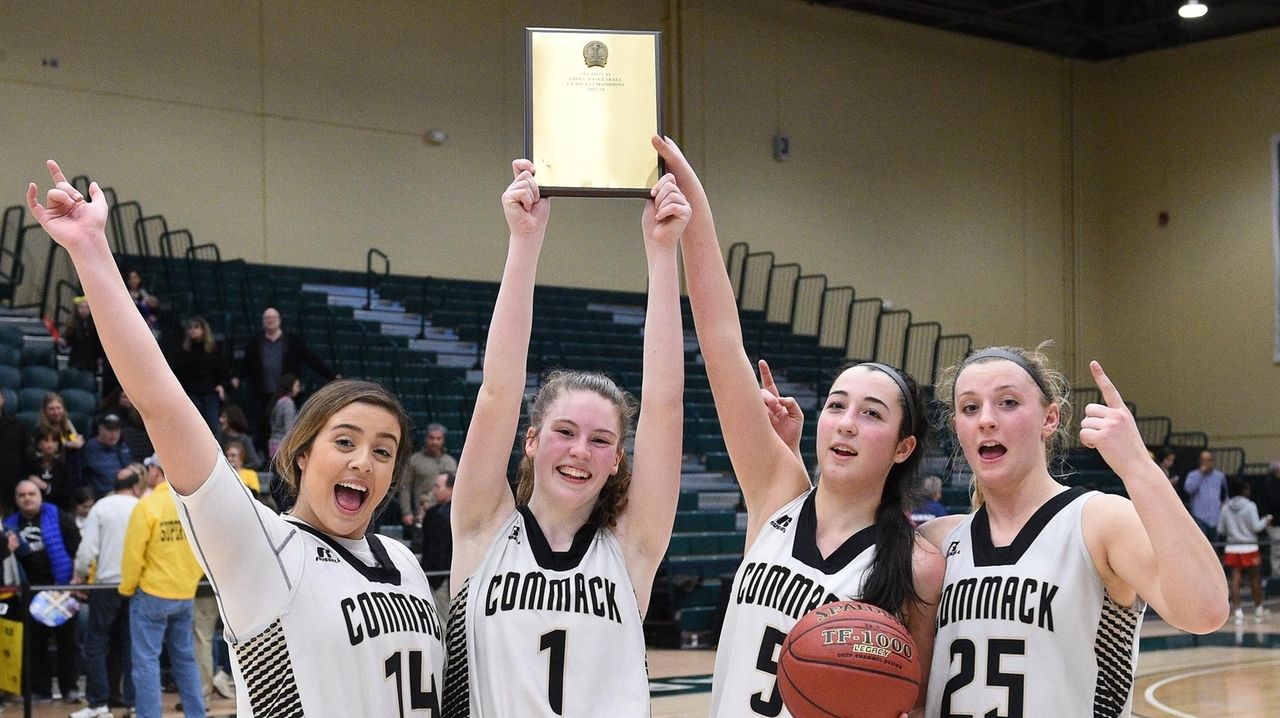 “If she wants a rebound, she’s going to go get it,” coach Russ Tiet jen said of Maline, who contributed just two points but left her mark on the game with 18 rebounds. “She might not get them all, but she’s not going to be denied. If somebody is in her way, she’ll find a way around them. Sometimes, she goes through them.”

Kim Shalhoub had 15 points (four three-pointers), Katie Kelly had 13 points (two), Amanda McMahon had 11 points (one) and Casey Hearns had eight points (two). Hearns hit a buzzer-beating three-pointer off the glass at the end of the first quarter, pushing the advantage to 21-8.

Maline attempted one three-pointer herself with the shot clock expiring in the third quarter, but it missed long. She sprinted from the perimeter, grabbed the rebound and kicked it out for another possession.

Her energizing play sparked Commack during its 16-0 run at the end of the third quarter after Hills East (21-3) cut the deficit to 28-21 on a layup by Jessie Maurer.

“Honestly, I just feed off the energy I get from my teammates,” Maline said. “I play for them. I rebound their shots so that I can get it back to them. It’s all about giving everyone else opportunities to better the team’s chances.”

Commack’s defense prevented Hills East from getting into an offensive flow in its first final appearance in program history. Alexa Wallace, a dynamic slasher and playmaker, was limited to nine points.

“I was here since freshman year,” Shalhoub said. “We had the two county championships in a row, and last year we lost in a close one, but it feels good to be back.”

Maline, who was also on the team as a freshman, said Commack’s on-court chemistry was the difference.

“When I get to pass to them and watch them sink a three,” she said. “I feel like I got to sink a three.”

Girls basketball past championsCounty, LI and state champs since 1975.