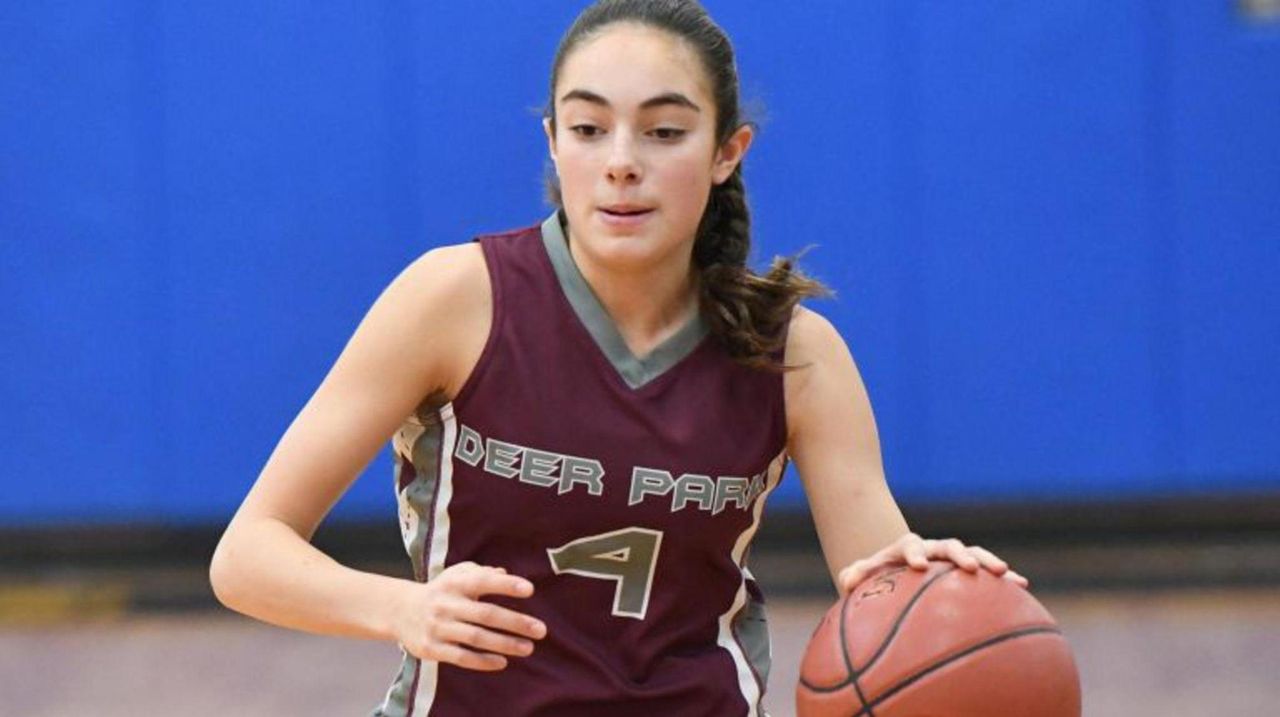 Deer Park's Julianna Knice discussed Kylie Kuhn's go-ahead three-pointer with 53 seconds remaining in the third quarter, and what the team will be doing to build off a 35-26 victory over Harborfields in the Suffolk Shootout Tournament played at Northport High School on Thursday. Credit: Newsday / Melissa Kramer

Deer Park's Kylie Kuhn was battling two opponents Thursday: Harborfields and a troublesome head cold. In the end, neither was able to stop her.

Although the cold hampered the freshman guard's play, she rose above it when the Falcons needed her most.

With 53 seconds left, Kuhn took a pass from Ariel McDermott and knocked down a three-pointer from the right of the key to break a tie at 26  and begin a 9-0 run by Deer Park in a 35-26 non-league girls basketball victory in the Suffolk Shootout Tournament in Northport.

Kuhn has been a big contributor to Deer Park's offense, averaging  a team-high 15 points coming in.

“She’s one of the most competitive players," Falcons coach Mike Gennaro said. "She really struggled with her shot early on [in this game]. We knew she was under the weather and battling through it.”

Kuhn saved her best for last.

After nailing the big three, she made her fifth steal at half court and was fouled on her way to the basket. She made 1 of 2 free throws to expand the lead to 30-26.

Senior Julianna Knice led Deer Park with 12 points and Kuhn finished with nine. Knice was 5-for-6 from the line in the final 30 seconds to seal the win.

Knice had nothing but praise for Kuhn, even on a night in which she struggled early.

"We drove to the basket and kicked the ball out to her," Knice said of Kuhn’s go-ahead three-pointer. “[She] may be the team’s youngest player, but that does not make a difference. We expect her to do her thing and that’s score a lot of points.”

Deer Park (4-1) was locked in a tight defensive battle from the get-go and trailed 7-6 after the first quarter and 13-12 at the half.

Harborfields (2-4) led 21-18 after three quarters with help from two late three-pointers by guard Celia Argiriou. The Tornadoes were up 26-24 when Falcons forward Cassie Hovanec hit a driving layup with 1:03 left to tie it.

“It was intense on both sides," Knice said.