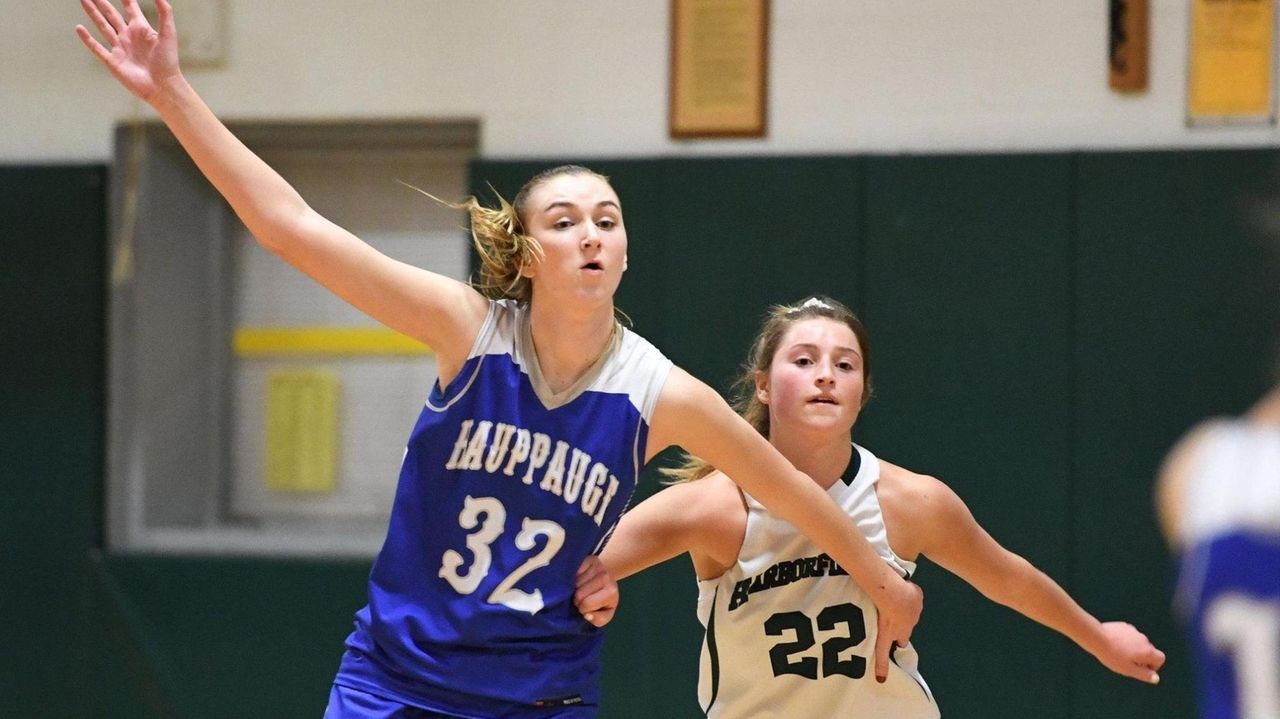 Lauren Romito had 11 points, 12 rebounds and 11 blocks and spoke of the team’s strategy in Hauppauge’s 48-30 win over host Harborfields in a Suffolk League IV girls basketball game on Thursday. Credit: Newsday / Kenny DeJohn

Everything revolves around Lauren Romito for the Hauppauge girls basketball team.

On defense, she’s the key to the Eagles’ lockdown approach. On offense, she’ll either beat you inside or kick it out to an open shooter. As a 6-3 forward with length, Romito knows her role and plays it effectively.

The senior had 11 points, 12 rebounds and 11 blocked shots in a 48-30 win over host Harborfields in Suffolk League IV on Thursday. Her defensive pressure kept the Tornadoes off balance and she scored eight points in the second half.

“I know that when you perform on defense, you can always bring it on offense afterwards,” said Romito, who had five blocks in the first quarter. “It’s important to hold teams to a minimum of points. Even though I might not be getting shots, I’m trying to look for my teammates so they can knock down some threes.”

Defending Suffolk Class A champion Hauppauge loves to shoot from beyond the arc. Jamie Devine had 20 points and hit four of her team’s seven three-pointers. Kayla Bullard (two) and Giuliana Abruscato had the others.

“When they collapse on Lauren, it just opens up everybody,” coach Jamie Edson said. “We have shooters. We talk about it all the time. I don’t want them shooting 12-, 15-footers. I’d rather have them shoot threes. Mathematically, it’s a higher-percentage shot.”

Hauppauge led 32-16 midway through the third quarter before Harborfields (0-4) narrowed the gap with a 6-0 run, punctuated by consecutive lay-ins by Hallie Simkins. Bullard’s three-pointer made it 35-22, but Harborfields freshman Marina Bergin’s acrobatic three-point play cut Hauppauge’s lead to 35-25 entering the fourth quarter.

With Harborfields surging, Hauppauge (3-2) leaned on its defense. Maddy Torres, Romito and Devine opened the fourth quarter with easy baskets made possible by defensive stops, and Hauppauge cruised from there with a 41-25 lead.

Devine agreed that the defensive game plan is made simpler with Romito down low.

“Usually we leave her in the middle and we man-mark their shooters,” the sophomore said. “When they take it in, she gets the rebounds and we hustle down so we’re open on the outside.”

Romito doesn’t mind deferring to her teammates beyond the arc.

“Blocking shots always makes me happy, but it’s very frustrating when teams double you down,” she said. “It’s very common for a lot of people to sink in. But if my teammates are making threes, that’s all that matters. As long as we win.”