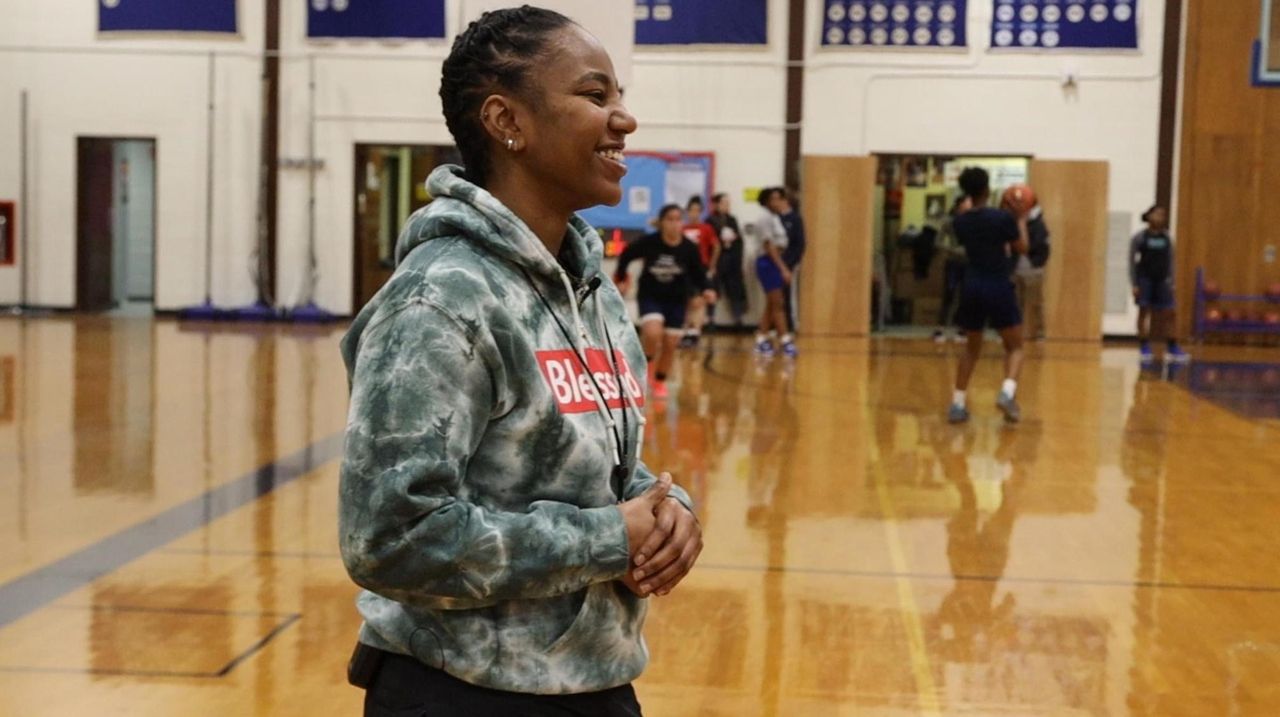 Kia Wright starred at Copiague High School for five seasons and in 2003 became just the eighth girl in Long Island history to eclipse the 2,000-point mark (she finished with 2,148, tied for 17th in Long Island history). She later starred for St. John's from 2004 to 2008 and now works as an assistant coach at her high school alma mater. Credit: Pablo Garcia Corradi

Kia Wright walks by the other version of herself every time she goes to work.

It’s right there in the photos inside the Copiague High School trophy case: Wright, the phenom who looked destined for the WNBA, playing for St. John’s and going up for a layup, or shooting over a defender who looks about half a foot taller than she is.

That last one came three days before WNBA free-agent camp, ending her career at 27 and turning a deferred dream into an unreachable one.

It can be easy for darkness to take over after that, Wright said as she kept a watchful eye on the Copiague junior varsity girls basketball team she now coaches. It did for her, and for a moment there, the athlete so focused and so intense that she was nicknamed “Quiet Storm” lost her bearings.

“It was difficult, you know, and I fell into a depression,” said Wright, now 34. “It was a relationship that I had built since I was 7 years old, a 20-year relationship that I had a hard time letting go. It was hard to deal with, coming to terms with my career. I was good enough to play in the WNBA and professionally, but my body just didn’t agree. It took me some time to get over.”

Though life didn’t turn out as she thought it would, Wright’s current path is consistent with the athlete and the person she was in high school and college. The girl in the trophy case always wanted to give back to the community that helped raise her. She volunteers to help adults with disabilities and is studying to become a certified central sterile practitioner, a medical care worker responsible for decontaminating patient materials, integral to stopping the spread of illness.

Wright, after all, still is the woman who chose Copiague over Christ the King and its prestigious girls basketball program because she wanted to have fun and be part of the district she lived in. She signed a national letter of intent to play for Connecticut but transferred to St. John’s during the summer before her freshman year because it was close to home.

The first decision gave Copiague girls basketball its first Long Island championship and earned her Newsday’s Charles H. Clark Award as the Suffolk girls basketball player of the year in 2002.

The second decision helped St. John’s get to the NCAA Tournament for the first time in 17 years and eventually led to her enshrinement in the school’s Hall of Fame. Wright is the only player in program history to amass 1,500 points and 400 assists.

Along the way, she made it to the USA Junior Olympics.

And this decision now, the one that means not only coming to terms with her past but embracing it, has made all the difference.

Wright has been coaching the Copiague junior varsity for three years. Along with Gabrielle Gibson — another former Copiague basketball player — she’s working to one day re-establish the school’s dominance. Both are the heir apparents to varsity coach Carole Olsen, a community legend in her own right who, after 37 years, is inching closer to retirement.

Wright is refereeing middle school games, too, and has been doing so for the last year after getting over some initial hesitance. Now she loves it.

“It [shows] her resilience,” said Olsen, who coached Wright. “And not only because of the physical injuries but also finding herself and figuring out what is it [she wanted to do] .  .  . Her exploration of herself and her growth has been amazing. She could make a big impact.”

And in many ways, Wright already has.

Though the JV team is small and still finding its footing, Wright and Gibson give it an immediate air of legitimacy. Many come in not knowing that their coach once thrust Copiague basketball into prominence — that it’s the same girl in the trophy case — but when they figure it out, they’re immediately impressed.

They’re even more impressed when they get to know her, said Arleni Rodriguez, a sophomore on the JV.

“She never judges you for the way you are and she always just tells you to keep going,” said Rodriguez, still breathless from running drills. “Her personality makes me feel like I want to keep coming back because she’s just someone that motivates you. I’m loving it right now.”

The trophies for these types of victories look different from the ones Wright once was used to getting. She radiates quiet warmth when she talks of her kids, but she grins widely when she talks about the gift they just gave her: a blanket that says “Coach Kia” with a huge basketball in the middle.

“I tried to hold back the tears,” Wright said. “I was emotional but I didn’t cry .  .  . We don’t always win every game and it’s been a rough few years here, but to see them still smile and say, ‘Hi, Coach’ [is special] .  .  . We lost last night, so for them to come here still smiling, and [it was my birthday] so they sang me ‘Happy Birthday,’ that was great to feel. You don’t always see it on paper, the wins and losses, but I come here and they’re still smiling and happy to see me.”

Not to say that this wasn’t a huge adjustment for Wright, who comes from a background of caring very much about wins and losses. Still, she’s managed, and is trying to marry the joy her team already possesses with the winning, competitive spirit that made her one of the best girls basketball players in Long Island history.

When she graduated from Copiague in 2003, she was second in Suffolk history with 2,143 points. She was the eighth girl in Long Island history to eclipse 2,000 points.

Olsen has loved what she’s seen in that regard. She describes Wright as a gentle presence who nonetheless demands respect. Olsen has taught more than 10,000 kids, by her estimate, and will leave a huge hole when she retires, but the coach said she knows Copiague basketball will be in good hands.

But before that, the one thing Olsen does want to see is a very different sort of retirement. She thinks Copiague should put Wright’s number in the rafters — an acknowledgment of everything she did for the program and likely for everything she’s about to do.

“She’s teaching them the game and she has an amazing amount of patience,” Olsen said. “On the court, she played the same way. You wouldn’t necessarily know that she was scoring 40 points .  .  . She was vocally quiet, but she quietly got everybody playing around her to an elevated place.”

And despite the ups and downs of her career, Wright appears right at home in that gym, conferring with girls just learning to play basketball and (quietly) helping to build a team.

Her adaptability shouldn’t be too much of a surprise, though. She always did have a quick first step.