McKayla Jones' two free throws -- "I get on the line, I take a breath, calm myself down" -- lifted Hills East. Credit: Peter Frutkoff

McKayla Jones had to move forward, and she had to do it quickly.

In the throes of a back-and-forth, fourth-quarter battle, Jones routinely found herself on the free-throw line with a chance to give the Half Hollow Hills East girls basketball team a little breathing room.

She just couldn’t convert. Until the last two.

Jones made both free throws with 2.6 seconds left, icing a hard-fought 50-45 win for Hills East over Whitman in Suffolk II. The guard had made 1 of 4 free throws in the previous 30 seconds.

“I get on the line, I take a breath, calm myself down and think in my head that I’m going to make it,” said Jones, who scored five of her eight points in the fourth quarter.

Up 39-29 at the start of the fourth quarter, Hills East (8-1) could never quite put Whitman (5-4) away. Dana McGowan (six points) nailed a three-pointer and Meghan Soulias (12) followed 20 seconds later with a layin from the left block, cutting Whitman’s deficit to 39-34.

Hills East went up 47-39 on two free throws by Sophia Tawil (16 points), but Soulias answered with a three-pointer from the top of the arc. Danielle Kleet’s free throw pulled Whitman within 47-43 with 13.5 seconds remaining.

Jones was fouled intentionally on Hills East’s inbound. She missed the first but made the second for a 48-43 lead. Whitman’s Kate Hoffman (five points) was fouled shooting a long two-pointer and made both free throws before Jones iced it seconds later.

“I don’t think anything fazes McKayla,” coach Adam Cirnigliaro said. “I told her, even after she missed, ‘I’m going to put you on the line every single time we have this spot.’ ” 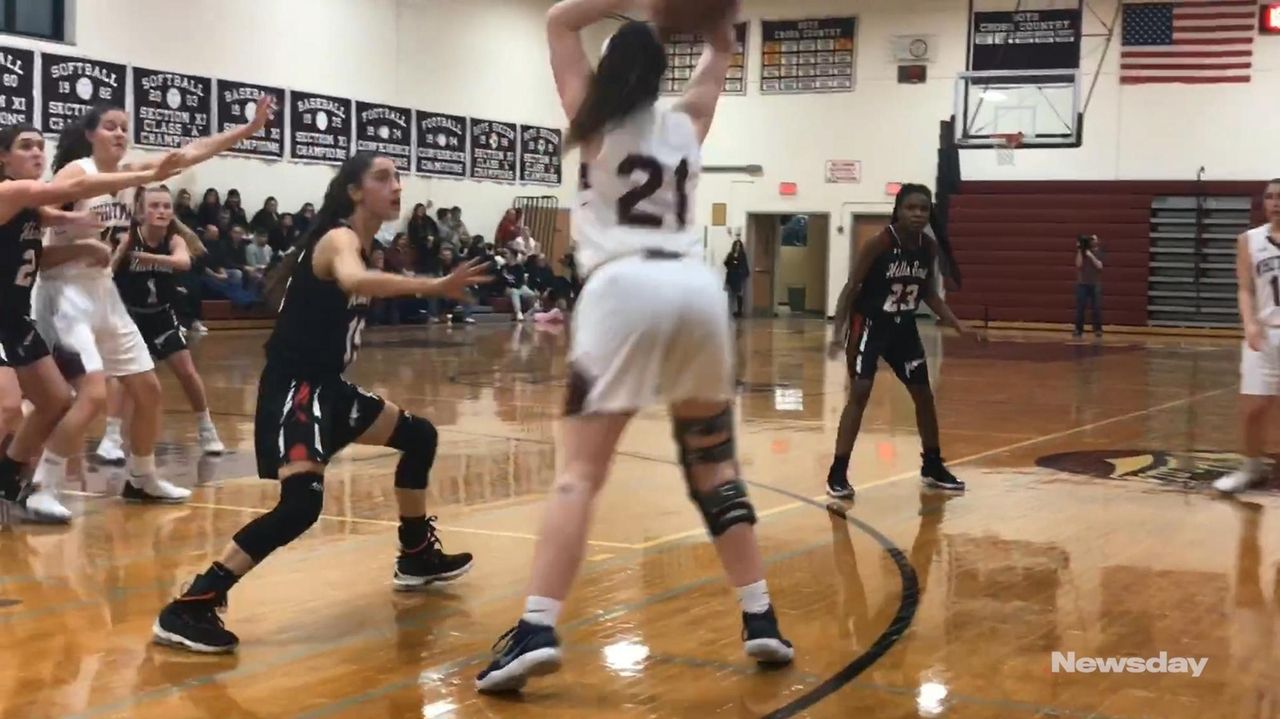 Jones and Tawil have been catalysts in Hills East’s ascent to the upper echelon of Suffolk II. Having graduated three key players from last year’s county runner-up, Tawil has been the one who assumed the bulk of the scoring.

Tawil scored nine of her 16 in the first quarter and overcame a lull in the second quarter to hit a big transition three-pointer from the left wing to close the third quarter.

“I would get really hard on myself because I wasn’t much of an offensive player before this year,” Tawil said. “But I ended up getting used to being that person and having that responsibility, and I learned to just chill out and stop making myself anxious about these things.”