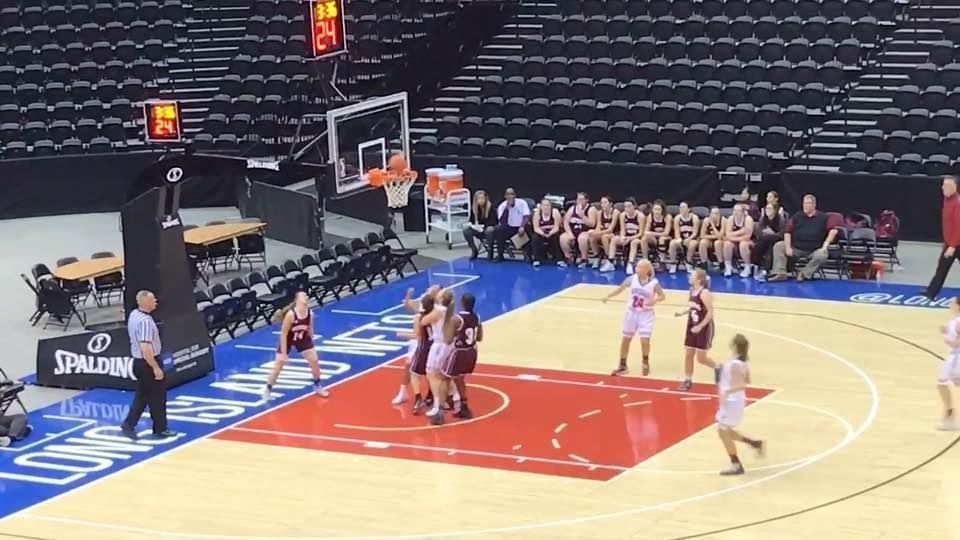 Highlights from Mepham win over MacArthur in girls basketball, 45-40, on Saturday, Dec. 23, 2017, at the Nassau Coliseum.

Julia Rawlinson has enjoyed watching her fair share of basketball at Nassau Coliseum.

Which explained the Mepham freshman’s uncontainable smile after her own quality display at that very venue on Saturday afternoon.

“After watching college games here, it was different to be playing on the court,” Rawlinson said. “It was a lot of fun.”

Sprinting up and down the home court of the Long Island Nets, Rawlinson notched 18 points and 12 rebounds in a 45-40 non-league victory over MacArthur.

The teams competed at the Coliseum as part of a fundraiser for their respective programs. Rawlinson noted the biggest difference in comparison to the high school courts she’s accustomed to playing on.

“Speed on the big court,” Rawlinson said. “Going to the inside because of the width helped me out.”

With Mepham leading 41-35 and just under three minutes remaining, MacArthur converted two consecutive layups in a 10-second span to cut the Pirates’ lead to two with 2:25 to go. Lorrie Dellacroce knocked down a baseline jumper 14 seconds later to give Mepham a 43-39 advantage.

Following a string of empty possessions, a Rawlinson layup with 22.6 seconds left put the Pirates ahead 45-40, sealing the win. Mepham improved to 5-2. MacArthur dropped to 4-3.

“She goes 100 percent the whole time,” Mepham coach Jim Mulvey said of Rawlinson. “She just gets it and goes. She buries her head, goes to the basket and says ‘Try to stop me.’ ”

MacArthur led 24-23 at the half thanks to an offensive rebound and layup by Zoey Quinn in the final two seconds of the second quarter. A floater by MacArthur’s Marissa D’Angelo at the 3:04 mark capped off a 7-0 run that put the Generals back ahead 21-19.

“This was definitely exciting,” said Mepham guard/forward Kara Castaldo, who had six points. “As a senior, this is something I’ll definitely remember for the rest of my life.”

The same could be said for Rawlinson and that uncontainable smile.

“It’s so cool to be on this court,” Rawlinson said. “This was a great experience.”