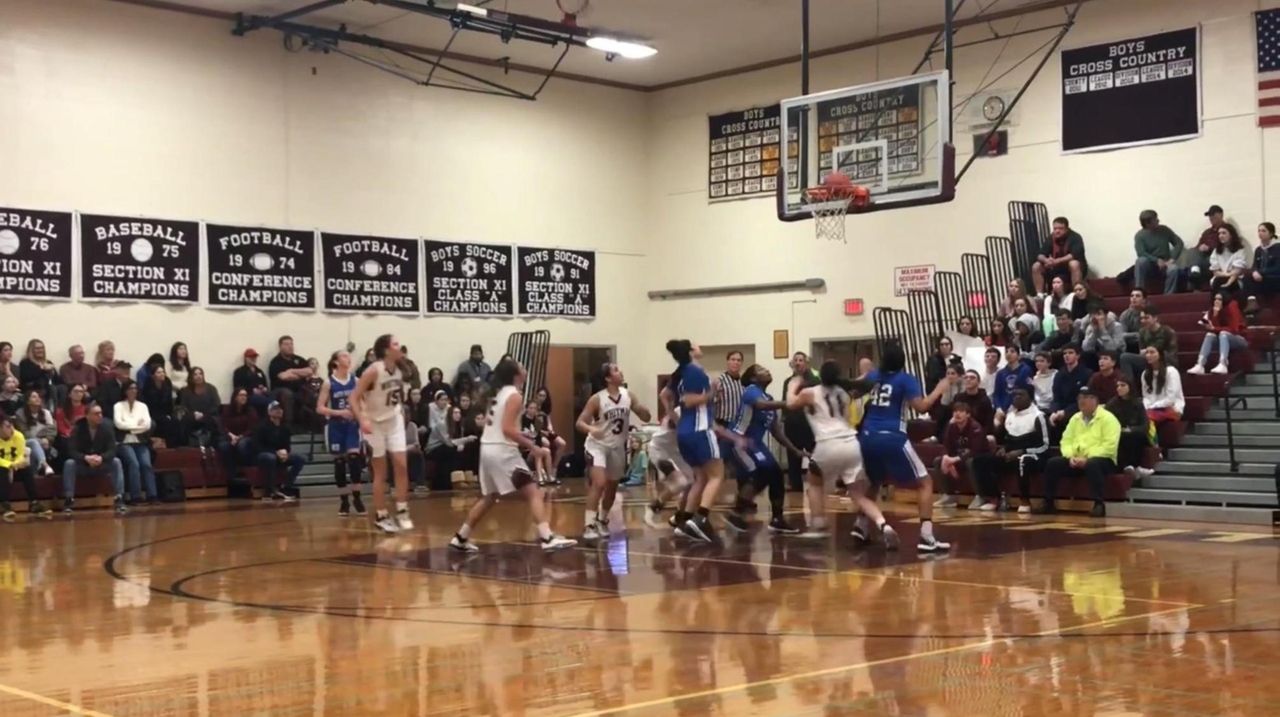 North Babylon senior guard Alanna Felix connected on the go-ahead three-pointer with just under three minutes left to lift the tenth-seeded Bulldogs over No. 7 Whitman, 49-43, in the first round of the Suffolk Class AA playoffs on Wednesday, Feb. 12, 2020.   Credit: Newsday / Laura Amato

Alanna Felix knew she had to hit one eventually.

The North Babylon senior guard said she’d been “shooting bricks, air balls,” as she was held to two field goals for much of Wednesday night’s Suffolk AA first-round matchup against No. 7 Whitman, but with just under three minutes left, Felix forgot about every miss.

Standing at the top of the three-point arc, Felix drained the go-ahead bucket, giving No. 10 North Babylon a lead it would never surrender en route to a 49-43 victory.

“I was like, I’m going to keep shooting because my team wants me to shoot and they believe I’m going to make the next one,” said Felix, who had nine points. “I knew, once it left my hand, it was going in.”

Felix’s bucket highlighted a late-game surge by North Babylon (13-8) after Jenna Stockfeder gave Whitman a 41-39 lead with 4:49 to play. North Babylon outscored the Wildcats 10-2 in the final three minutes and didn’t allow a field goal during the stretch.

“I don’t think they wanted the season to end,” coach Samantha Prahalis said. “They just refused to lose tonight.”

Prahalis said that she knew Felix “was due,” for the shot, saying, “knowing Alanna, the time we needed it, she was going to step up.”

After Sofie Tsavaris padded North Babylon’s lead, Stockfeder did her best to rally Whitman (15-6) by hitting two free throws to get her team within one point with 1:58 left. The junior forward finished with 22 points for the Wildcats, but it wasn’t enough as North Babylon’s defense stepped up.

Sparked by a strong half-court trap, the Bulldogs brought pressure from every angle, forcing late turnovers and holding strong in the post to limit Whitman to one-and-done possessions.

Nia-Lee Crosswell led the charge, hauling in 10 rebounds, including an offensive board and putback to cap North Babylon’s 5-point run at the end of the fourth.

“[Our posts] may be little, but they’re strong,” Felix said. “Every rebound, I believe they’re going to get it. They’re the toughest out there.”

North Babylon will take on No. 2 Longwood, the defending county champ, in the quarterfinals, at 5 p.m. on Feb. 19. The Bulldogs know it won’t be an easy game, but after grinding out a win in the opening round, they’re confident they can match up against anyone and make the shots when they have to.

“We know we have what it takes to take on any team in Suffolk County,” said junior guard Samantha Muller, who had 18 points and seven steals. “We’re going to keep going as far as we can.”