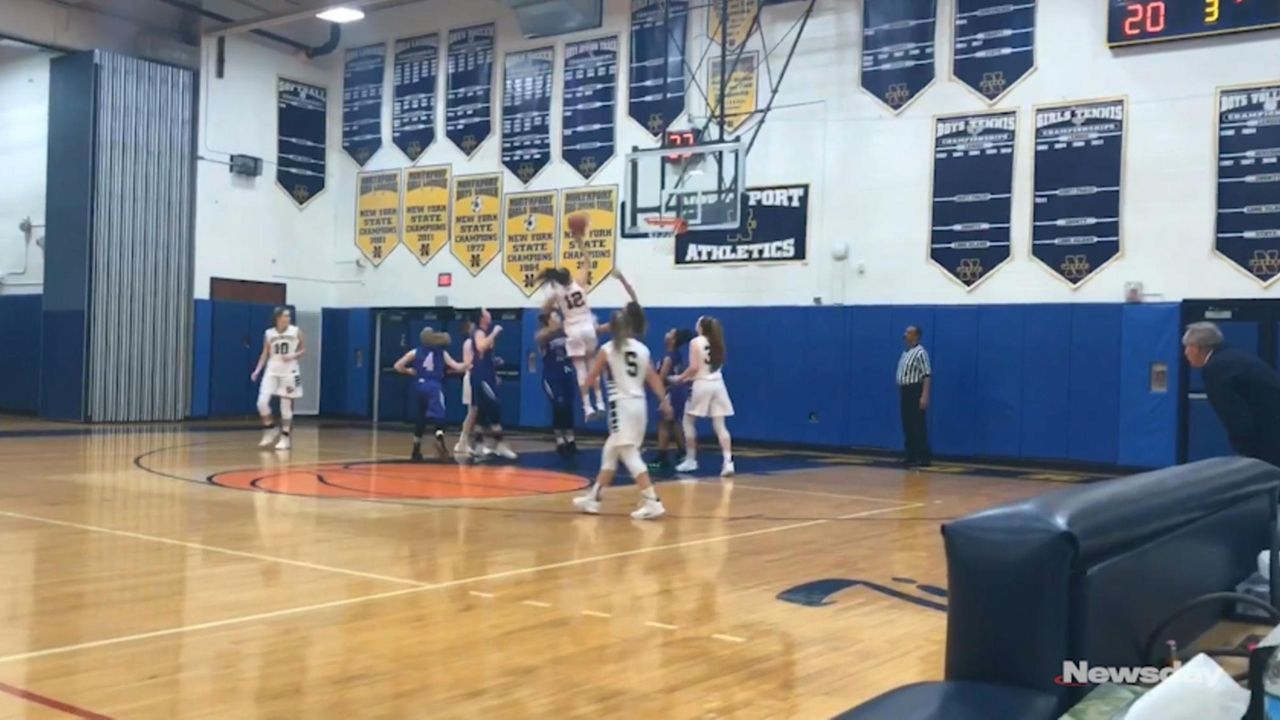 Danielle Pavinelli scored seven of her 11 points in the second half to lead the Northport girls basketball team to a 48-21 lead over Riverhead at Northport High School on Friday, Dec. 14, 2018. Credit: Newsday / Kenny DeJohn

The Northport girls basketball team learned firsthand on Friday night what it means for there to be a lid on the basket.

Quality looks just weren’t falling. The attempts were there, but the points weren’t. Few — if any — could be considered bad shots.

The Tigers shot 1-for-26 from beyond the arc but leaned on a tenacious trap defense against visiting Riverhead in a 48-21 win in both teams’ Suffolk League II opener. Danielle Pavinelli scored seven of her 11 points in the second half and totaled five assists and four steals.

“We knew our shots weren’t falling, so we had to come up somewhere else,” Pavinelli said. “Our defense with our steals and our fast breaks really helped us get our points since we weren’t able to shoot.”

Shea Cronin’s three-pointer swished from the left wing with 1:30 left in the third quarter, breaking Northport’s 0-for-17 start to the game from distance. The shot gave the Tigers a 32-16 lead.

“We usually hit like seven or eight, which would be a little more palatable,” coach Rich Castellano said. “But you can’t have your shooters not shoot.”

“This was definitely not our best, but in future games, I think our shooters will come up and do better,” Cronin said.

Both Cronin and Pavinelli praised the team’s defensive work. For much of the first quarter, Riverhead’s ballhandlers were met with traps before they could cross halfcourt. Castellano pressured everywhere on the court, keeping the Blue Waves uneasy.

Such a strategy can backfire if a team gets into foul trouble, though, and that happened in the second quarter. Leading 15-4 after Stockman’s layup, Northport committed a foul to put Riverhead in the bonus with 3:32 left before halftime.

Riverhead closed the half on a 10-4 run with six of its points coming from the free-throw line. Ishanti Gumbs scored four of her five points in that span and Riverhead trailed 19-14 at the break.

“If you can’t do one thing, then do the other,” Castellano said. “If you’re not feeling it offensively, you can always play defense.”

Cronin and Pavinelli took solace in the fact that the Tigers got this performance out of the way early. Now, they can move forward.

Said Cronin: “This is just a start.”