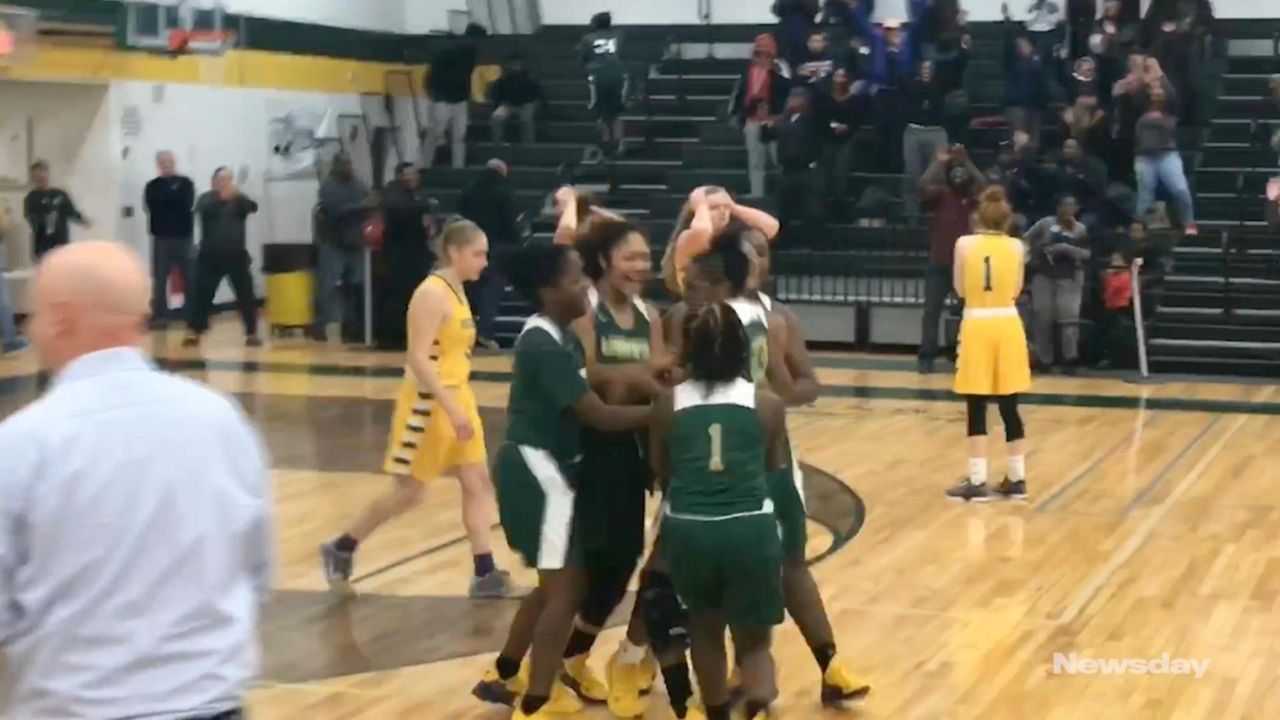 Taydra Simpson popped out beyond the arc from the free-throw line with three seconds remaining in regulation and the score tied.

Simpson, a freshman, was not the play’s first option. That was Nyia Longford in the corner. The second option would have been Janelle Brown, the inbounder, if Simpson had passed it back.

Instead, Simpson squared to the basket about five feet behind the top of the arc and watched for what she said seemed like an eternity. The ball swished just as the horn sounded, giving visiting Longwood a 68-65 win over Ward Melville in a Suffolk League I girls basketball game on Monday night.

FINAL: Taedra Simpson at the buzzer! 68-65 win for Longwood. pic.twitter.com/mkq9o0uXrm

“This is my second year on varsity,” Simpson said. “It was very exciting to hit the game-winning shot in a big game.”

Simpson, who had 17 points, was mobbed by teammates after an emotional fourth quarter, in which the Lions blew a 58-44 lead after the third quarter. The Patriots started the final period on an 8-0 burst, cutting the deficit to 58-52.

With Longwood (3-0, 2-0) leading 62-54 after a pair of free throws by Tatiana Stevens, Ward Melville (3-1, 1-1) went on a 9-1 run. Auburn-bound guard Lauren Hansen assisted Morgan Wenzler (10 points) inside, then made one of two free throws. After a Longwood free throw, Hansen made back-to-back three-pointers, tying the game at 63. She scored 13 of her 17 points in the fourth quarter.

On the Patriots’ next possession, Hansen hit a short fadeaway from the baseline for a 65-63 lead with 59 seconds to play. Ward Melville had a 5-on-4 on the play after Brown was injured.

“[A player] was coming across, and her shoulder kind of hit me in the face,” said Brown, who had 15 points and nine assists. “I got right back up. Mama raised a strong girl.”

After leaving the court for just a few seconds, Brown returned to orchestrate Simpson’s winner.

Brown also assisted the game-tying basket with 21 seconds to play. She drove the lane and dished to Stevens, who converted from the left side. Both the game-tying and game-winning plays were drawn up on the sideline, coach James Castiglione said.

He credited his “smart” group for minding the details and running the play through in its entirety. Then, they just had to wait for Simpson’s shot to fall.