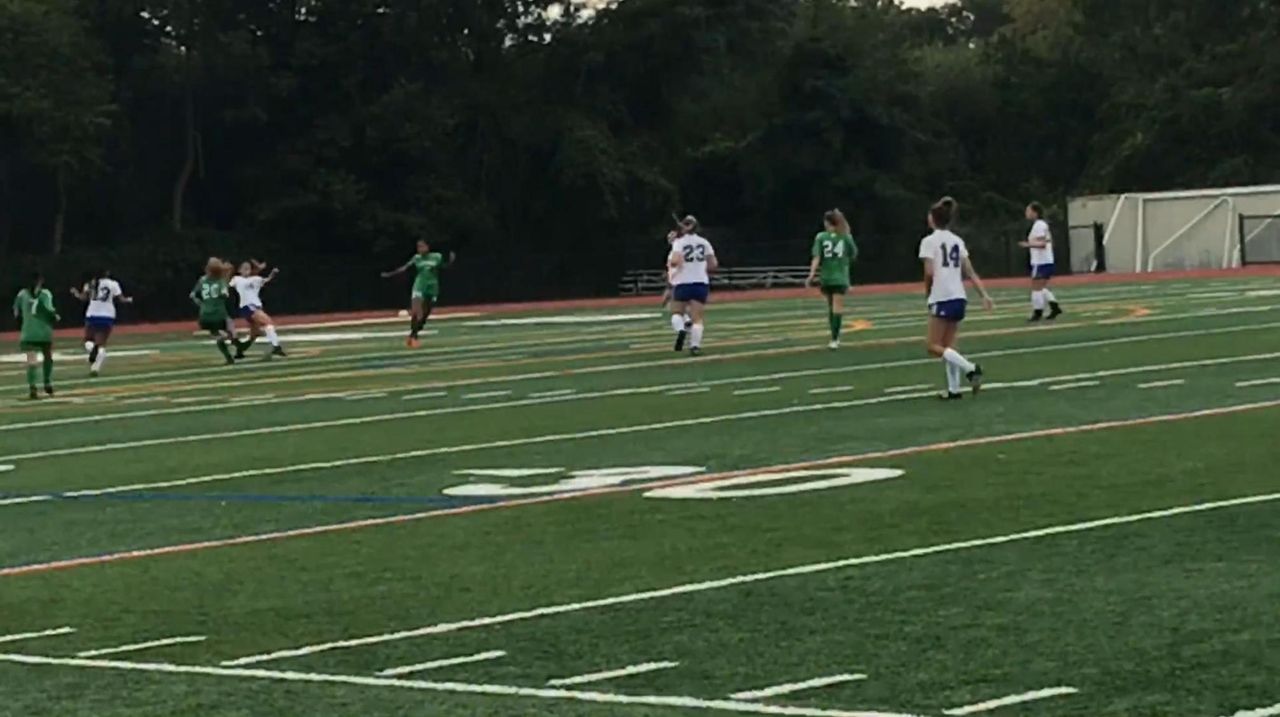 Stephanie Sparkowski made six saves to lead East Meadow to a 1-0 win over host Farmingdale in a Nassau AA-I girls soccer match on Monday, Sept. 16, 2019. Two days prior, she went 4-for-4 on extra points in East Meadow's football game.  Credit: Newsday / Owen O'Brien

Stephanie Sparkowski has spent her life trying to help teammates kick the ball between goalposts and under crossbars while stopping opponents from doing the same. On Saturday, her task was slightly different.

The Newsday All-Long Island girls soccer goalkeeper from East Meadow stepped on the gridiron for the first time Saturday, and did more than hold her own. The senior hit all four of her extra-point attempts, along with handling kickoffs, in the Jets’ 28-6 football win over Manhasset.

“I was really nervous,” Sparkowski said. “The first one felt real nice because it was my first kick of the game, so to get that off my chest felt really nice. But four touchdowns, so four extra points, so that’s always the goal — to go 100 percent.”

Two days later, Sparkowski demonstrated her booming foot in her primary sport. She sent a free kick 56 yards toward the net, which Myla McLeod corralled after a rebound and scored for the lone goal in East Meadow’s 1-0 win over host Farmingdale in Nassau AA-I girls soccer Monday.

“We’re lucky to have one of the greatest goalies,” McLeod said. “Whenever she kicks the ball, it’s an opportunity for me to score because she’s been able to reach the goal many times, just like that.”

Sparkowski remembers watching her brother, Dan, also a soccer player, kick for the football team and she hoped to do the same.

“Ever since he did it I thought it was pretty cool,” Sparkowski said. “And then one of the football coaches reached out to me and I just worked all summer toward it and I just thought it was a cool experience to be a part of.”

When Sparkowski, a five-year varsity goalkeeper committed to Michigan, told girls soccer coach Adam Hananel she wanted to kick for the football team, she said her coach was completely supportive.

Hananel said he jokingly told Sparkowski to “play dead or run off the field” after a kick, and not to try to make a tackle. But Hananel said it was exciting to see his female goalkeeper on the football field.

“We had parents that don’t even know her chanting ‘Sparky,’ and wanting to kick field goals all of a sudden,” Hananel said. “And the guys on the team with her being there for a week already trust her and they believe in her, so she’s a special kid.”

Sparkowski’s soccer teammates believe in her as well, regardless of what field she is playing on. The senior had six saves, including multiple diving stops, against a tough Farmingdale attack.

“I think she did great,” McLeod said. “I think it’s great for her to play [football too]. And she’s an inspiration, honestly, for the other girls to be able to play any sport they want.”

But there’s no question which sport is the priority for Sparkowski.

“Soccer, obviously, is my No. 1 sport, so any time I can help with a goal on this field it feels great to be a part of,” Sparkowski said. “Football is a similar rush, but soccer still gives me more of a rush than football.”