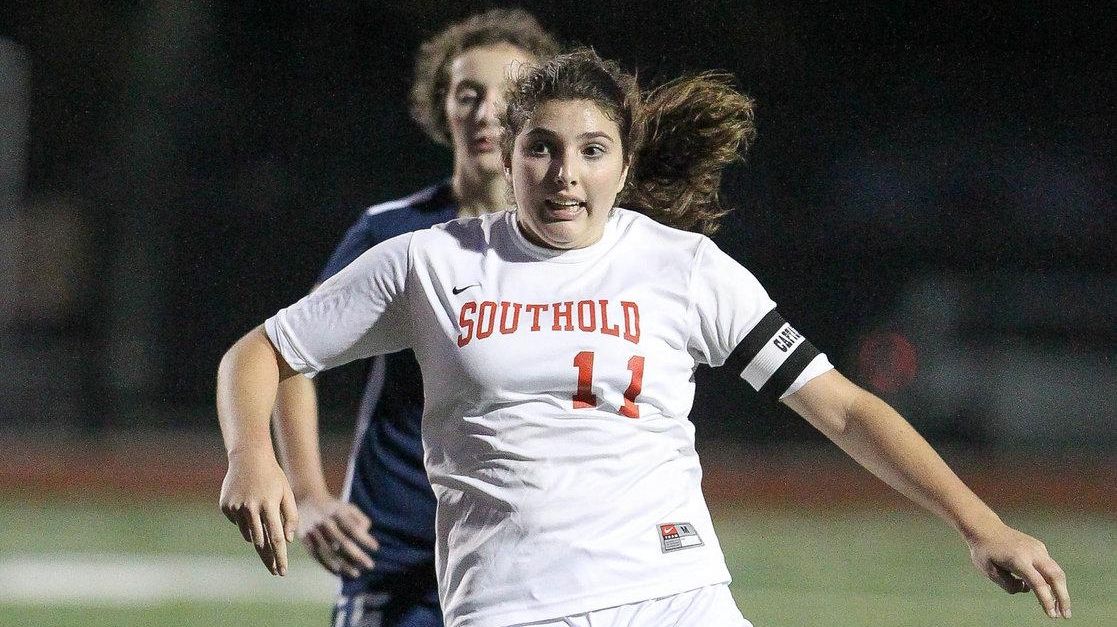 Whenever Grace Syron takes the field for the Southold-Greenport girls soccer team, she knows her mother isn’t far away.

Syron’s mother, Kathy, passed away from cancer Sept. 15. With the support of her coaches and teammates through out the season, Syron continued not only playing, but excelling, culminating with a two-goal performance Friday as No. 1 Southold-Greenport defeated No. 2 Stony Brook, 3-0, in the Suffolk Class C championship game at Islip High School.

“For years, she’s driven me to all my travel practices, all my games,” Syron said. “She was always there to support me. Winning this, especially, means a lot to me, because I wanted to win it for her.”

Syron headed in the first goal off a corner kick from Hannah Sutton 10 minutes into the game and scored a breakaway goal off a head-flick from Jillian Golden 10 minutes later.

“For Grace to do what she did, it couldn’t have been a better ending and a better script,” coach Chris Golden said. “I was so happy for Grace. I think it means so much to her and her mom is smiling down on her.”

Southold-Greenport (13-4) advances to the state Class C Southeast regional Friday at 4 p.m. against the winner of the game between Millbrook (Section I) and the Section IX champion. This was the program’s first county championship since 1987, Golden said.

“I wasn’t even born yet,” defender Annie Lincoln said. “It’s just crazy to be able to walk into the gym and see our plaque up there. See a banner on the wall. That’s really what we’ve been saying. Banner season all year.”

The team has rallied around Syron.

“I’ve just never met someone stronger than her,” Lincoln said. “I would be a wreck if I was her. I look up to her in so many different ways, on and off the field. She’s just an amazing person and amazing player.”

The team looks to continue rewriting the school’s record book.

“It means everything to me, this has been my goal for every year on varsity,” Syron said. “I wanted to win counties and I knew we could make it far and I’m so happy to share it with my team because my team is like a family to me.”