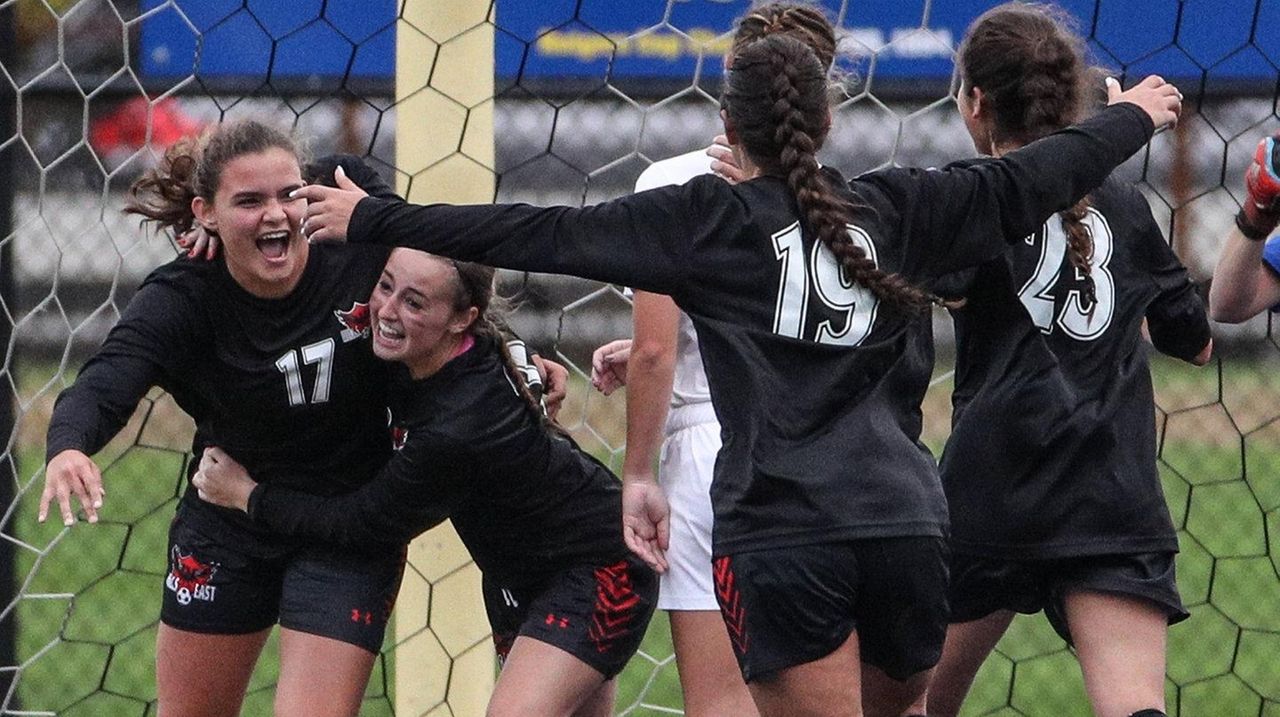 No. 5 Half Hollow Hills East defeated No. 4 West Islip, 1-0, in the quarterfinals of the Suffolk Class AA girls soccer playoffs, at West Islip, on Thursday, Oct. 26, 2017. (Credit: Newsday / Owen O'Brien)

The Half Hollow Hills East girls soccer team wasn’t cheated on its chances Thursday. After coming close but unable to score for nearly 70 minutes, Megan Koenig wasn’t going to let the next opportunity slip away.

After Jess Garziano’s free kick from 30 yards out hit the crossbar, a scramble ensued in front of the net. Koenig was the one to finish it, charging the net and scoring off a touch from Liz Gordin with 12:54 remaining in the game as No. 5 Half Hollow Hills East defeated host No. 4 West Islip, 1-0, in a Suffolk AA quarterfinal matchup Thursday afternoon.

When Garziano lined up for her free kick, she was hoping to put the goal away herself, but knew as long as the ball was kept in play, her team would have a good chance at finishing.

“I really was shooting for the corner but it went over the goalie’s head and I really thought it was going in and unfortunately it didn’t,” Garziano said. “But I knew my teammates were there and they just kicked it into the back of the net and it was a great feeling.”

West Islip, finishing 14-2-2, didn’t quit after the goal. The Lions pushed the pace, forcing corner kicks with scoring chances, including one Hills East goalkeeper Morgan Novikoff made a diving save on with 2:30 remaining in the game. Novikoff finished with seven saves.

“We knew this team won their division, too, so we knew this would be a big game,” Garziano said of the Suffolk IV champions. “The five seed vs. the four seed and we had to give it our all.”

The Thunderbirds’ backline, consisting of Emma Schleimer, Olivia Teng, Avery Francis and Lauren Fogel, with Garziano, Eleni Sofroniou and Athina Sofroniou at midfield had a strong game to limit West Islip’s chances, along with seniors Bailey Schleimer and Gabrielle Tayne attacking on offense.

“I knew I had something special coming in,” coach Tom Ciolfi said. “We have a little bit of everything. We have senior leadership, we have skill, we have size.”

And with a matchup with the undefeated, defending county champions next, the Thunderbirds feel confident about their chances with Koenig saying, “This will definitely pump us up for our next game against Northport.”