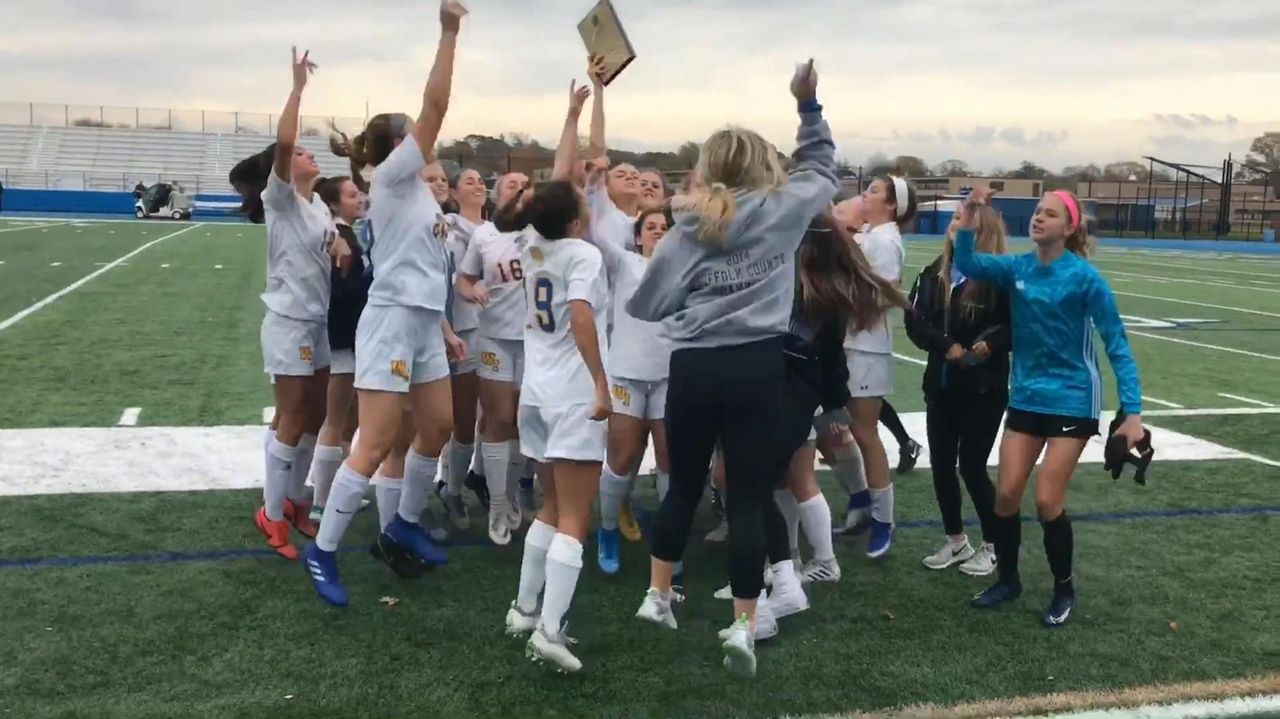 When Jaden Hampel took to the soccer pitch Tuesday, there was a chance it was the final game she would ever play for West Islip.

Hampel, an All-American lacrosse player at West Islip, is committed to play lacrosse at Stony Brook next year. But soccer has always been near to her heart, due in part to a connection that goes back to her father, who passed away when she was in eighth grade.

The senior forward has the letters ‘BH’ for her father, Brian, written on her thigh during games. She wasn’t ready for that tradition to end, and made sure it didn’t. Hampel scored the game’s lone goal as No. 3 West Islip defeated top-seeded Smithtown West, 1-0, in a physical girls soccer Suffolk Class AA championship Tuesday afternoon at North Babylon High School.

“This means everything in the entire world,” Hampel said. “I’m not playing soccer after this and I say I’m playing for my dad. Soccer was always me and my dad’s thing so right now, I just feel overwhelmed with emotions.”

West Islip (15-3-2), which won its first county title since 2015, advances to play the winner of Massapequa/Syosset in the Long Island Class AA championship/Southeast Regional Final at Berner Middle School in Massapequa Saturday at 4 p.m.

But the victory was far from easy for the Lions. Smithtown West (15-1-1) advanced to the Class AA state semifinals last year and entered Tuesday undefeated.

The Bulls had two goals erased for offsides penalties after playing the final 20 minutes down a player following a red card.

“It was just an emotional rollercoaster,” West Islip coach Nick Grieco said. “We had some chances, they had some chances and we took advantage of our opportunity. But they’re undefeated for a reason. They are big and strong and we had to match their intensity by bringing it and I think the girls did that.”

Hampel’s goal with 1:59 remaining in the first half came as the last of a series of headers after Kaitlyn Krupski’s free kick from 45 yards out.

“I knew Kaitlyn could get it in the box and when it was up in the air, I knew it was a battle between me and the goalie because I was so far ahead of everyone else,” Hampel said. “I just knew I had to beat her hands to the ball.”

“We practice those a lot,” Krupski said, “so I knew exactly where Jaden was going to run to get a head on it, so I just knew get it in the 18 (yard box).”

And the physical, back-and-forth nature of the game certainly wasn’t lost on Hampel.

“Definitely crazy,” she said. “This was definitely a county game to remember.”

The West Islip backline of Brianna Siclari, Amanda Squeglia, Ali Getfield and Krupski faced pressure from Smithtown West nearly the entire game. Freshman goalkeeper Isabella Tomeo had 15 saves in the win and knew the two offsides calls changed the game for the Lions.

The Lions embrace playing a physical style and Hampel said regardless of the sport, matchups between Smithtown West and West Islip are always some of the toughest contests.

“We give the girls a mentality not to back down to anybody and we say, ‘How do you beat a bully? Bully them back,’” Grieco said. “And I think they buckled down, they didn’t crack under the pressure and they found a way to win. We’ve been doing it all year.”