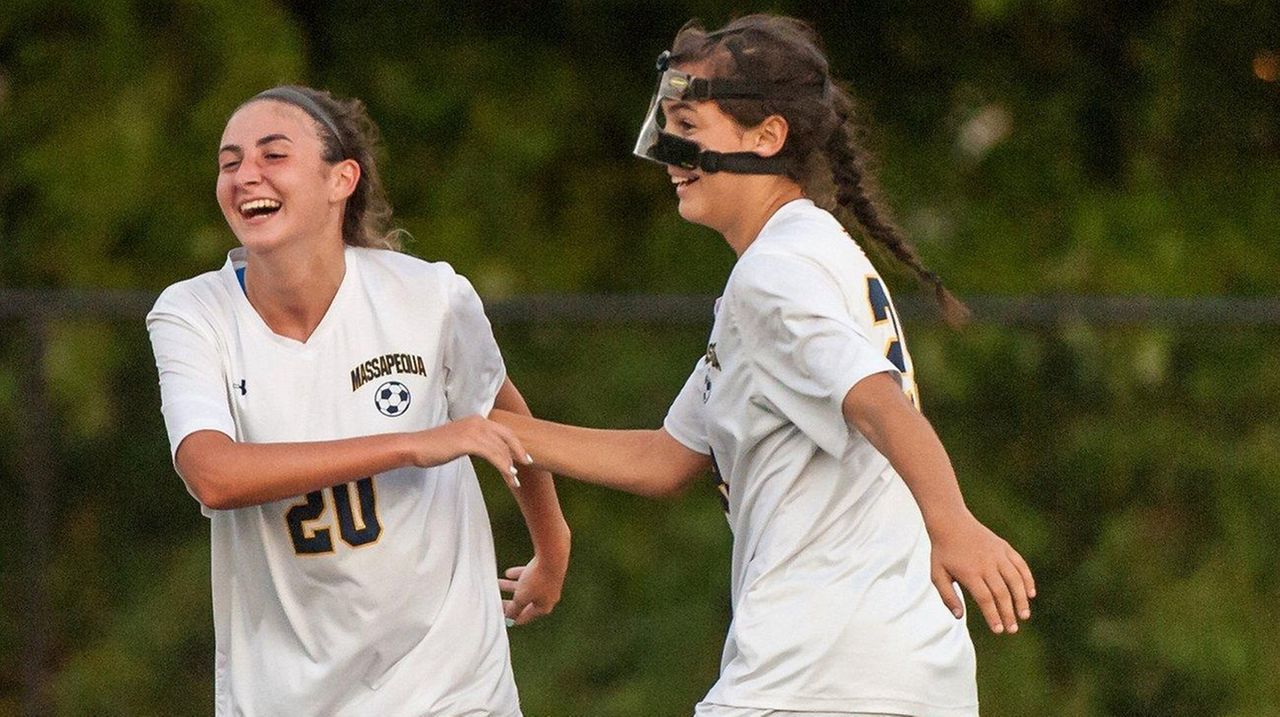 When a two-loss season sets off potential alarms, the conversation must be about an elite program.

That’s exactly what the Massapequa girls soccer team has been, the winner of 13 of the last 14 county titles, including four straight Long Island championships. The Chiefs have won two of the last three Class AA state championships while playing in the last three state finals. But after two losses to Calhoun and two ties in conference play, Massapequa appeared vulnerable for the first time in recent memory.

“We were down and we weren’t winning and we weren’t at our potential,” senior midfielder Morgan Camarda said about a scoreless tie to East Meadow earlier in the season. “And winning our last two games, shutouts, we definitely had a lot more confidence. We came out stronger.”

Massapequa can now make that three straight shutouts after a 2-0 home victory over East Meadow in Nassau AA-I girls soccer Wednesday. It was East Meadow’s first conference loss of the season for the Jets, who enter the playoffs with a 6-1-3 conference record.

“I think this win really topped it off,” senior goalkeeper Haylee Poltorak said. “I think after just being on this winning streak, we’ve really come together as a team.”

This is often a time when the Chiefs take their play to a new level with the playoffs starting next week. With a younger, less experienced roster this season, Massapequa’s captains and tenured players have helped show the rest of the players on the team what it’s like to play high-intensity games in preparation for the playoffs.

“We’re very excited,” junior midfielder Grace Bernardi said. “A lot of players are new and they’ve never been here, so I guess it started off slow but now they realize what it feels like to win games and win as a team.”

After a scoreless first-half Wednesday, Massapequa (6-2-2) struck first on Kate Fiola’s goal off an assist from Emma Cooney with 22:05 left in the game. Cooney then found the back of the net with a header off a cross from Jaclyn Portogallo with 18:02 to go.

“That was so key,” Poltorak said. “I knew that if they got a goal on us first, heads were going to go down. It could have been a bad game but since we got the first goal, it really got the momentum going and allowed us to get that second goal, too.”

The Chiefs’ back line, which coach Bruce Stegner complimented for its strong play throughout the season, including Elisabeth Hingher, Kirstyn Kilmeade, Alexandra Valentine and Brenna Brown with Camarda and Bernardi often dropping back to help, had another strong game. Poltorak made four saves in the win.

“Haylee’s just so solid in net,” Stegner said. “She might be the best keeper in the county, if not, one of the best keepers for sure on Long Island.”

And with the improved play to close the season, including a 3-0 win over defending state CHSAA champion Sacred Heart, the Chiefs are entering the playoffs with their same championship aspirations.

“I think it’s key for us to try to score goals and not just outplay teams or tie them,” Stegner said, “but to actually come out ahead and build their confidence that they’re a better team and we can finish and score goals.