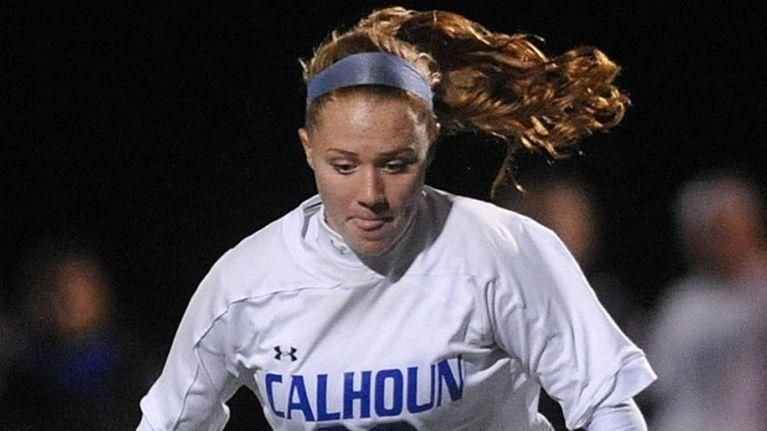 Although it’s been a year since Calhoun played for a girls soccer county championship, it doesn’t feel that long for Annie Coogan.

“Last year at the [county finals] was basically yesterday to me,” Coogan said. “And just to go there again, we’re never going to stop.”

Specifically, Coogan won’t stop what she has a knack for in big games — find the back of the next. The senior scored No. 1 Calhoun’s second goal of the game in a 3-0 victory over No. 4 Port Washington on Monday at Cold Spring Harbor High School in a Nassau AA semifinal.

Calhoun (11-2-2) will play No. 3 Massapequa for the championship at Cold Spring Harbor High School on Friday at 2 p.m.

“Our craving never stops for it,” Coogan said. “It’s all we want right now. We’re going to work so hard for it.”

The Colts came out aggressively, controlling possession and creating opportunities on offense. A backline of Mia Advocate, Ellie Beichert, Lauren Rossi and Julia Babbo with Taylor Curcio and Katie Healy at midfield and Julia Miguel in net limited the chances for Port Washington (5-11).

Nicole Devlin scored the first goal off an assist from Kristen Dobkowski with 27:35 left in the first half. Later, Coogan made a run off a free kick from Babbo, getting to the front of the net and scoring to extend the lead with 10:46 left in the half.

“I just knew I had to score it no matter what,” Pearson said, “and I was going to run through everybody to score it.”

The Colts enter their second straight championship game with confidence.

“I think it’s a little bit different this year because the girls really feel like they really do belong and that it’s within their grasp,” coach James Raucci said. “But the competition in this conference is really good, so the girls just have to keep playing.”

“It feels great,” Fiola said. “I knew we were going to win once the second goal was scored.”

Fiola’s first goal came off an assist from Jaclyn Portogallo with 5:43 left in the first half and her second goal came on a breakaway with 29:28 left in the game.

The defense of Brenna Brown, Elisabeth Hingher, Alexandra Valentine and Kirstyn Kilmeade with Grace Bernardi at center midfield and Haylee Poltorak in net had another strong game, which coach Bruce Stegner calls the “foundation” of the team.