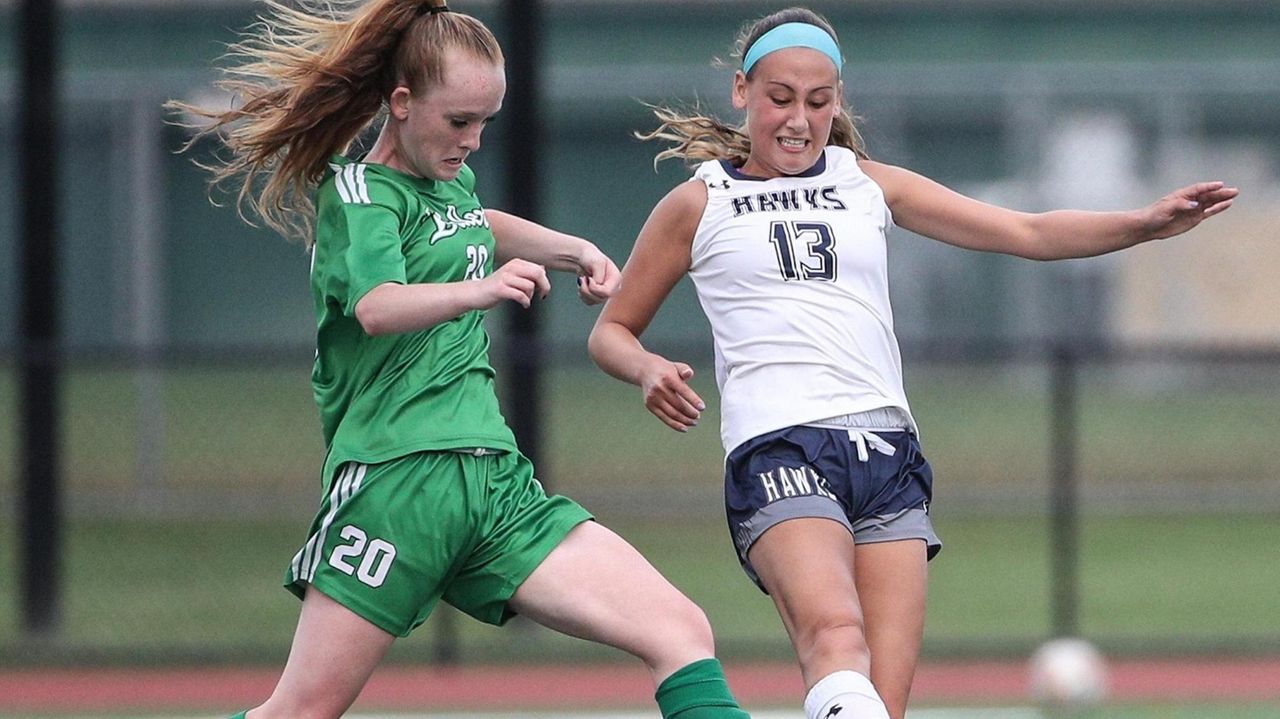 It wasn’t the way the Farmingdale girls soccer team would have drawn it up, but the players certainly will take the end result.

Emma Best found herself with the ball in the middle of the field after a blocked clear attempt and quickly sent a shot on goal from about 25 yards out. The attempt bounced off the crossbar and the goalkeeper and found the back of the net with 1:06 remaining for the final goal as host Farmingdale defeated Plainview-Old Bethpage JFK, 2-1, in Nassau AA-I girls soccer Monday.

“[I just knew] that I kind of had to score, the end of the game was up to me,” Best said. “I was kind of surprised. I was expecting to kick it over because I kick a lot of my shots over.”

Best not only surprised herself, but even some teammates with how the late play unfolded.

“It was really insane,” midfielder Amanda Stoll said. “It hit the crossbar and I was like ‘No,’ but then it hit the goalie and went in, so it was really cool.”

One person it didn’t surprise was coach David Otto.

“Emma just has a nose for the goal,” Otto said. “She doesn’t back down from anything. She just charges right in there, that kind of reckless abandonment, and just keeps pushing things toward the goal.”

Best also scored the opening goal, heading in a cross from Allison Kiernan with 15:23 remaining in the first half.

“I was like, ‘Well, when I cross it, I have to cross it to a green shirt,’” Kiernan said with a laugh. “I saw Emma running in and I tried to hit her and I did and she aimed right and got a goal.”

Plainview-Old Bethpage JFK (2-2) kept pushing on offense though, and Lexi Vegoda found the back of the net off an assist from Amanda Milana with 11:26 remaining in the second half. But Farmingdale (1-3) had the answer.

“We’re fighters,” midfielder Jaden Keener said. “We’ve been working really hard at practice even though we’ve been losing a lot. It’s been hard for us to get it in the net and just that feeling of her scoring in the last minute, it made all the hard work paid off.”

“Everyone looks at the offense and the goal, and that’s important,” Otto said, “but the defense held us in there.”

And following the Hawks’ tying goal, Farmingdale went right back to work on the attack.

“When they tied it up, you didn’t see them let down,” Otto said. “They picked their game up even more. We were constantly pushing, pounding, knocking at their door, so they wanted it.”

“This was huge because we’ve been fighting so hard in all our games,” midfielder Julia McHugh said. “So it stinks we’ve been losing, but this is a huge win for us that we’ve been waiting for.”