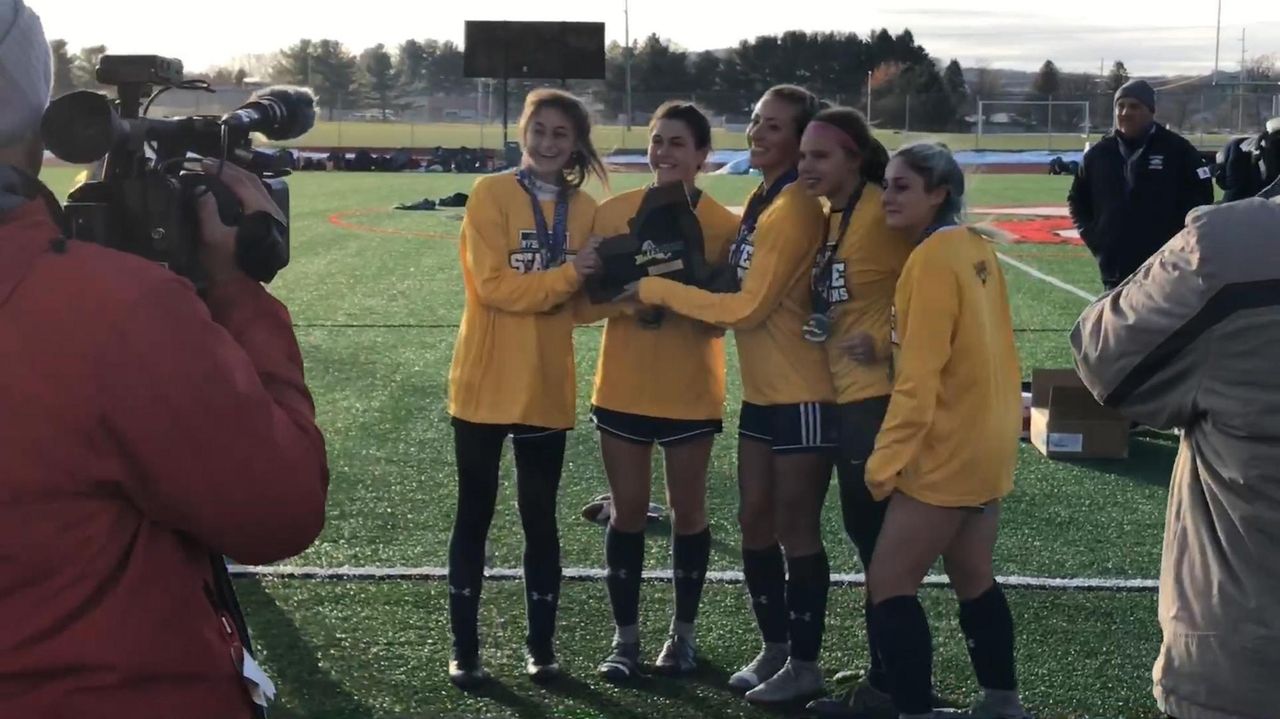 Shortly before the start of the playoffs, coach Adrian Gilmore sent a photo of an empty spot on the wall in the school gymnasium to the team. The area was surrounded by plaques of programs such as football and lacrosse with their team pictures after celebrating a state championship.

Gilmore circled the empty area, drew an arrow, and sent it to her players.

“Someone said, ‘Is there a ghost there?’” senior midfielder Lakin Ciampo said.

The answer: “No, that’s where our plaque's going for states,” Ciampo said.

From that moment on, the Wildcats had the motivation to make history for their school. No Shoreham-Wading River girls soccer team had ever won a state title.

The Wildcats defeated Spencerport, 2-0, in the Class A state championship at SUNY Cortland Sunday afternoon. Then they posed for the picture that will eventually fill the void in the gymnasium.

“This has been the goal since Day One for us,” senior midfielder Elizabeth Shields said. “And little things along the way — like that empty spot being there in the school and nobody doing this before us — that has all been an immense amount of motivation for us to just keep going and work harder every single game.”

And when Shields had her moment to help deliver that title, she wasn’t going to let it slip away. The senior went on a run to the net and finished a cross from Gianna Cacciola to give the Wildcats a 1-0 lead with 15:29 remaining in the second half.

“I knew that ball had to be put in the back of the net. I didn’t really have any other option at that point,” Shields said. “There wasn’t much time left in the game, it was still 0-0 and I was making that hard run in and I said, ‘Something has to come out of this.’ It was just all or nothing in that moment.”

“I knew somebody would be there, so I played it in,” Cacciola said. “I knew (Shields) would finish it.”

Shoreham-Wading River (17-2-2) extended its lead to 2-0 with an empty-net breakaway goal with 23.9 seconds remaining from Ashley Borriello following Spencerport (16-4-2) bringing the goalie to attack off a corner kick. Borriello had a difficult week, battling what she said was a 100 degree fever a few days prior, but she said she “never” thought she would miss the game.

“We knew she was going to pull through, she always does,” said senior goalkeeper Alison Devall, who made three saves. “But nothing changed. It was like she never affected by it.”

The Wildcats backline of Brooke Langella, Alexa Constant, Sarah Hobbes and Maddy Joannou with Lydia Radonovitch at midfield helped control the game’s pace. And when the senior class returns to the Shoreham-Wading River gymnasium and next year’s team starts summer practice, the ghost will be replaced by a snapshot of the ghost busters.

“We’ve kind of been feeding off that, just a little motivation for them,” Gilmore said. “We’ve said all year they are hard nosed, they work hard, they are a great unit when they play together and I think just that little bit of motivation seeing that picture helps you.”