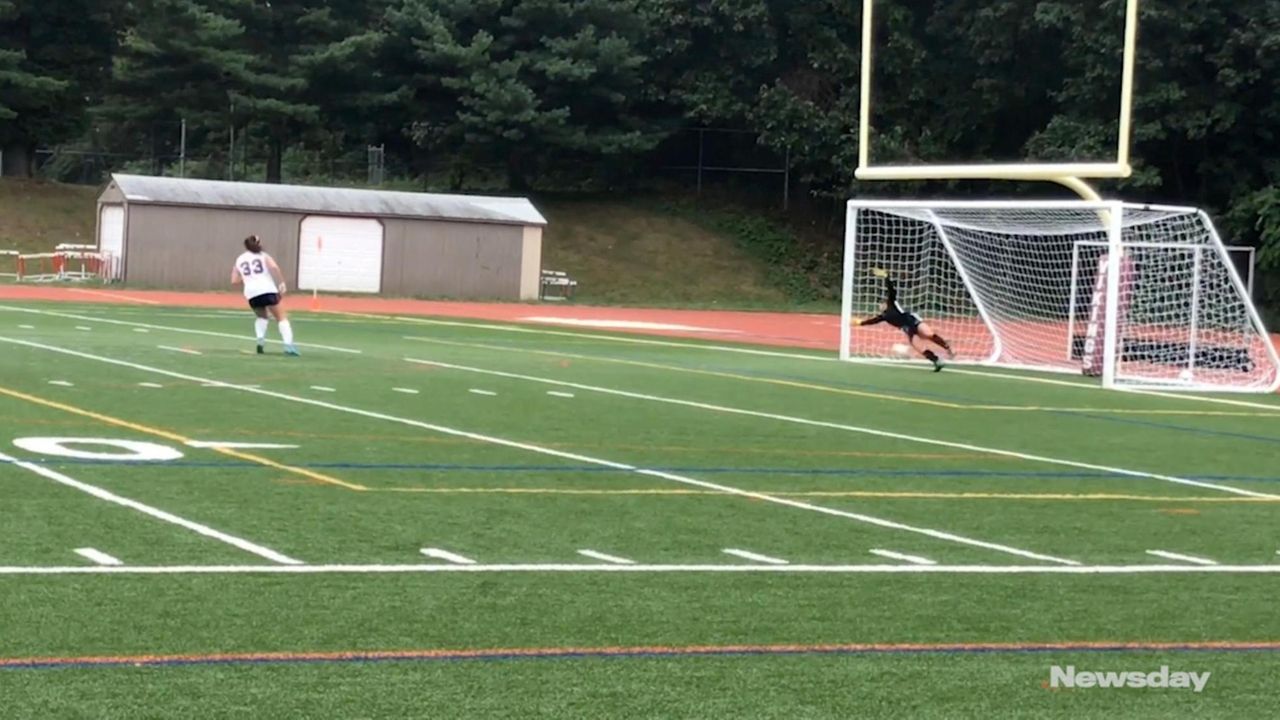 South Side goalkeeper Julia Cavanagh was in a position no goalkeeper wants to find herself in.

Barely five minutes into Friday’s soccer matchup against North Shore, Cavanagh was staring a down a charging forward on a clear breakaway. With little time to think, Cavanagh raced out of the net to pressure the ball, ultimately making the stop to keep the Vikings off the scoreboard.

“When it went through, I just knew I had to get my angles and I had to make that big save to come up with that,” Cavanagh said. “It was a huge turning point in the game to know that we could come up with those saves and our defense didn’t let up for the rest of the game.”

It was the most impressive of Cavanagh’s 11 saves as South Side defeated host and defending county champion North Shore, 2-0, in both team’s Nassau A-I opener.

“We don’t want to see those right away,” said South Side coach Jenn Abgarian about the breakaway. “But we’re confident in her.”

And although Cavanagh was standing alone in the net, she might have received some help. Dressed in a pink shirt with pink gloves and a pink headband with the initials “MR,” the junior goalkeeper said she’s honoring one of her neighbors, who passed away from childhood cancer.

“I feel like I should commemorate her,” Cavanagh said, “and that’s why I have her initials on my headband.”

South Side opened the scoring with Mia Delmond finishing a run on the right side for a goal with 2:06 remaining in the first half. Barrett added the Cyclones’ second goal off a penalty kick with 28:18 remaining. North Shore goalkeeper Giuliana Graziosi also had a strong game with 10 saves, including a breakaway stop.

But the Cyclones realized how the game quickly could have turned against them and they credited Cavanagh for preventing that.

“It was a great save, she’s a great keeper and we really need her back there,” midfielder Alex Chruma said. “That really set the outlook of the game, considering that if that was a goal, it would be a whole different tone for the game.”

After losing to North Shore twice last season, South Side has been looking forward to this matchup.

“We were very excited for today,” Chruma said. “Tough team, North Shore’s a great team and we really just wanted to get the outcome we deserve.”

The Cyclones, winners of 14 county titles since 2000, lost in the Nassau A semifinals last season and is looking to return to the top of the county.

“We’re definitely very motivated to get there,” Cavanagh said. “We know this group is a really good group, really talented, and we all work really well together, so hoping for the best.”