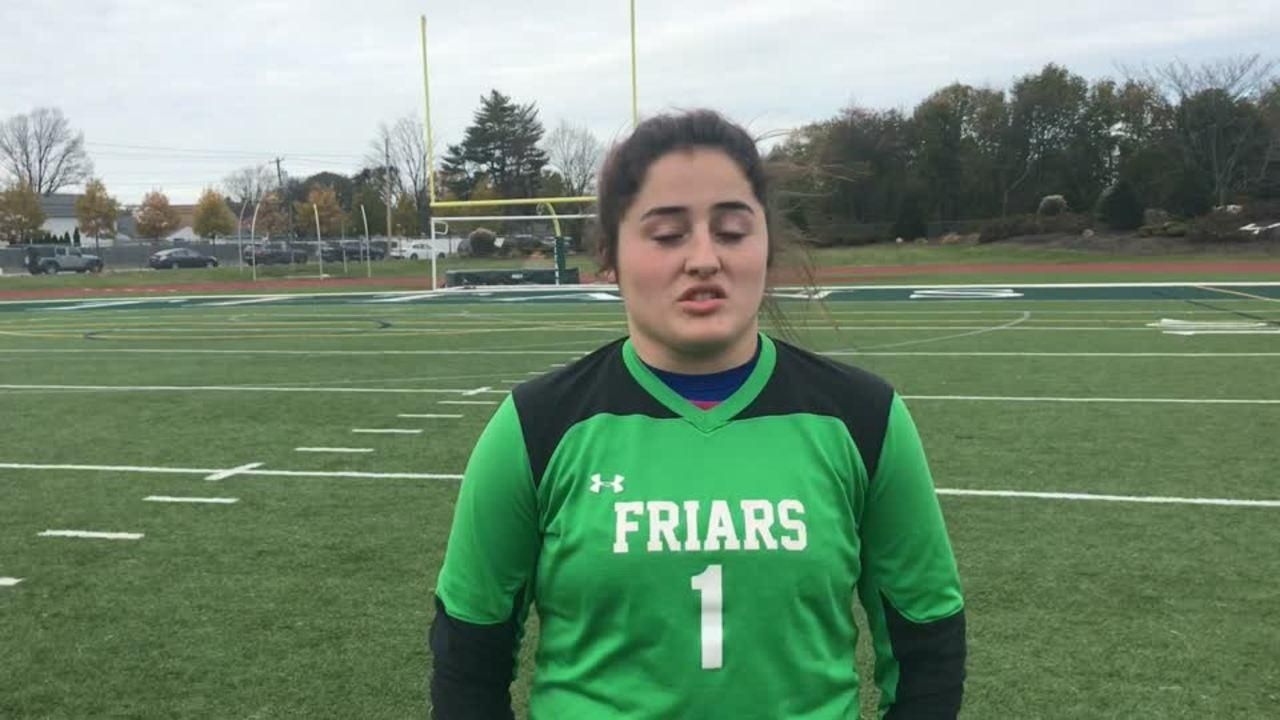 Kaitlyn Mahoney was counting down the seconds.

The St. Anthony’s senior goalkeeper weathered some late pressure in the state CHSAA girls soccer championship at Holy Trinity Sunday, but held strong in net, directing the Friars’ defense and waiting for the final whistle. As soon as it came, Mahoney was swarmed by teammates, celebrating a 2-1 victory over Xaverian and a third straight title.

“I was counting right until it hit the end,” said Mahoney, who finished with eight saves. “When I saw double zeros, I was just thinking, my high school career is over, but I wouldn’t spend it with anyone else and I wouldn’t trade my team for the world.”

After St. Anthony’s jumped out to an early 2-0 lead, netting both goals in the first six minutes, Xaverian’s Giana Romano made it a one-goal game with 27:18 left. The Friars (16-0-1) responded quickly, locking in on defense and slowing down offensive rushes.

“I give a lot of credit to Xaverian,” coach Sue Alber said. “A 2-0 lead is a scary lead and they go down and score. Then you’re kind of back on your heels. We had to defend most of the second half.”

With Xaverian looking to net the equalizer in the final minutes, Mahoney was a wall in net and a general for St. Anthony’s back line. She said the Friars dropped the midfield back and marked up on the Clippers forwards, allowing St. Anthony’s to bring “pressure, two on one.”

“That helped out because then we were able to shut some of their girls down,” Mahoney said. “They were able to get some shots, but it was less than what they would have had if we didn’t do that.”

Mahoney made sure one of those Xaverian shots didn’t find the back of the net in dramatic fashion, coming off her line with just under 19 minutes left, and making a save from her back.

“If I hesitate, anything can happen, so I have to make a decision either to stay back or go forward,” Mahoney said of her mindset. “I chose to go forward. I just hoped for the best.”

The Friars’ defense played hero late, but St. Anthony’s first-half goals gave the team some breathing room down the stretch. Sophomore forward Olivia Perez got the scoring started off an assist from senior Nicole Gordon’s in the third minute. Sophomore Emily Riggins followed up less than three minutes later off an assist from junior Gina Maucere.

“I knew I had to get it in,” Perez said of her goal. “When we got those first two goals, we knew that the rest of the game was all us.”

Alber called the game “the most challenging state championship,” the Friars have had during their streak, but said she was proud of the defense and pleased to see two sophomores score. St. Anthony’s is hoping that’s a sign of things to come, looking to build toward another championship next season.

“It’s never easy to win state championships,” Alber said. “The senior class has been great, and they’ve left their mark on the program. Hopefully in the years to come, we can continue doing it.”