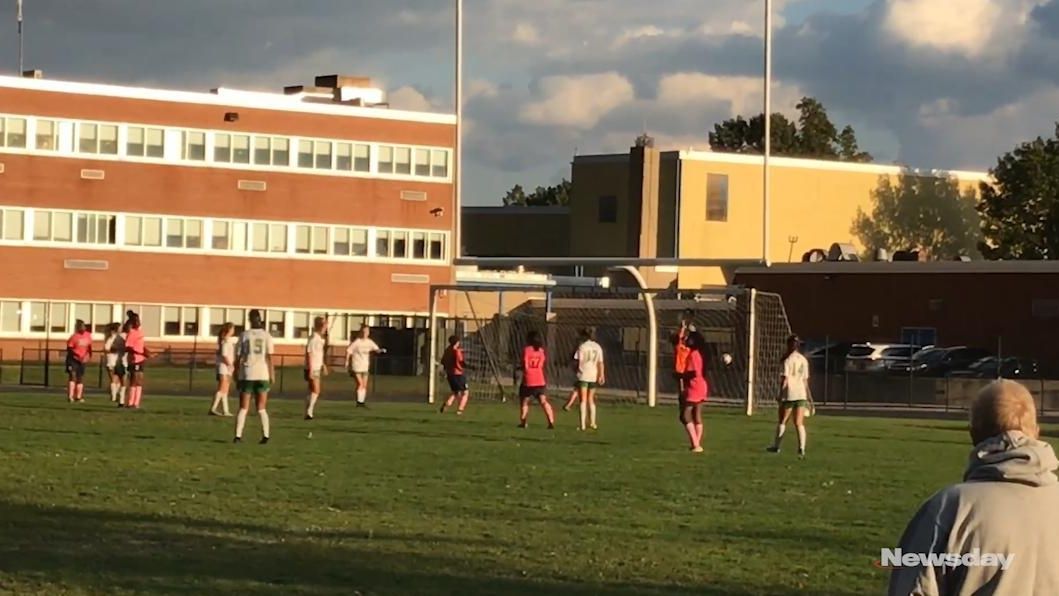 Occasionally, Sydney Moore will pull off a move or a play on a soccer field that even surprises her.

The Farmingdale midfielder has the uncanny ability to drop a pass with perfect placement, and pair that with the shot of a striker. Moore plays all over the field, but when she’s near the corner may be when opponents need to be on highest alert.

On Wednesday, Moore found Allison Kiernan off a corner kick for a goal, and later beat three defenders to score from a nearly impossible angle toward the sideline for the final goal in Farmingdale’s 3-1 victory over host Baldwin in Nassau AA-I girls soccer.

“I don’t really know,” said Moore with a laugh when describing her goal. “I was trying my best to get a cross so someone could hit it on goal, but it just squeezed in between the goalie and the post, so I was lucky on that one.”

Moore, a four-year varsity player committed to Boston College, brings the best out of her teammates, with coach David Otto crediting the senior’s field vision ability.

“She sees the field unbelievably, making passes other people don’t see,” Otto said. “She distributes the ball as well as anyone.”

Baldwin (5-4-2) opened the scoring when Diane Guiracocha played a through ball to Alyssa Hillian for a goal with 23:56 left in the first half.

But Farmingdale (6-4-1) answered when Amanda Stoll sent a through ball to Emma Best, who after a nice move scored with 19:54 left in the half to tie the score at 1. With 2:52 left in the half, Moore found Kiernan, who headed in the go-ahead goal, for the Dalers.

“Usually I don’t get a chance to play offense, but I’m tall,” said Kiernan, a defender. “So usually when there’s a corner kick, I come up and I try to score. It felt really good.”

The Farmingdale backline of Rebekkah Joseph, Emily Diaz, Nicolette Lospitalier and Kiernan did a good job of limiting Baldwin’s scoring opportunities, with Rebecca Morales and Gianna Vitelli splitting the game in net.

After making the move up from Nassau AA-II to AA-I this fall, the Dalers are excited to keep their season going into the postseason. After conceding the team was a little nervous at first moving to the top conference, Moore said the players are ready for next week’s playoffs.

“This has definitely been one of our best seasons,” Moore said. “We’re really confident we can make it far this year and it’s one of the first years in a long time that we’ve believed we can make it further than ever.”