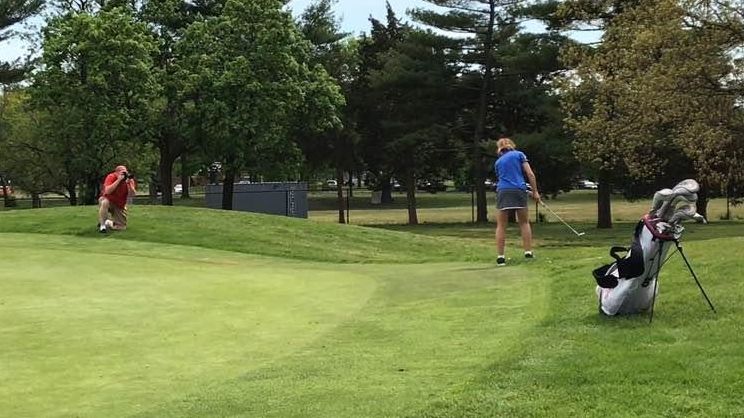 A year after placing fourth at the CHSAA championship, Emmah Federman took the title.

The Kellenberg junior shot a 5-over 77 Tuesday at Eisenhower Blue. The score, which was an 11-stroke improvement from last year, earned Federman a trip to suburban Buffalo for the state championship.

“I think she realized, wow, I’m really good. I can up my game with a little more practice,” Doran said. “Emmah’s got a great work ethic. She’ll just go out and practice every weekend.”

Federman built a four-stroke lead through the front nine by making par on every hole.

“The reason I was even through the first nine was because I didn’t miss a green, so it was definitely my irons,” she said. “That was definitely what got me to shoot even.”

Murphy, who trailed Federman by five strokes after nine holes, mounted an impressive comeback with birdies on the 13th and 15th holes. As she prepared for another birdie putt on the 18th hole, she said she was unaware that she trailed Federman by one stroke for the title.

The putt missed by inches.

“I felt relief, bad at the same time,” said Federman, who watched from the gathering area behind the 18th hole. “I really like Tess. She’s one of my friends. Different emotions for different reasons.”

Murphy only realized how close she was when she saw the final scoreboard.

“I was disappointed because it’s my senior year, but it’s fine,” said Murphy, who split CHSAA Player of the Year honors with Federman. “It’s a good score. Not complaining.”

“She’s a really great golfer,” Harding said. “I’m just so amazed and very proud of her.”

The CHSAA state championship is scheduled for Sunday — with Monday as a rain date — at The Links at Ivy Ridge.