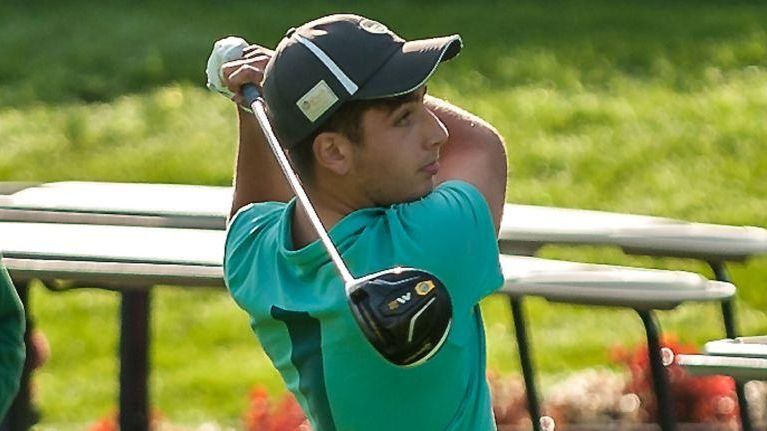 When Shane DeVincenzo began his first round at the Suffolk boys golf county championship on Thursday, he was just hoping to secure a spot in the state tournament, but after the round, his mindset changed.

“Every year coming into the counties, the goal is to always make the top nine,” DeVincenzo said. “After I shot (2-under-par) 69 in the first round, I knew I could go and put some pressure on the other guys.”

The Port Jefferson junior followed up with an even-par 71 on Friday to capture the county title with a 36-hole total of 2-under-par 140 at Rock Hill Golf and Country Club.

“He put a circle on the calendar for today (Friday) prior to the start of the season,” Port Jefferson coach Chuck Ruoff said. “I am proud of him because he wasn’t going to let last year define him. I know that in his heart last year gave him a lot of motivation. For two days he just went out and played his best.”

DeVincenzo, who qualified for his third consecutive state tournament, worked extremely hard in the offseason on improving his putting, leading to nine birdies in the tournament.

“I worked specifically on the short putts, and it showed this week in the counties,” DeVincenzo said. “I made a lot of key putts and that really saved me.”

In addition to DeVincenzo, eight other golfers qualified for spring’s state tournament.

Foster, Pat Healy of Harborfields’ and Sean Haselton of Sayville finished tied for second with 146.

Huntington’s Tyler Gerbavsits (148), Sayville’s Brendan Smith (152), Smithtown West’s John Pawlowski (153) qualified along with Kyle Zere of Connetquot and Matt Giamo of Huntington who finished tied for eighth at 154. They earned the final two spots by besting Andre Chi of Harborfields in a one-hole playoff.

In the team competition, Sayville won with an 813 ahead of Harborfields (826) and Smithtown West (831). After finishing second the previous three seasons, this was the first county title for Sayville since 2013.

Haselton, Smith and Matthew Danielson, who shot a 160, were eighth graders when they won the county championship in 2013.

“I had a special group of seniors who I have had on the team for six years,” Sayville coach Sean McLaughlin said. “It has been great watching them grow up on the golf course and seeing the amount of work they put in and they really deserve this. To send them out with a county championship is definitely fitting.”