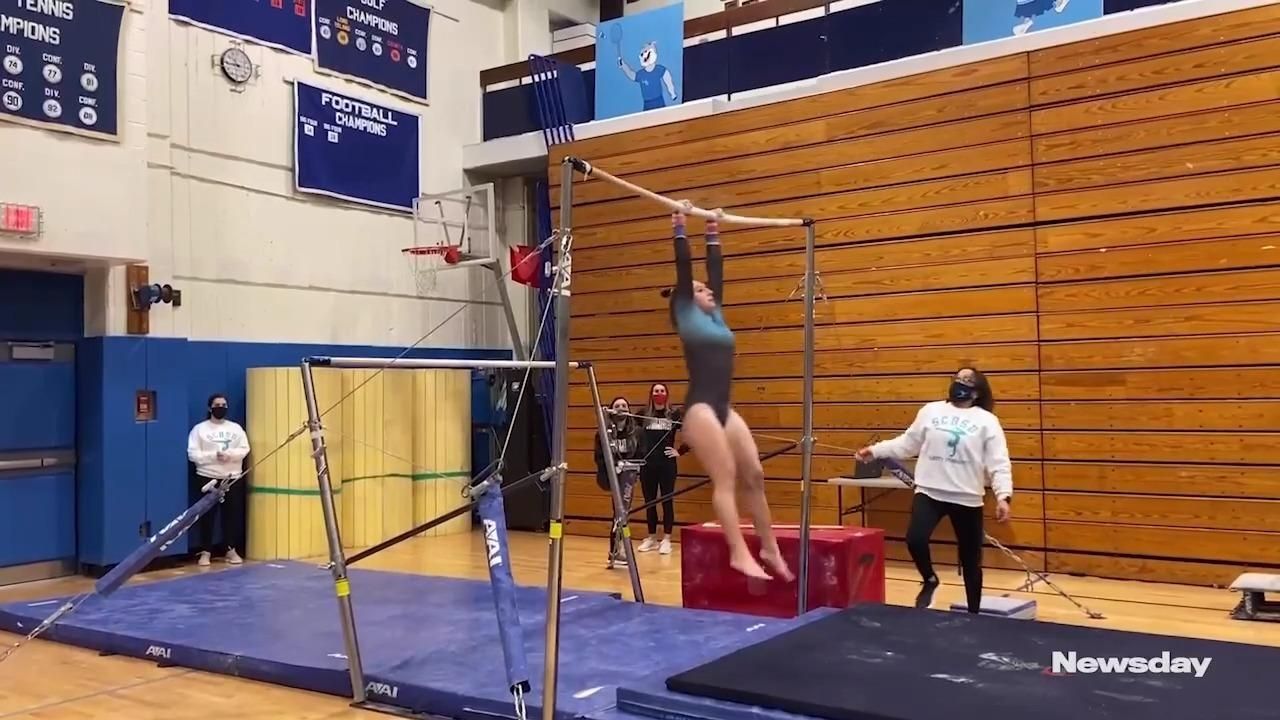 Kaylei McDonald, Kristen Greenwood and Emily McKie discuss how excited they were to be competing in their senior seasons at the Nassau gymnastics championships on Saturday, Feb. 13, 2021, at Long Beach. Credit: Newsday / Julia Elbaba

Shani Sirota did it once again on Saturday.

For the second straight year the Roslyn junior gymnast earned a county title in the all-around, as she scored a 37.10 at the Nassau individual championships at Long Beach.

"I was really excited to come here because it’s been a crazy season," said Sirota, who also won the uneven bars (9.325), and vault (9.550) for the second consecutive year, in addition to floor exercise (9.375) for the first time. "Just the thought that this could even happen is crazy and exciting. And I was so pumped to show what I could do after this whole quarantine thing."

"Shani is just such a consistent athlete," Roslyn coach Stephanie Orfini said. "We come into this with the mindset that we practice awesome and we’re going to have an awesome meet. Just do what you do for practice and this is just for fun. Pump it all, all smiles and go for it.

"Whatever you ask her to do she can do. She just puts that exclamation point on the end. She does it with a lot of pizzazz."

Yet with the state championships canceled because of the COVID-19 pandemic, Sirota’s set of victories will instead punch her ticket to gymnastics’ first-ever Long Island championship, which is tentatively scheduled to take place in late April.

The top six finishers in each event on Saturday also qualified for the historic meet.

"It’s kind of cool because I get to be in the first one that’s ever happening," Sirota said. "Although it’s sad that there’s no states, it’s still an opportunity to show what I can do for Long Island and Nassau."

Plainview-Old Bethpage JFK junior Payton Sack was the day’s other champion, as she won the balance beam (9.275) to claim her first county title.

"This was very gratifying," Sack said. "At the beginning of the season I was obviously very uncertain. Even before this I wasn’t really practicing as much as I should have since we were just getting back to school. So I think this was definitely a step up and very surprising to me."

Cohen also finished the season with the most all-around points among Nassau seniors.

"I was ecstatic when I found out that we were actually going to have a season," Cohen said. "Even though it is a lot of preparing just for a month season but I’m glad I got to do it and that we had the county meet, especially here at Long Beach."

Nassau gymnastics coordinator Kim Rhatigan was elated to see the event come to fruition and watch a talent like Sirota shine once again.

"I’m just so happy that we even got to this point," Rhatigan said. "In November we didn’t know if we were having a season. We had a whole season, it had its hiccups with COVID but we dealt with it…We made it to today, which I think is the biggest prize of all…And Shani is equal, if not stronger, on some events than other gymnasts I’ve seen here over the years. She’s really a diamond for Long Island."