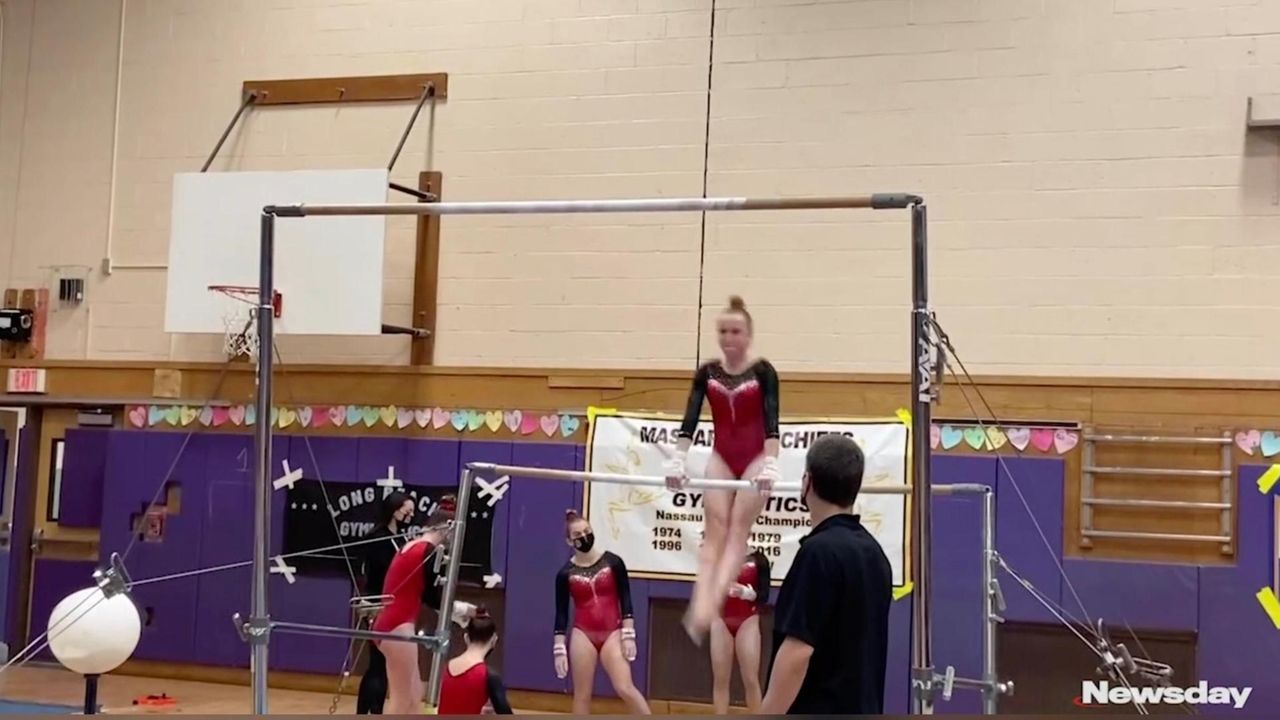 It was a morning full of jumping, tumbling and vaulting – all going on at a dizzying pace. But, in the end, the commotion had turned to quiet and all eyes were on Syosset’s Allie Jacobs.

Jacobs was the last competitor on the floor at the Saturday session of Nassau gymnastics team championships, held at McKenna Elementary School in Massapequa. All other events were complete by the time she got on the mat. All that was missing from Jacobs’ performance was a spotlight.

"I actually really like it," Jacobs said. "It definitely made me more excited. Floor is also my favorite event. I don’t really mind other people watching. It kind of just gives me more pressure to do better and show everyone what I can do."

They left the spotlight duties to Jacobs, who shined with a 9.10, good for first place in the session and second overall in the championships. South Side’s Payton Waller, who competed in Friday’s first session, had the top floor score (9.15).

"Tumbling is definitely my strong [suit]," Jacobs said. "I also just love dancing with the music too."

Jacobs was second in the All-Around with a 35.75. Port Washington’s Stefanie Carta, who also competed Friday, won with a 36.05.

Jacobs, who was also second on vault (9.15) and beam (9.15) helped Syosset capture the team championship with 171.9 points. Plainview-Old Bethpage JFK was second with a 162.9. The title was extra sweet for Syosset, a four-year-old program who won two years ago and fell by less than one point last year.

"Last year was definitely a disappointment and it wasn’t what we were hoping for coming off of a win the year before," said Olivia Donach, a Syosset captain who was eighth on bars (7.75). "After that, we realized we had to put everything we had into this year and really work as hard as we could to make a comeback."

Elsewhere, Plainview’s Payton Sack was third in the All-Around (35.05) and scored a 9.25 to tie for first with Carta on beam. Sack said she put together a complicated beam routine, knowing she would score with it.

"The level of difficulty was a little harder, on the back handspring, back tuck," said Sack. "It’s more of a dynamic skill and I think that made me stand out…I think it’s not something you see very often and I’m really proud of myself that I went out, did it, and stuck it. That’s all that matters."

"I was actually very nervous for vault because [Friday] I wasn’t doing good vaults at practice," Sanborn said. "But, I just took deep breaths and thought that my vaults are usually good and I can do it. I took all the bad vibes out and did a good vault."