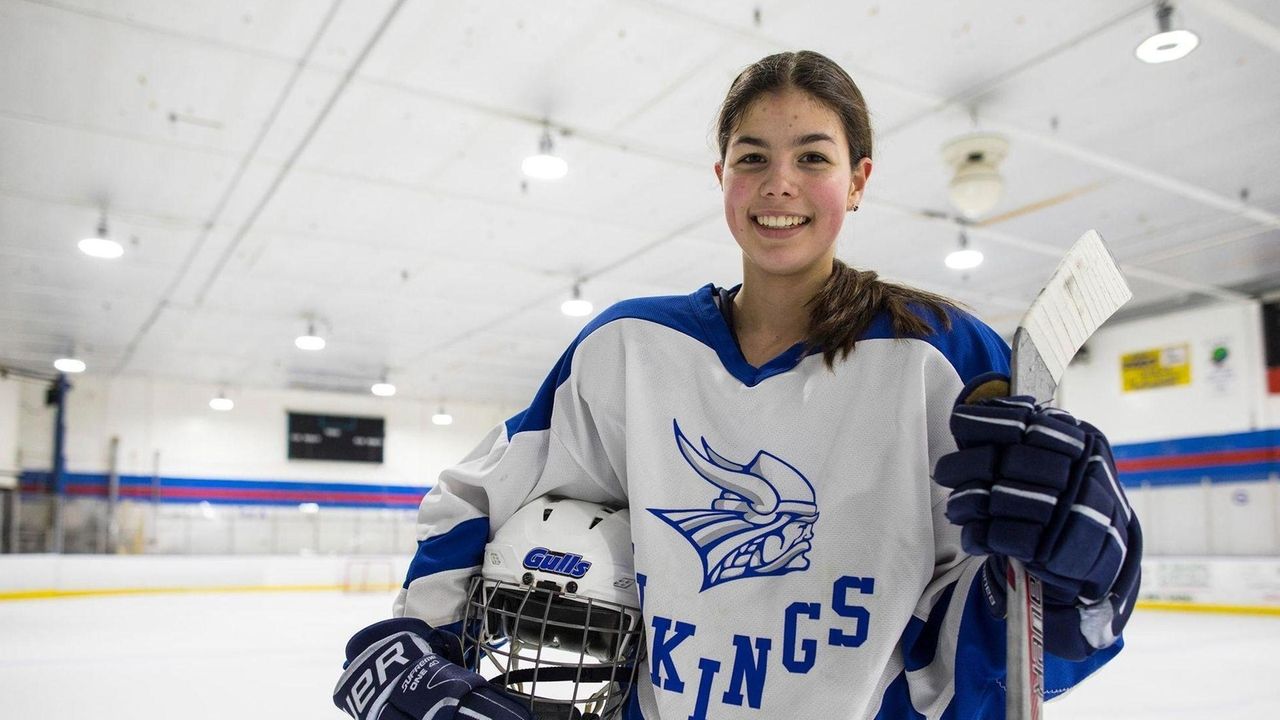 On Sunday, Jan. 29, 2017, Port Washington sophomore Sofia Kuusisto talked about her love of the sport of hockey. Sofia is the only girl on the school's hockey team. She loves it, and her coach and teammates also love what she brings to the team. Credit: Newsday / Chris Ware

Mary-Elizabeth McCourt and Sofia Kuusisto walked out of their locker room at the Oyster Bay Skating Center together in November, no longer hidden by their hockey helmets and bulky pads.

McCourt’s team, Long Beach, had just defeated Kuusisto’s Port Washington, but when the boys high school game ended and everyone headed off to change, McCourt, a goalie, and Kuusisto, a winger, went their own way.

When they emerged, “some kid was like, ‘Wait, they were girls? What?’ ” Kuusisto said. “Sometimes kids aren’t too welcoming, especially on other teams, with me being on the ice, but they have to suck it up. It makes me want to play harder and show that just because I’m a girl, it doesn’t mean I’m any worse than them and I can play as hard as them and I can be as good as them.”

Sometimes challenging, ultimately rewarding — so goes the life of a female hockey player in the Nassau County high school league. Dozens of girls have strapped on skates at the varsity level club teams over the years, said Nassau County league president Jim O’Gara, and there are more currently playing at the lower levels. Fewer — about four or five in the past 20 years, he estimated — played a non-goalie position like Kuusisto does. What’s more, she skates on the first two lines and the power play.

“Sofia is unusual but not unique,” O’Gara said. “I love watching the girls play because invariably, they always seem to have a greater hockey intelligence and technique. . . . They play their position, so the puck always seems to come to them.”

Kuusisto started playing when she was about 8 years old, and has had a relatively straightforward journey into the brotherhood (despite that small “they were girls” incident in November, her teammates have always welcomed her, she said, and her parents always supported her love for the sport). McCourt’s journey was far different: The Long Beach senior had to overcome a number of objections and challenges before finally being allowed to play.

“I was trying out and I was on a line with like six other guys,” McCourt said, recalling a day in 2015, when she vied for a spot on the Long Beach Lightning club team, a year before joining the high school squad. “And they were shoving, like pushing me so that I would get moved to the back. Looking back on it, I’m a little mad that I just let it happen . . . and even the parents were looking at me, like, ‘what is she doing here? She’s going to take the spot of someone already on the team.’ ”

Giving credit to her coach

What most people didn’t realize then is that McCourt had worked too hard to get to that point to consider backing down. She had worn down her parents, who worried about the dangers of hockey, and especially about her playing against boys. She had put together a financial plan to pay for her gear. When some doubted her size — at 5-1, she’s about a foot shorter than a typical male goalie — she worked with goalie coaches to improve her technique and positioning. When her personal goalie coach, Sam Mignoli, died last summer at 23, she became even more determined to stick it out, no matter the challenges, she said. She now works with another coach, Jon de Castro, and plays for the New Jersey Colonials girls travel team as well.

“He was my mentor,” she said of Mignoli. “He connected me to Long Beach and he kind of convinced the coaches that I could play. If I had to dedicate my success to anyone, it would definitely be him.”

She made it onto the Lightning in 2015. After failing to make the varsity team that same year, she tried again, and joined Long Beach as the second-string goalie this season. The team won the Nassau County Michelino championship, and will go to the state tournament in March.

“It’s an incredible feeling” to see her succeed, McCourt’s mother, Deirdre, said, but it took Deirdre a while to get there. “To see her little physical self come out there on the crease with these huge men bearing down, it’s not easy being a hockey mom . . . [When she first asked to play] I was vehemently opposed. We were afraid for her health. We were afraid for her teeth. She wore us down.”

Long Beach’s first-string goalie broke his hand and the third-string goalie had undergone an emergency appendectomy. There was only McCourt, who would be the first girl to start in a Long Beach varsity hockey game. She earned the 3-0 shutout.

“She played terrific,” said Brand. “The guys have come around finally – not that there was any disrespect or anything like that, more like (since she was new), it’s almost like a freshman coming in.”

Kuusisto’s introduction to hockey wasn’t nearly as dramatic — Port Washington has had a girl on its team for at least the last eight years, coach Alex Caruso said, and Kuusisto’s dad, Simo, encouraged her to play hockey from the very beginning. Even so, Kuusisto herself was concerned when the Vikings made the jump from junior varsity to varsity this year.

“There was hesitation,” she said. “I was a little unsure about how I would fall into that and my safety — if I would get injured with the checking and stuff. We just decided to take it slowly and go into it and I’m doing OK. I think just my positioning — if I play my positioning well and I cover the people how I need to, then I think I’m able to compensate for that. Just having a good IQ makes up for it.”

So far, so good. Though Port Washington is still finding its bearings in the new varsity landscape, Kuusisto impressed her coach and teammates all season. She hopes to play hockey in college, and it certainly seems like it will be an option for her.

“She’s one of the best on our team and always leading by example,” Caruso said. “Every game Sofia plays in, the energy, her forechecking, she’s always on top of other defensemen, pressuring the puck. She moves the puck very well. I’d just like to see her score more goals, but that will come.”

“She’s a very, very good female hockey player,” he said before correcting himself, ever so slightly.