Nassau County Executive Laura Curran sent a letter to the chief of Nassau's high school sports governing body on Friday asking school and athletics officials to find a way to put student athletes back on the fields, courts and cross country trails during the COVID-19 pandemic.

She asked Pat Pizzarelli, the executive director of Section VIII, to “implement a sensible solution that allows high school sports to safely resume in accordance with science-based guidance issued by New York State.”

To support the move, Curran cited how Nassau residents acted responsibly in turning the county from one of America’s worst hot spots to one of its safest earlier this year.

Nassau's Section VIII decided last week that it would not hold sports in the fall and instead have all three seasons in a compressed schedule from January to June in 2021. It has said that with new guidance from the state, it was open to reconsider. 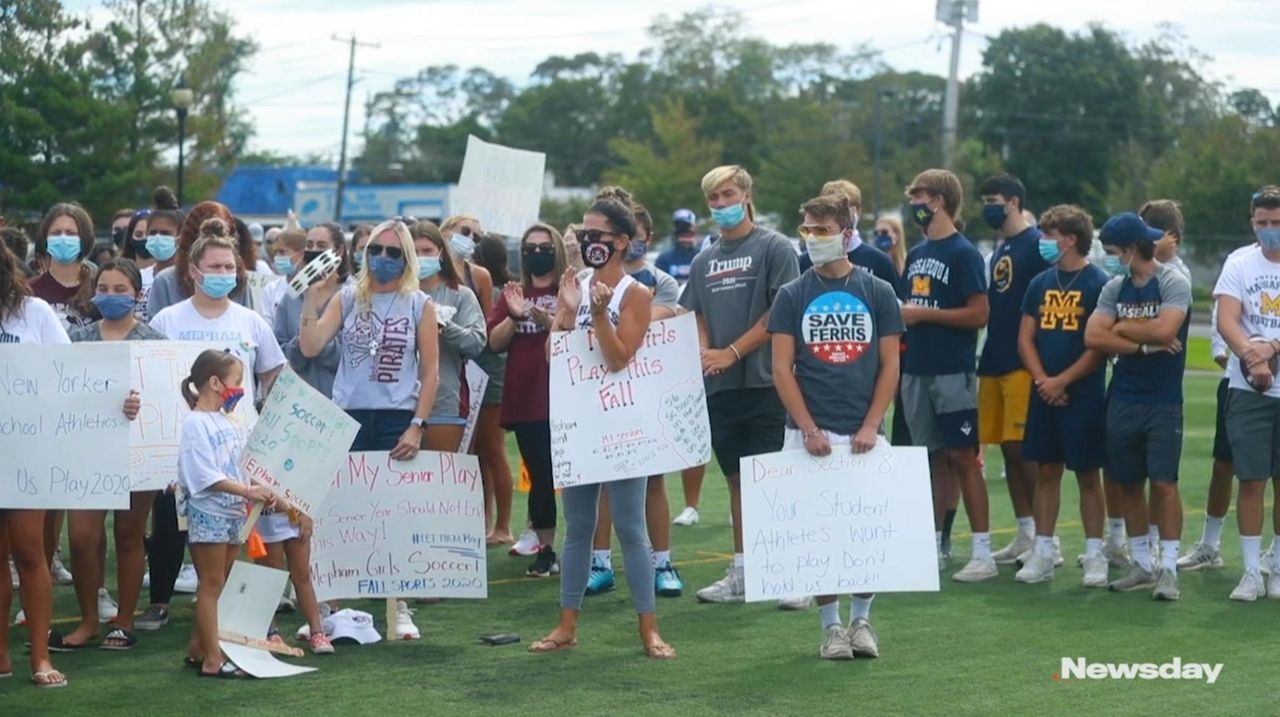 Families rally for Nassau high school sports season Parents, student-athletes and local officials gathered in Massapequa to protest the postponement of the high school fall sports season by the county's school superintendents. A previous version of this video did not specify which officials in Nassau County made the decision. Newsday's Faith Jessie reports.  Credit: Newsday / Raychel Brightman

The Section VIII decision last week involved the unanimous voting of its superintendents’ board and came two days after Gov. Andrew M. Cuomo issued guidance that would allow low-risk sports to begin practice and play on Sept. 21 if local officials deemed it safe. Suffolk County sports officials voted to try to play this fall.

“Nassau began a careful, data-driven reopening 99 days ago, and the results we’ve witnessed since have been remarkable,” Curran’s letter reads. “Nassau’s positivity rate has held steady at 1% throughout the summer because our residents have stayed vigilant . . . allowing private sporting leagues, organizations and camps to resume play under new, sometimes creative safety guidelines.”

Pizzarelli said the focus will continue to be on the health and safety of student-athletes while pointing out that high school sports should not be compared youth and club sports.

"Our superintendents have already decided that they'll reassess the situation after school begins," Pizzarelli said. "But we still have not received any further guidance from the government or state education department that changes anything.

"The County Executive wants athletics back as soon as possible and I believe she feels very strongly about that," he said. "But we have to maintain and be diligent about our stance in regard to the health and safety of our children. I’m getting tired of people comparing youth and club sports to the high school dynamic. It’s a completely different animal."

Curran also sent a letter to Oyster Bay Town Supervisor Joseph Saladino requesting that he not say Nassau County is responsible for postponing high school sports because the county executive's office and the county legislature had nothing to do with the decision. Curran's letter said Saladino made "misleading statements" at a rally in Massapequa on Monday. In response, Saladino said, "This letter makes no sense as I properly placed blame on Nassau County Section VIII and the County Executive would have known that had she attended the student athlete rally. We should all work together to support our athletes and bring back high school sports.”

“High schools have the issue of (using) their own the facilities. High schools have transportation issues that club sports don’t have. That’s two right there that make them different,” Zayas said. “You also have to look at the guidance and the rules and restrictions that are being placed upon schools that they need to be able to affirm and they need to be able to meet those restrictions: they have to offer school as well as sports.

“It’s not as easy as just saying, ‘Youth sports were allowed to play. They did great. High school should be able to play too,’ ” Zayas added. “In theory, yes, but there's other elements variables and factors that schools have to contend with that youth sports don't have.”

On Friday afternoon Zayas and the NYSPHSAA will put out a 50-page document with specific guidance about the return of high school sports and procedures for each sport. It was drafted by the organization’s COVID-19 Task Force, officials from a cross the state assembled to devise a plan for sports during the pandemic.

“I know we share a strong conviction that the health and safety of our communities must come first,” Curran’s letter continues. “I’ve continued to advocate for the resumption of organized sports exactly because of its importance to the well-being of our young people. Youth are particularly susceptible to the negative effects of long-term sedentary lifestyles, and feelings of social and physical isolation. For some, school sports are a path to promising academic and career opportunities.

“Residents have demonstrated extraordinary ability to adapt to this crisis,” she adds, “and I’m confident they’re ready to adhere to the safety measures necessary to get our kids back on the playing field in a school setting.”

CHSAA schools will have fall sportsFootball, girls volleyball and cheerleading may begin practice Sept. 21, but competition TBA since classified as high risk by the state. Confusion over 'high-risk' designation for volleyballLong Island coaches, players surprised the sport is in the same category as football and lacrosse. HS sports in Nassau postponed; plan is to try to play in SuffolkThe governing body for Suffolk high school athletics voted to continue the statewide plan to have lower-risk sports begin practice and play on Sept. 21. Nassau school superintendents voted to postpone high school sports until 2021.