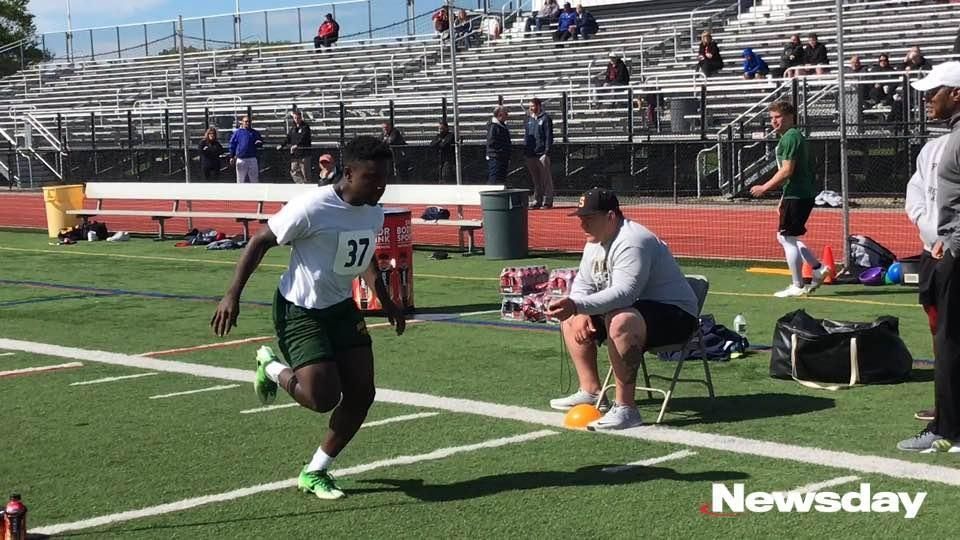 Lynbrook’s Jonathan Cabral-Martin might be his own harshest critic.

After all, he posted the top times in the 40-yard dash (4.62 seconds) and 5-10-5-yard shuttle (4.19), and best leaps in the vertical jump (35.1 inches) and broad jump (9 feet, 4 inches) in the morning session of Sunday’s Blue Chip Prospects high school football combine in conjunction with The Suffolk County Football Coaches Association at Sachem North High School.

“I could have done better, I know I have it in me,” said Cabral-Martin, a defensive back and all-around offensive threat. “I haven’t reached my max potential yet but I came out here and did pretty good, so I’m glad I left my mark on Long Island.”

Wyandanch’s Alonte Shipp and Eric Dennis pushed each other and their group of seven Warriors teammates. Shipp posted the second best vertical and third fastest 40-yard dash and Dennis posted the third best 5-10-5 shuttle time in the morning.

“It’s a lot of fun because we’re both competitive,” Shipp said. “We know if we both compete with each other, we can make each other better.”

“We just go out there and push each other to the limit,” Dennis said. “Because there is no limit.”

Sunday was the ninth annual high school combine with Blue Chip Prospects, but Suffolk Coaches Association president Hans Wiederkehr said Suffolk has been doing combines like this since 2001. The combine cost $115 for all athletes entering eighth through 12th grade this fall and included a week at Revolution Athletics, which is a speed, strength and agility facility in Bohemia, Wiederkehr said.

All drills were videotaped and results made available to interested colleges, he said. After the individual drills was a coaching clinic, featuring position drills and seven-on-seven passing drills.

“I just think it’s good for Long Island football, Wiederkehr said. “It’s another way for the kids to get their names out there.”

Before the combine began, the student-athletes had an NFL visit from Dalton Crossan, who signed with the Indianapolis Colts as an undrafted rookie free agent shortly following the NFL Draft. The Sachem North graduate from Lake Ronkonkoma used to participate in the same combine in high school before playing at New Hampshire.

Before the drills began, Crossan, a 5-11 205-pound running back, spoke about the importance of work ethic to get him in position to achieve his dreams.

“I remember I did this all throughout high school,” said Crossan, who leaves for rookie training camp this week. “I think it’s just good for exposure. It’s good to get these kids out here competing against each other. It definitely helped me to be able to put up some better numbers as I went on.”