Long Beach senior Hayden Levi is a key member of the only high school surfing program on Long Island. How does that make him feel?

"It’s pretty rad," Levi said. "We all shred together, so it’s pretty fun every day."

"Shred" is just another word for surfing in a sport that has a language all its own.

At Long Beach High School, the surfing club is more popular than ever. The program started 11 years ago with about a dozen surfers. There are 36 surfers on this year’s squad, a mix of both boys and girls.

"We’re all friends," Levi said. "We get together, watch films. It’s pretty sick."

The team practices multiple times a week, depending on the waves. Though New York is not known for big waves and surfing, the fall can be an optimal time for surfing on Long Island as hurricanes make their way up the East Coast, which creates a "swell," a term that means surfable waves.

"It’s an addicting sport," said junior Noah Gomez, who also plays on the varsity girls volleyball team. "I just want to do it every day." 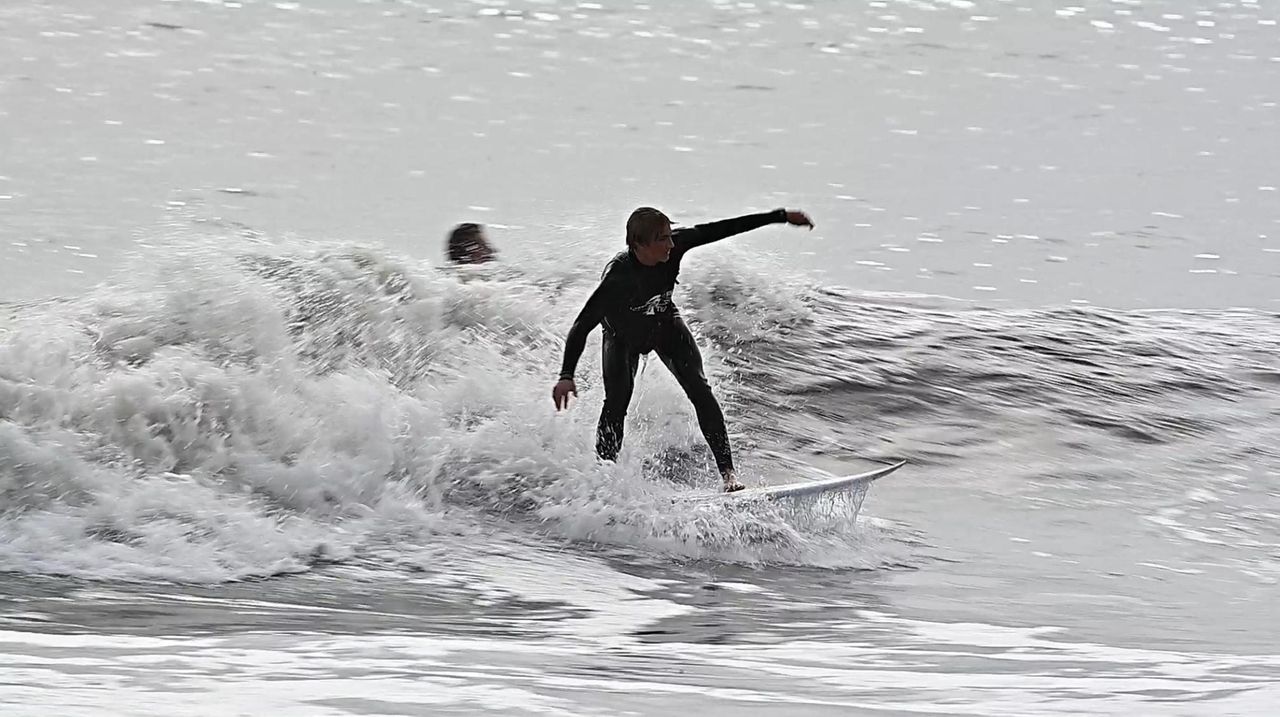 Though surfing is not considered a varsity sport, the team does compete. On Halloween, Long Beach placed fifth out of 15 schools at the National Scholastic Surfing Association Interscholastic Northeast Regional Championships in Atlantic City, New Jersey. The championships featured 13 high schools from New Jersey and one from Brooklyn (Yeshivah of Flatbush).

Levi made the finals in the individual longboard competition and finished sixth – a place that would have been higher had he not accidentally knocked into another surfer in the water, he said.

"It was definitely a lot of fun, good energy out there, lot of people on the beach – surfers, sponsors, cameramen," Levi said.

Surfing competitions are serious business. The team spent the fall practicing for this all-day competition. When the waves in Long Beach were good, they were in the water after school. When waves weren’t right for "shredding," the team got together to watch film and try to mold their surfing skills into a contest-ready format.

"In contests, you have to surf more conservatively," said Ty Thornton, a senior who made the semifinals. "I kept that in the back of my head, that how I would have to perform in the contest would be different from how I normally surf when I’m just surfing on my own for fun. We critiqued our style and made it more contest-surfable."

The team spends hours watching film to help improve on the water.

"We have two cameras that we use to record our practices and then we break down those films with the surfers, either after practice or during the day during the week when there’s no swell coming in," said coach Anthony Balsamo, an English and film teacher at Long Beach High School. "It's all about continual improvement. It's about having fun and really enjoying what the ocean has to offer."

In competition, surfers are put in the water for heats lasting anywhere from 15-30 minutes. It is their job to catch the best waves and "perform maneuvers in critical portions of the wave" to the satisfaction of judges. They are usually competing against five other surfers in the water, Balsamo said.

"It's actually in the [World Surf League] rulebook as ‘the more radical the maneuver in the more critical portion on the wave, the higher your points are,’ " Balsamo said. "We’re really just trying to encourage our surfers to score as high as we can on a scale of zero to 10."

Said junior Primo Simbari: "It's just all about making sure you're in the right spot and trying to just be in the right position to catch as many waves in that 15-20 minute time period."

After the pandemic forced Long Beach to miss last year’s competition, they were excited to get back in the water this year.

"I was pretty happy with my performance," Thornton said. "I picked some good waves, got to the spot, and did some nice turns."

To make the team, each surfer must pass a water test, assuring coaches they can handle themselves in the water – even if they aren’t the strongest surfers yet.

"We have surfers of all different skill levels on our team," Balsamo said. "We have some surfers who are just beginning. We have surfers who have been surfing almost their whole lives, and we try and welcome as many people as we can into our team that we can safely watch and help develop and grow."

Gomez balances her volleyball schedule with her time in the water. She said she surfed when she was younger and got back into it a few years ago. Halloween was her first surfing competition, and she made the semifinals in shortboard.

"I did really well catching as many waves as possible," she said. "Each heat is only 15 minutes, so you want to try and catch as many waves to score points and perform the best you can."

The surfing team was founded in 2010 by Danny Bobis, a former math teacher at Long Beach High School.

"[Bobis] had the vision to start the team," assistant principal Andrew Smith said. "He was able to kind of get it off the ground."

Bobis went missing while surfing in Indonesia in July 2011. His body was found four days later by fishermen. He was 32. A memorial surfboard stands in a Long Beach High School hallway in his honor, and the Laurelton Boulevard boardwalk was renamed Danny Bobis Beach.

"Coach Bobis was a pioneer in bringing this to Long Island," Smith said.

Rachel Lonergan, who was married to Bobis for three years, said Bobis loved surfing and the ocean and wanted to share that with students. Lonergan, who is a social worker in the Long Beach school district, coached the team from 2011 to 2019.

"Once he started the club, it quickly became one of the most well-attended extracurricular clubs within the school," Lonergan said. "He grew up surfing in Long Beach. A lot of these kids in Long Beach share this same passion. He wanted to be able to guide them and share that passion with them."

Like many of his teammates, Thornton grew up surfing in Long Beach. His parents surfed and introduced him to the sport at a young age.

"This is like more of a surfing community," Thornton said. "You go around town and you'll see a lot of surfboards on the roofs all over the place. There’s a lot of people on the beach every day, a lot of ocean people."

Sophomore Ruby Patton has been surfing since she was a kid and joined the team this season .

"Everybody's really nice and very welcoming," she said. "So it's a good community to be a part of."

Junior Aidan Cardo is in his third year on the team. He was born in New York, but lived in New Zealand for the first seven years of his life because his surfer parents wanted to live in a place with bigger waves and better surfing. He moved to Long Beach when he was 8 and finds himself constantly in the water.

Unlike land sports, where practice is a daily occurrence, the surf team can go days without being in the water if the conditions aren’t right. Sometimes, the water is too calm. Sometimes, it’s too dangerous.

"Even though some days the waves might not be the best," senior Billy King said, "you have to make do with what you’ve got and try to make every session great, no matter the conditions."

All in all, pretty rad.

Long Beach High School program brings surfing to kids of all abilities"Surfing therapy is what we're doing. It helps with building self confidence," said Cliff Skudin, co-founder of the program.