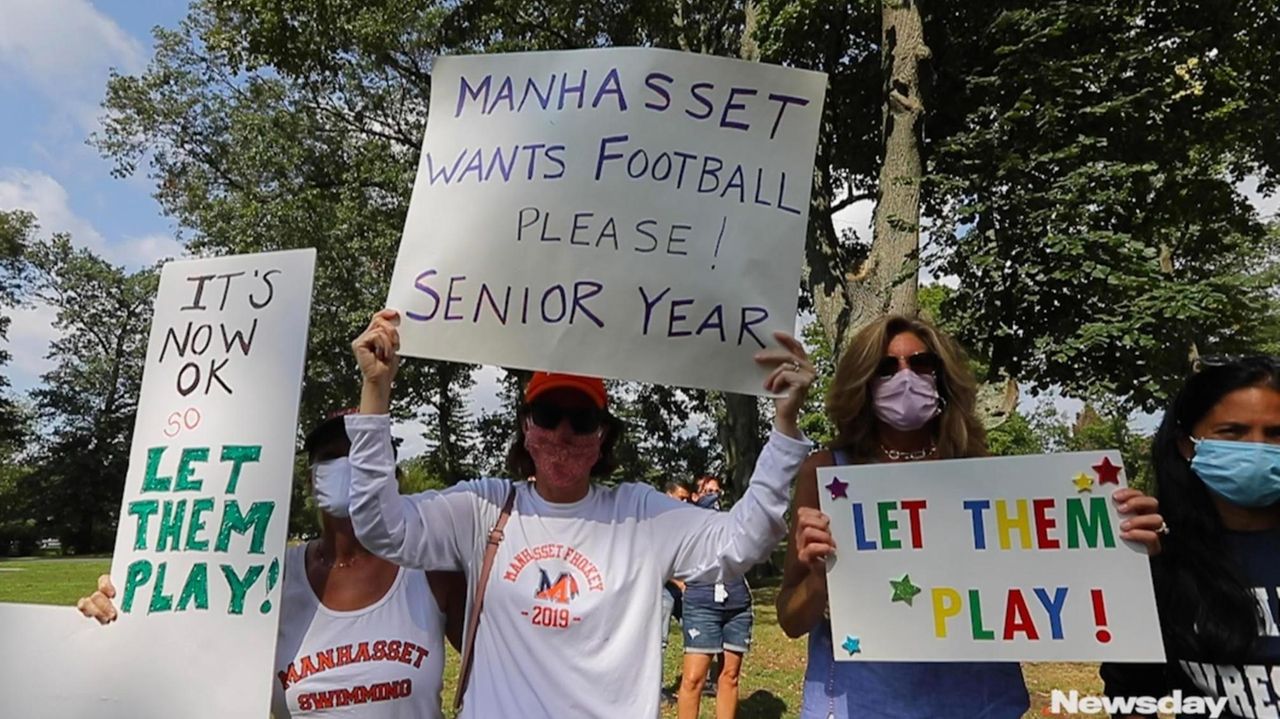 Protesters gathered in Nassau County on Friday after a decision was made this week by the county school superintendents, to postpone high school sports until 2021.  Credit: Howard Schnapp

More than 300 people gathered in front of the Section VIII administrative offices in Garden City on Friday displaying signs and chanting "Let them play!" On Thursday, about 100 people gathered in Hicksville to voice their frustration about the decision to postpone. Numerous online petitions have been circulating as well.

“We hear you,” Grishman said Friday. “We’ll continue to evaluate scientific feedback from the Centers for Disease Control, the Department of Health and the state education department. We’re not ignoring what people are saying in our communities. We do understand that we have kids that have a love for football and soccer and all sports and we hear the message that they want to play.

“Let’s see what the next couple of weeks brings and reassess the situation. Is it within the realm of possibility that the CDC, DOH or state education department, any of those agencies, changes the current guidelines? It’s possible. And then we would take a look at fall sports and evaluate the evidence.”

Gov. Andrew M. Cuomo announced guidelines for lower-risk high school sports to return on Sept. 21. Section VIII, which governs Nassau high school sports, held a meeting of its Superintendents Board on Wednesday to discuss how it would proceed. The board voted 7-0 to delay sports until 2021. The plan is to hold the three high school seasons — fall, winter and spring — between January and June.

“We made it very clear that our position is that we are not having fall sports and we’ll reassess that position before Sept. 21,” said Pat Pizzarelli, the executive director of Section VIII. “We’re leaving the door open in the event that there is more scientific evidence that says it’s safe to go back and start sports. We’ll evaluate that when the time is right.

“I’ve received plenty of support from people who truly believe that to wait is the prudent thing to do,” Pizzarelli said. “We’ve received a few letters that have resonated with our decision to hold off on sports until we see what classes look like when we get back to learning. I have a letter from a pediatrician that said we made the wise decision.”

Jack Murray, a sophomore running back at Plainedge High School, was in attendance at Friday’s rally.

“I just think that this is unfair,” Murray said. “I’m on a travel team for lacrosse, and we’ve played in multiple tournaments. I don’t understand why they postpone when people have already been playing sports during the summer. This year I was supposed to play a lot. It was supposed to be my year.”

“It’s a tragedy,” said Murray’s father, Jack Murray, 54. “We were told to flatten the curve, we’ve crushed the curve. We’ve been following the governor’s advice the whole way. He says we can play — it’s OK to play. The superintendents and the committee should allow these kids the opportunity to play. Suffolk County is less than five miles from where we live, and they’re allowing their kids to have the opportunity. We just want that same opportunity.”

Pizzarelli added, “I understand and I’m completely sympathetic to the way all the high school sports people feel. And it’s not just about them. The decision affects so many people including coaches, trainers, supervisors, bus drivers, chaperones and others in field maintenance at the schools. This impacts many, many people. They are feeling the effect of no sports. They’re losing money because they’re not working.”

With Michael Ruiz and Laura Amato