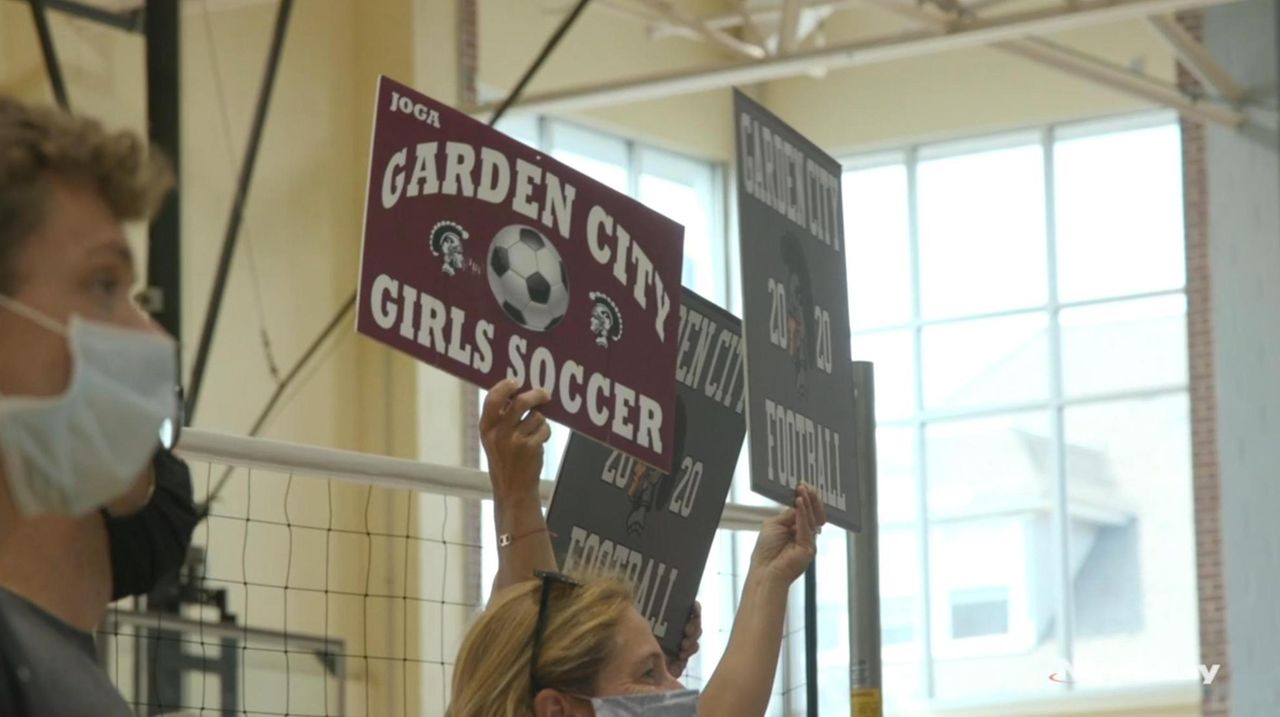 Town of Oyster Bay officials held a rally at the Hicksville Athletic Center to make the case for a fall high school sports season in Nassau County on Thursday, Aug. 27, 2020, a day after high school sports in the county were postponed until 2021 during an emergency meeting of Nassau's council of school superintendents. Credit: Kendall Rodriguez

The chants of “Let Them Play!” not only echoed through the Hicksville Athletic Center on Thursday, they reverberated around the virtual world as Nassau County residents held a demonstration and signed online petitions to protest the decision to postpone high school sports across the county.

Section VIII, the governing body for high school athletics in Nassau, held a meeting of its superintendents board on Wednesday, resulting in a unanimous vote to delay playing any sports until 2021 because of complications from the COVID-19 pandemic; all three seasons of sports would be played between January and June.

That decision came two days after Gov. Andrew M. Cuomo gave guidance that would allow high schools across the state to begin practice and play for sports with a lower risk of transmission on Sept. 21 as well as the vote in Section XI (Suffolk) to move forward with the statewide guidance.

The Section VIII Superintendents Board issued a statement on Thursday afternoon that said the opening of schools in September would “provide us with valuable data” and that “based on this data, Section VIII is committed to reassess its position prior to the Governor’s starting date of Sept. 21.” Section VIII executive director Pat Pizzarelli said “nothing has changed in terms of where we stand – we’re always open to new information.”

“Many of these kids have been playing all summer long, independently or in groups, even travel,” said Oyster Bay councilwoman and demonstration organizer Laura Maier. “Everything has been done in an efficient and safe manner [there]. So why should we cancel fall ball?”

Approximately 100 people attended the rally where Maier, Oyster Bay Town Supervisor Joseph Saladino and several students spoke. The event was held indoors and all who entered received temperature checks and were required to wear face coverings.

John Tucci, a Mepham senior boys soccer player, and James Gavnoudias, a Calhoun senior boys soccer player, posted a petition on Change.org to try to get Section VIII to reverse its decision. It read, in part, “this comes as a surprise to almost every athlete in Nassau County, especially since we were just promised a season a day before. Sign this petition to give Nassau County athletes a chance at sports in 2020.”

“We decided we might as well try to fight back so we set up the Change.org petition,” Tucci said. “We didn’t even think it’d blow up this much. We put it out there, we sent it to all of our schoolmates. It’s rocketed since then.

“Everyone in Nassau County is getting together and really fighting for the season to be what it was supposed to be.”

“Sports for any high school athlete is an extremely important aspect of their high school career – especially for the seniors [who] have been working for years toward what they want to get to,” Gavnoudias said. “Everyone I’ve spoken to recently is saying ‘I will do anything I can to get sports back in the fall.’ It means so much.”

“If we really believe in something, we can change [it],” said Island Trees senior girls soccer player Lauren Jablonowski, who also started an online petition. “We can create, we can get the answers we need [and] we want. We’re ready for change. We’re ready to figure it out. We want to have our voices be heard.”

In the Section VIII plan, three compressed seasons – each about nine weeks long – will be played between January and June. The fall sports that are not being played next month would take place predominantly in March and April.

“I tried to keep [my players] positive, just saying, ‘Look, it’s not canceled, it’s pushed back and we’re still going to have our season; it’s just going to be a little different,’” Island Trees girls soccer coach Danielle Hastings said. “Before you know it, they sent me petitions. They told me that they were getting other schools together, and I guess other schools had reached out them as well. I’m not surprised.”

Still, there was anger and tears of frustration at the rally. Many felt that not competing in the fall could hinder them with recruiting or scholarship opportunities and they worried about closure.

“This rally means a chance of playing again and a chance of going to a college that I want to attend instead of a college I have to settle for,” Locust Valley senior wrestler Lucas Johnson said.

“It’s so important, as a senior looking at colleges, getting yourself out there and wanting to play,” Massapequa senior girls soccer player Caroline Brucato said. “As your last year in high school, you really want it to be something to remember and not having a season, that’s devastating to me.”

HS sports in Nassau postponed; plan is to try to play in SuffolkThe governing body for Suffolk high school athletics voted to continue the statewide plan to have lower-risk sports begin practice and play on Sept. 21. Nassau school superintendents voted to postpone high school sports until 2021.