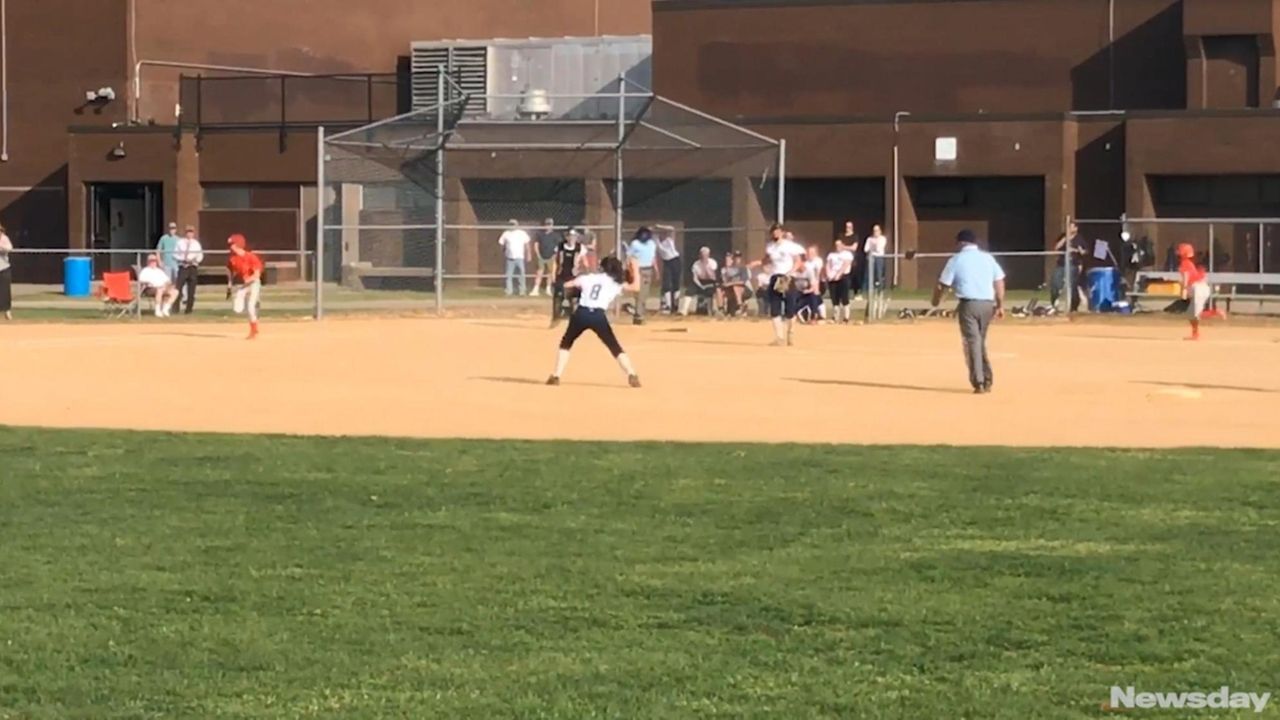 You could tell by Abigail Canelle’s reactions that this was more than just another regular-season game for the Smithtown West softball team.

Her catcher, Jill Meaney, noticed more zip in her pitches. The pitcher had a little extra height on celebratory jumps after a strikeout. Canelle’s first pumps were a little more energized.

That excitement displayed on the field translated to the scoreboard as Smithtown West defeated rival Smithtown East, 7-1, at home in Suffolk V softball Wednesday.

“I felt strong,” Canelle said. “I wanted to beat this team more than anything and I knew my team was going to come through for me. When we play together, we’re unstoppable.”

The junior scattered six hits, allowed one run, struck out four and walked one in a complete game.

“She’s always competitive but today, she really stepped it up,” Meaney said. “She was just hitting all her spots. She was throwing the heat, so it was good to see.”

And Meaney was productive at the plate as well, hitting a sacrifice fly to centerfield to drive in Sarah Chapman in the third inning to give West a 1-0 lead.

Smithtown West (11-2) broke the game open with a six-run fourth inning, led by back-to-back two-out, two-run singles from Meaney and Canelle, taking a 7-0 advantage. Meaney’s single drove in Miryah Paredes and Chapman and Canelle’s single brought in Alicia Killeen and Meaney. Kristin Horoszewski and Dani Badillo led off the inning with singles and came around to score and Gabrianna Lorefice had a sacrifice fly in the inning.

With the additional run support, Canelle felt even stronger returning to the circle.

“I love going out there pitching knowing my team has my back,” she said. “I know they’re always behind me, going to help me out. But knowing they wanted to win that bad, getting all those runs for me made me feel so confident to go out there and pitch my game.”

The lone run for Smithtown East (8-5) came on Jackie Pedley’s ground ball to drive in Courtney Hohenberger, who tripled to leadoff the fifth inning. Tori Hussey added two hits in the loss.

Smithtown West and East have another game Saturday evening, a matchup both teams always look forward to.

“Our team, especially these games, we get really hyped and we get excited,” said Lorefice, who went 2-for-3 with an RBI. “This is one of the most competitive games of the year. I’m proud of my team.”