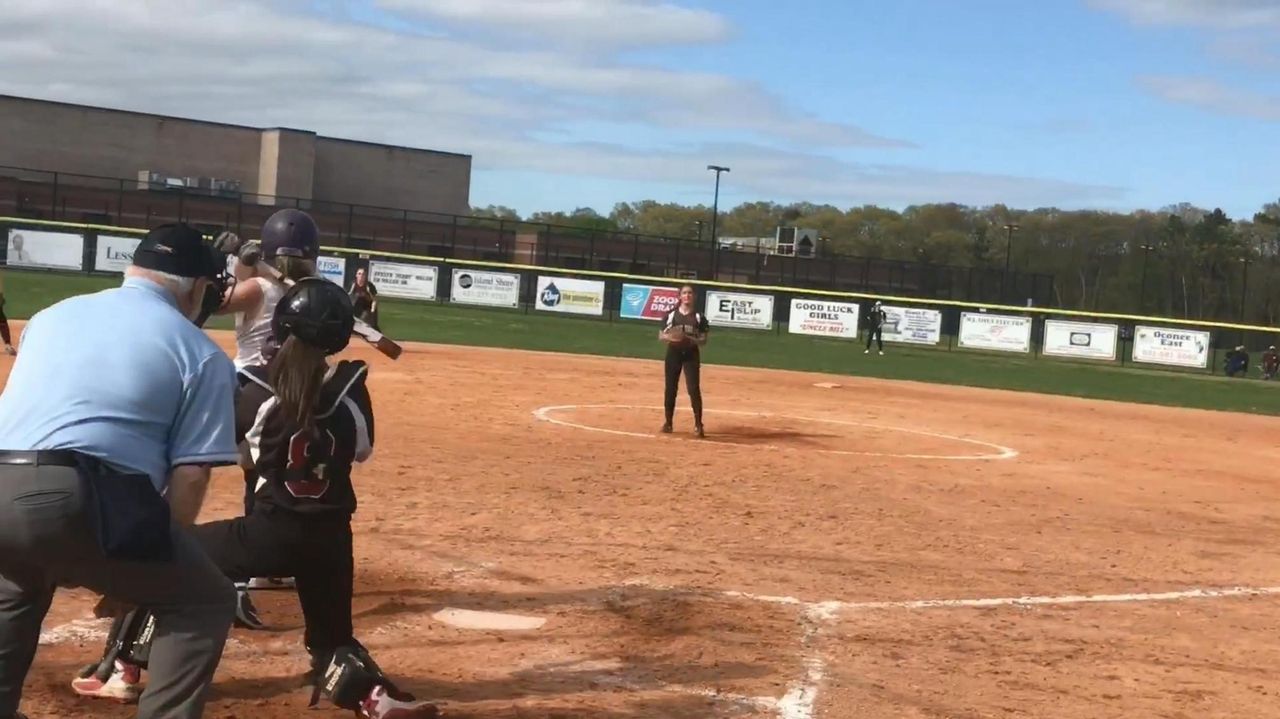 Allison Dell’Orto is no stranger to the circle, but this year, she expected to be spending more time outside of it.

The four-year varsity player pitched on-and-off over her first three seasons. But at the end of last year, East Islip softball coach Jason McGowan told Dell’Orto she’d be the primary shortstop, which is where she feels most comfortable.

But as the spring has gone by, Dell’Orto has been asked to pitch more often, forming a tandem with Kyra Kreuscher, which limits how familiar opponents can get with one pitcher.

“It was definitely a surprise to me,” Dell’Orto said. “But as soon as I stepped in I said, ‘I can pitch again, let’s see how I do’ and it’s like I didn’t even take a break from it. I’ve been hanging in there and it’s been working out for me.”

Dell’Orto surrendered two runs on four hits with one walk and 11 strikeouts over six innings in East Islip's 4-2 home victory over Islip in Suffolk IV softball Monday. Kreuscher tossed a scoreless seventh inning for the save.

“It just shows how unselfish she is,” McGowan said. “This is the toughest league in Suffolk County and when we’re playing these good teams and tough games, Allison has more experience than most kids in the county. She’s been with me for four years, she’s been through it all.”

Dell’Orto also catapulted the East Islip offense with a leadoff single, the first of four straight hits to open the game including RBI singles from Gianna Perretta and Jenny Murphy.

“If the people in front of you are hitting, then you can start getting excited,” said Perretta, who finished 2-for-3 with two RBIs. “The momentum’s up, everybody’s cheering and it feels really good to get up in those situations.”

Kaeli McAnally scored on a wild pitch and Julia Pastrana had a single to drive in Gianna Edwards for Islip (11-2).

Lauren Crawford went 2-for-3 with two runs scored and Murphy went 2-for-2 with an RBI and a run scored, along with four putouts playing a strong centerfield for East Islip (11-2).

“She’s arguably the best centerfielder I’ve ever coached,” McGowan said. “She makes it look easy, so for her out there directing as the captain of our outfield, I just feel so comfortable.”

Perretta said the players are "100 percent confident" in Dell'Orto in the circle, which shows through the team's play. And when Dell'Orto was asked to pitch more often, she was ready for the moment.

“I was just like ‘Just do it,'" Dell'Orto said. "There wasn’t really anything to it. I had to be there for the team.”

Islip vs. East Islip softballEast Islip defeated Islip, 4-2, in a Suffolk softball matchup on Monday, May 6, 2019.