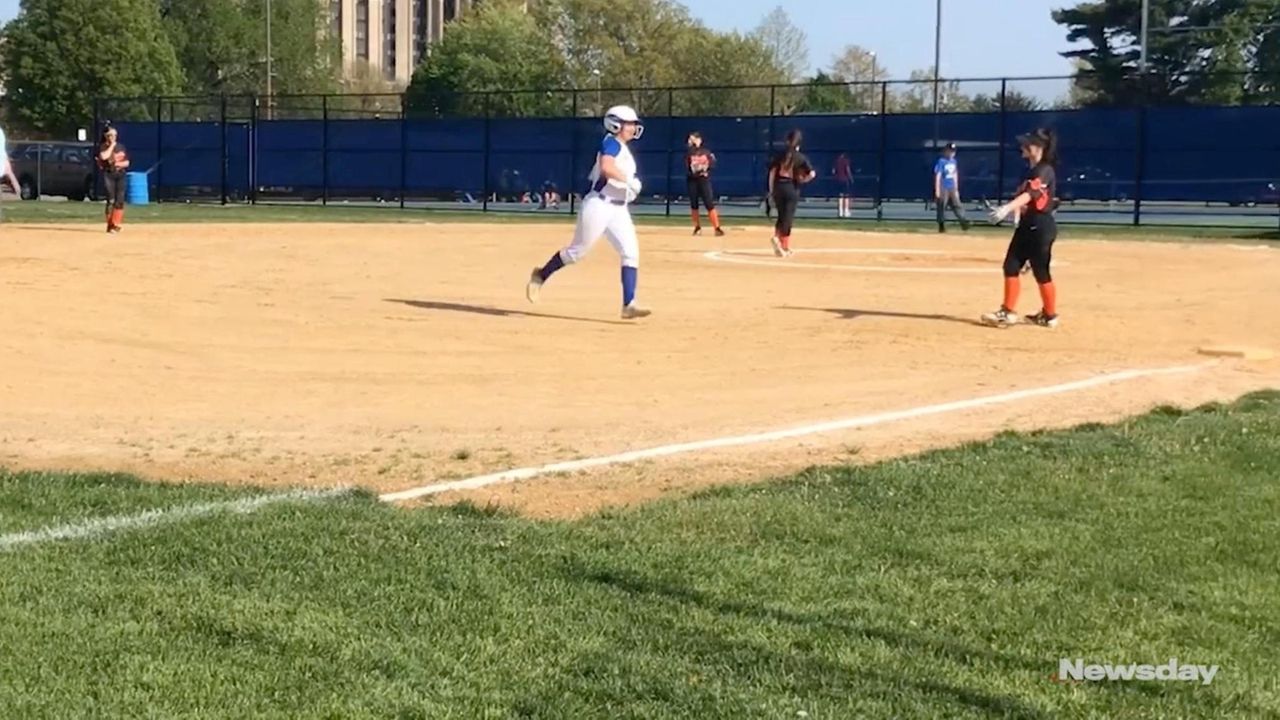 The East Meadow senior third baseman has provided a strong bat and a consistent glove throughout her varsity tenure, but this season, she’s become one of the most feared power hitters in the county.

“I worked a lot over the winter, so that was my goal, and I just hope to keep doing the same thing I’m doing,” Mallah said. “I definitely am going up to the plate with more confidence."

That confidence has translated to success, as Mallah is near the top of the Long Island leaderboards with eight home runs. She hit a three-run homer in host East Meadow’s 16-2 win over Hicksville in a Nassau AA-I/II softball crossover Tuesday, stopped after five innings because of run differential.

“With her, nothing surprises me,” coach Stew Fritz said. “She works on her fielding and her hitting as hard as anybody I’ve ever coached. If she’s not happy with her warmup, she asks me to hit her another 15 balls. That’s just what she does.”

Mallah, who finished 1-for-1 with three runs, hit her three-run home run as a part of a 10-run second inning for East Meadow (8-3). Jenna Laird went 3-for-4 — finishing a home run shy of the cycle — with three runs and two RBIs and Julianna Sanzone walked in all four at-bats, scoring three times in the win.

Grace Pohalski had RBI singles in the first and second inning and Alex Kelly added a two-run single. Amanda Thompson had two RBIs and two runs and Isabella Shepherd walked three times with an RBI and run in the win.

“When we are focused and have each other’s back,” Mallah said, “we can do special things.”

Kelly, who has taken over the primary pitching responsibility after the graduation of two-time Newsday All-Long Island selection Christina Loeffler,  has had what Fritz called a “phenomenal first half.” She surrendered two runs on four hits with one walk and three strikeouts Tuesday. And with a strong lineup and defense behind her, Kelly doesn’t put too much pressure on herself as a sophomore.

“It gives me confidence knowing that I can go out there and have a team behind me,” Kelly said. “They can always help if I get into trouble.”

Hicksville, a Nassau AA-II school with a 9-3 record including three wins over Nassau AA-I teams, had a two-run home run from Jessica Kwasnik.

And with the regular season unwinding, the Jets look to play their best softball heading into the playoffs, understanding they are consistently a team others aspire to defeat.