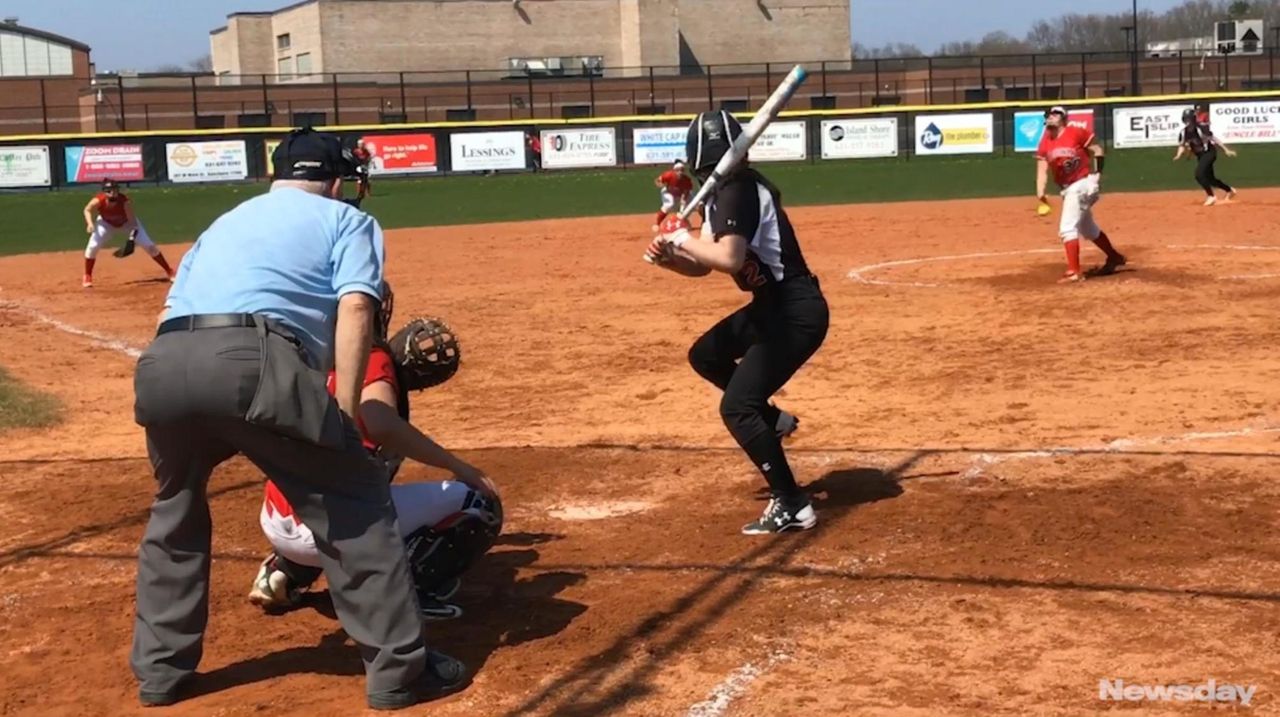 In a matchup of defending softball county champions, it’s no surprise seven innings isn’t enough to declare a winner.

With the score tied at 3 in the eighth inning Saturday, Sam Winegard led off with a single, stole second and scored following a throwing error on a ball put into play by Ashley Benvengo as host East Islip defeated Mount Sinai, 4-3, in Suffolk VII softball action.

“We’ve been looking forward to this game for a while,” Winegard said.

East Islip, the defending Suffolk AA champions, dropped down to Class A because of enrollment numbers and has adapted to the change, improving to 12-0. But it hasn’t come as easy as their record would indicate, as Saturday marked East Islip’s fourth extra-inning victory of the season.

“These are battles and it’s the best thing for us,” coach Jason McGowan said, who picked up his 200th career victory. “Going from AA to A, people think ‘They were pretty good in AA, this is going to be easy.’ No. These teams are tough. They are bringing out the best of us.”

Mount Sinai (10-2), the defending Suffolk A champions, opened a 3-0 lead in the second inning with RBI singles from Sam Valenti and Molly Birnstill, and Alaina Reilly drove in pinch-runner Grace Fiore with a sacrifice fly.

But East Islip pitcher Allison Dell’Orto settled in from there, not allowing another run and finishing with seven strikeouts in eight innings.

“As the game goes on,” Dell’Orto said, “you just get that adrenaline rush that you have to keep pushing harder as you get closer to winning.”

East Islip rallied with Kyra Kreuscher’s single to drive in Justine Rizzo in the second inning, followed by Katie Burk scoring on a wild pitch following her single in the third inning to cut Mt. Sinai’s lead to 3-2.

Winegard then delivered the tying hit with a single to rightfield to drive in Jenny Murphy in the fifth inning.

“I was just like to myself ‘You have to get this hit,”’ Winegard said. ‘“Get a base hit to score the run because you got to tie the game.’ ”

East Islip nearly had the game won in the seventh before Reilly threw out a runner at the plate on Burk’s single, starting a double play. But the players quickly responded by scoring the walk-off run in the following inning.

“It’s huge that we are not only getting into these playoff atmosphere games, but we’re winning them,” McGowan said. “It shows how tough and how resilient these kids are.”

For McGowan, it’s his 200th win in 13 seasons, spending three years at Half Hollow Hills West, three years at Plainedge and entering his seventh season at East Islip. McGowan, the son of Suffolk Hall of Fame coach Jim McGowan who won six state championships and finished with a 609-88 record in 27 years at Bay Shore, improved his record to 200-81.

“Just a credit to all the girls that I’ve coached for years believing in my system and my principles,” McGowan said. “I’m just fortunate enough to coach a great bunch of girls over these years.”

“It’s great to be a part of it, especially because coach is great,” Winegard said. “It’s great that he has his 200th win.”

“He wants the best for us,” Dell’Orto added, “and we go out there just for him.”