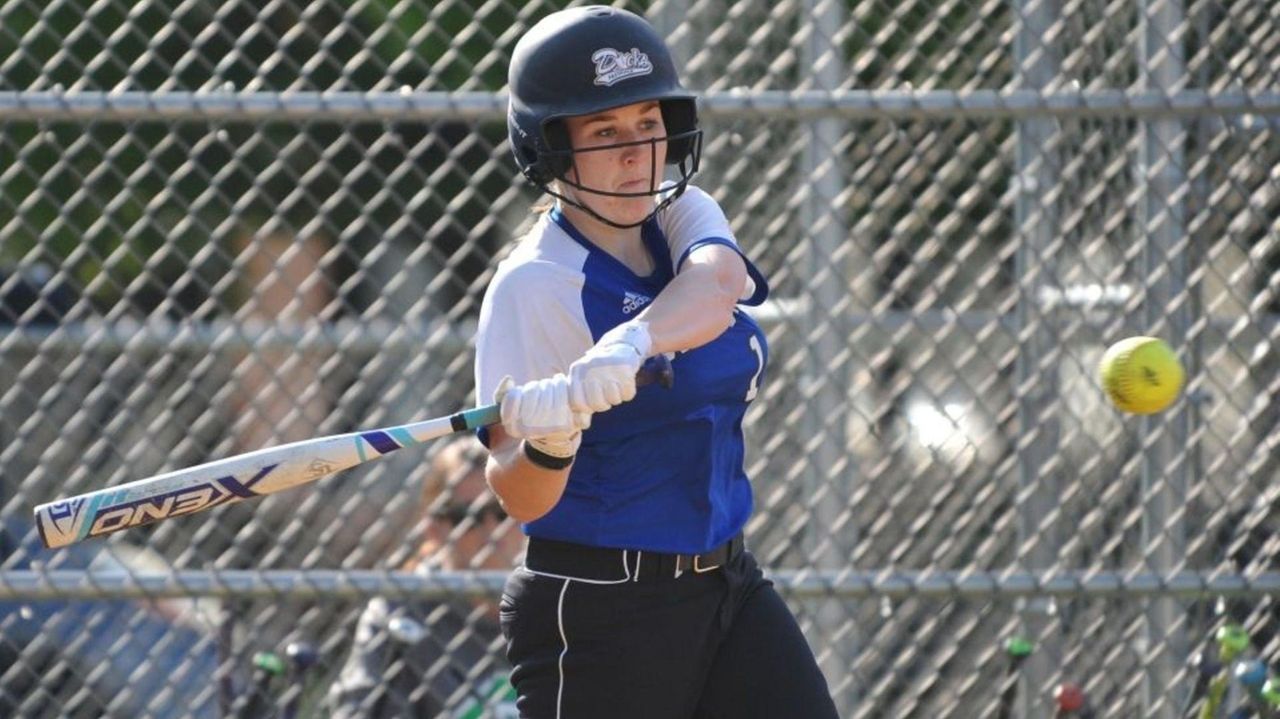 Lindsay Roman tossed a one-hitter with six strikeouts as No. 6 Calhoun defeated No. 7 Farmingdale, 4-2, in Game 1 of a best-of-three Nassau Class AA softball semifinal at Calhoun on Monday, May 14, 2018. Credit: Newsday / Owen O'Brien

When Lindsay Roman took the circle for Calhoun in the seventh inning of a Nassau AA semifinal softball game, she was aware she had a no-hitter. No matter how hard she tried to forget it.

“I wasn’t trying to think about it,” Roman said. “But I kind of knew.”

Roman was one out away when Farmingdale’s Christina Hassett blasted a two-run home run. But that was it for the Dalers against Roman in No. 6 Calhoun’s 4-2 victory over No. 7 Farmingdale in Game 1 of the best-of-three matchup.

Roman, a sophomore, retired the following batter, resulting in her second straight postseason one-hitter. Roman hit one batter and one Daler reached on an error. She walked none and struck out six.

“It’s insane,” Roman said. “I never thought it was going to happen and I’m proud of everyone.”

Even though Roman said she wasn’t expecting a second one-hitter, her coach, Jason Boland, said whenever there’s an important game he knows Roman will be at her best.

“It is so impressive,” Boland said. “It’s certainly not surprising because she has the fortitude to not let anything bother her.”

Calhoun scored all four of its runs in the fourth inning, highlighted by Roman’s two-run single that drove in Keri McLaughlin and Heather Berberich. Taylor Baumann followed with a two-run double with Hannah Aievoli and Roman scoring.

“It’s amazing,” Roman said about the offense. “Because I know that nothing is going to stop us when we’re all in sync.”

And with Roman pitching as well as she did, her defense and hitters wanted to perform for her.

“We all believe in her,” Baumann said. “We all know she’s a really, really good pitcher, and if she needs us, we’re back there. Seeing her out there making all those outs and striking everyone out makes us all hyped and gets us to want to hit more.”

“Those are big games for her,” Boland said about Roman, who has been on varsity since seventh grade. “And to think she’s so young is amazing because she has such a great mind for the game and guts of steel.”

Calhoun and Farmingdale finished first and second, respectively, in Nassau AA-II. Each team knocked off higher ranked opponents in the quarterfinals as Calhoun defeated No. 3 Baldwin and Farmingdale beat No. 2 Massapequa. The Colts are looking to prove themselves a championship caliber team as they are one win away from the final.

“I don’t think anybody took us seriously when the season started,” Boland said. “But as the year has gone on, the team has really grown together as a team that I think we can go up against anybody.”