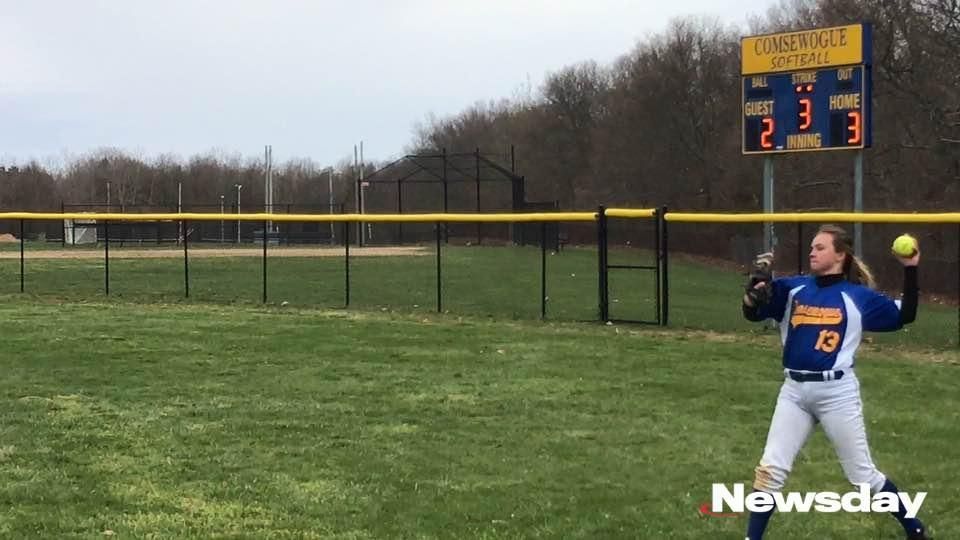 A name like Papagianopoulos isn’t the easiest to say or spell, sometimes even for teammates. After nailing her rendition, Katlynn McGivney felt ready for a spelling bee. Melissa Marchese called it a hard one, but claims she knew it.

Joy Papagianopoulos could only laugh skeptically and respond, “Yeah, OK.” But the Shoreham-Wading River shortstop’s name is one to know, even if it takes a double or triple check on the spelling.

Papagianopoulos hit one of the Wildcats’ three home runs in a 13-10 victory over host Comsewogue in a Suffolk VIII/IV crossover game Wednesday, when she was 2-for-4 with four RBIs. Bailey Rand and Marchese also homered, with Marchese connecting in the first inning.

“It felt great to start us off with a solo home run,” Marchese said. “Just to start a spark for the rest of the game.”

Papagianopoulos, who has five homers this season, said the Wildcats didn’t try to change their approach with Comsewogue’s short fences in their sights.

“I always just try to go for a line drive and see where it goes,” she said, adding that she once heard Derek Jeter say something similar.

McGivney also excelled at the plate, going 4-for-4 — missing only a home run for the cycle — with a walk and five runs scored. She was able to trot home a few times courtesy of Papagianopoulos and Marchese.

“That’s my job, to lead off to get on so these two can hit home runs,” McGivney said. “So I was happy I did what I did.”

Comsewogue (7-3) made a late run, scoring four runs in the seventh. Emily Whitman led the Warriors with a two-run home run, her third homer of the season, in the third and finished with two runs and four RBIs. Kristina McConnell added three doubles, two runs and two RBIs, with Alexa Murray and Taylor Graves each delivering two hits.

“It’s really exciting,” McGivney said. “We were devastated last year not making the playoffs, so the fact that we’ve clinched it so early in the season is really great.”