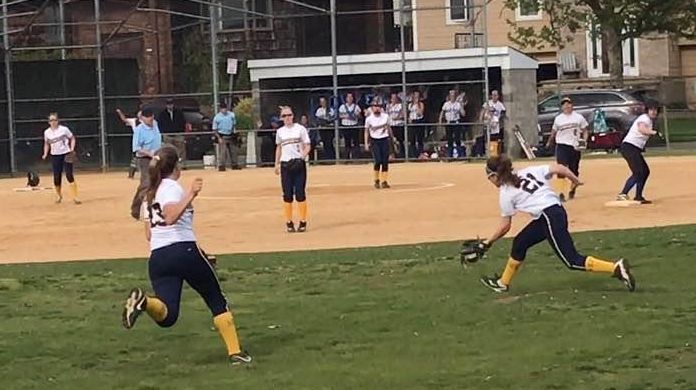 The Massapequa outfielder went 5-for-5, including delivering a slap-hit, two-run single in the eighth inning, perfectly placed between the pitcher and second baseman and rolled deep enough for two runs to score, giving the Chiefs a three-run lead in their 7-5 softball victory over host Long Beach to tie the Nassau Class AA semifinal series at one.

“My heart was racing because those are the moments you play for,” DeFina said. “Two strikes, you just want to get it down, just get the ball in play and trust my legs. When I saw it go through, I was like ‘We got this. This is it.’”

No. 2 Massapequa (12-5) hosts No. 3 Long Beach (12-6) in a winner-take-all Game 3 at Berner Middle School Wednesday at 4:30 p.m. The winner plays No. 1 East Meadow in the Nassau AA championships, starting Monday at Mitchel Field.

But Massapequa was one strike away from elimination. After DeFina’s fourth infield single of the game in the seventh, she came around to score on Julia Ruocchio’s two-out, two-strike single to centerfield to tie the score at 4.

“I knew that the team was on the line, lose this game and we would have been done,” Ruocchio said. “I’d do anything for my team. It was on my shoulders, that pressure, and I was very happy.”

“I think that was amazing,” said pitcher Addie Jackson, who tossed a complete game for the win. “It was definitely essential to the game and I’m very proud of her and I’m just happy that kept us in the game and I was able to go out there and shut it down.”

Massapequa broke the tie in the eighth inning when Olivia Howes’ slide knocked the ball out of the catcher’s mitt after Julia Gibbons put the ball in play.

Massapequa opened a 3-0 first-inning lead on a two-run double by Ellie Egher and Alexa Kanceler’s RBI single. Long Beach answered with Katie Frisch’s double to drive in Taylor Haines and Colleen Mannle’s single to drive in Fiona Eramo in the third inning before Massapequa centerfielder Francesca Cuttitta threw out a runner at home trying to tie the score. Long Beach took the lead on Paulina Cardona’s two-run home run in the fifth inning.

“These kids, they have a fighter’s mentality and that was good old fashion softball, get them on, get them over, get them in,” coach Bret Malone said. “The girls answered the call and I give them all the credit.”