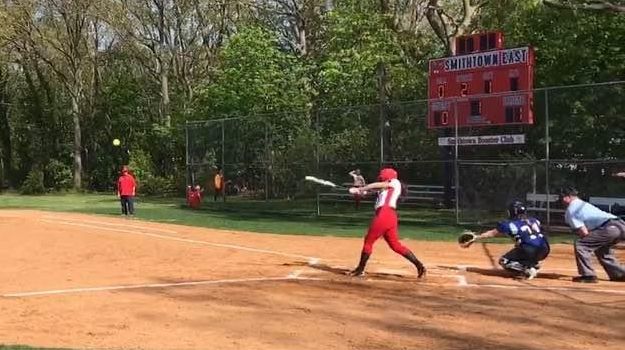 Her name is Morgan Catalanotto. But there are times when the Smithtown East senior softball player simply wants to be known as Morgan.

Not because she’s not proud of her last name. She certainly is.

But sometimes it’s difficult to have the surname of Catalanotto and play softball when your father is Frank Catalanotto.

The former Smithtown East baseball standout was drafted in the 10th round by the Detroit Tigers in 1992. He had a 14-year major-league career with Detroit, Texas, Toronto, Milwaukee and the Mets and recorded a .291 career batting average before retiring in March 2011.

“Sometimes it gets annoying because people expect a certain amount from me, and that’s what I felt like as an underclassman,” said Morgan, the oldest of four daughters to Frank and Barbara. “But then I realized I am my own person.”

No one understands that better than her Bulls softball coach.

“I’ve always treated her as Morgan and never as Frank Catalanotto’s daughter,” Smithtown East coach Glenn Roper said. “If someone asks if she has any relation to Frank, I’d say, ‘She’s Morgan.’

“I give her a lot of credit, because she’s created her own identity. She’s humble and she’s a great kid who’s consistently giving her best and always working hard.”

The Bulls’ captain had the best season of her career, according to Roper. She is batting .458 with a .525 on-base percentage and an .898 slugging percentage this season. She has 18 extra-base hits, including four home runs, with 20 runs and 27 RBIs.

Catalanotto plays rightfield and centerfield for Smithtown East, which won the League IV regular-season title. The sixth-seeded Bulls (15-5) will host No. 11 Half Hollow Hills West at 4 p.m. Monday in a Suffolk Class AA first-round playoff game.

But all of this almost didn’t happen for Catalanotto, who had injuries after her third varsity year of volleyball with the Bulls and with the travel Long Island Volleyball Club (LIVBC). She had thoughts of not playing softball this season.

“I had tendinitis from playing softball and sciatica problems from volleyball, so I was going to focus on getting better,” said the 5-6 Catalanotto. “But then I was like, ‘It’s my last year, and I can’t do that to my team.’ ”

Catalanotto’s father wasn’t sure how she’d play at the beginning of this season, but he quickly got an answer.

“If she or one of the other girls got a big hit, she was going crazy,” Frank said. “It just shows how competitive and fiery she is all the time.”

That passion isn’t limited to the softball diamond. The father and daughter play pool, throw the football around and do roller hockey together (as does the entire family). But the real battles occur on the Ping Pong table.

“She always wants to compete, and I don’t take it easy on her,” said Frank, who gives hitting lessons and runs clinics and summer camps at Baseball Heaven in Yaphank. “If we play four games, I’m trying to win. She gets mad and throws the racket down.”

Does it get too intense at times in the Catalanotto basement?

“It does,” the 18-year-old said with a chuckle. “I love playing Ping Pong with him. It’s so fun because we are both so competitive. I always want to beat him but I can’t. I keep wanting to take him down so one time, before I leave, I can beat him.”

Catalanotto, who has a 3.9 GPA, according to her father, has only a few months left before she’ll be a freshman at Salisbury University in Maryland, where she’ll study psychology and play Division III volleyball.

“I like volleyball better,” she said, “but I’m probably better at softball.”

But one thing is for certain: Morgan Catalanotto is her own person. “I like to think that I am,” she said. “That’s why I like having a different sport, because it’s not like [my dad] could critique me or tell me what to do, and nobody else could compare me to him, which was nice.”

It’s a point not lost on those close to her.

“I think it’s awesome she chose volleyball,” said Jillian Pesce, a volleyball teammate at East and a good friend of Catalanotto’s. “She’s not trying to take advantage of the legacy that her dad left her. She’s creating her own.”